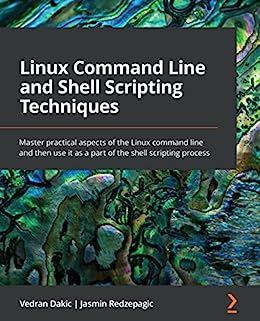 Linux Command Line and Shell Scripting Techniques: Master practical aspects of the Linux command line and then use it as a part of the shell scripting process (English Edition) Kindle电子书

Linux Command Line and Shell Scripting Techniques begins by taking you through the basics of the shell and command-line utilities. You'll start by exploring shell commands for file, directory, service, package, and process management. Next, you'll learn about networking - network, firewall and DNS client configuration, ssh, scp, rsync, and vsftpd, as well as some network troubleshooting tools.

You'll also focus on using the command line to find and manipulate text content, via commands such as cut, egrep, and sed. As you progress, you'll learn how to use shell scripting. You'll understand the basics - input and output, along with various programming concepts such as loops, variables, arguments, functions, and arrays. Later, you'll learn about shell script interaction and troubleshooting, before covering a wide range of examples of complete shell scripts, varying from network and firewall configuration, through to backup and concepts for creating live environments. This includes examples of performing scripted virtual machine installation and administration, LAMP (Linux, Apache, MySQL, PHP) stack provisioning and bulk user creation for testing environments.

By the end of this Linux book, you'll have gained the knowledge and confidence you need to use shell and command-line scripts.

This book is for anyone looking to learn about Linux administration via CLI and scripting. Those with no Linux command-line interface (CLI) experience will benefit from it by learning from scratch. More experienced Linux administrators or engineers will also find this book useful, as it will help them organize their knowledge, fill in any gaps, and work efficiently with shell scripts to increase productivity.

Chuck
5.0 颗星，最多 5 颗星 Worth it. I read this cover to cover. Very helpful.
2022年6月26日 - 已在美国亚马逊上发表
已确认购买
The book reads easily; the concepts are communicated to you in a clear and casual way as if someone is sitting with you and talking about them. I needed to get a better idea of what was possible and learn how to write decent bash scripts. Excellent book... looking forward to applying what I just learned.
阅读更多

Miguel Perez Colino
5.0 颗星，最多 5 颗星 Great book to get started with tips useful for more experienced admins
2022年6月19日 - 已在美国亚马逊上发表
A very nice book to get started on shell scripting. Very useful for people that are starting a career in system administration and DevOps. Very good complement to books to start learning how to manage linux systems.
The book is well structured and covers the basics throughly, creating a good foundation to feel comfortable with shell scripting and starting on programming for system administration. It extends to several good examples on how to apply knwoledge to common daily tasks.
I recommend it.