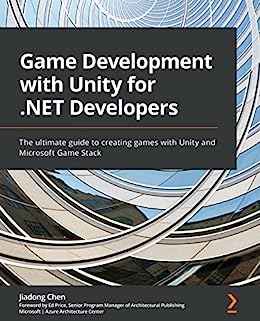 Understand what makes Unity the world's most widely used real-time 3D development platform and explore its powerful features for creating 3D and 2D games, as well as the Unity game engine and the Microsoft Game Dev, including the Microsoft Azure Cloud and Microsoft Azure PlayFab services, to create games.

You will start by getting acquainted with the Unity editor and the basic concepts of Unity script programming with C#. You'll then learn how to use C# code to work with Unity's built-in modules, such as UI, animation, physics, video, and audio, and understand how to develop a game with Unity and C#. As you progress through the chapters, you'll cover advanced topics such as the math involved in computer graphics and how to create a custom render pipeline in Unity with the new Scriptable Render Pipeline, all while optimizing performance in Unity. Along the way, you'll be introduced to Microsoft Game Dev, Azure services, and Azure PlayFab, and using the Unity3D PlayFab SDK to access the PlayFab API.

By the end of this Unity book, you'll have become familiar with the Unity engine and be ready to develop your own games while also addressing the performance issues that you could encounter in the development process.

Justin Horner
5.0 颗星，最多 5 颗星 A Book Worthy of its Title - Unity, DOTS, Azure and more
2022年6月3日 - 已在美国亚马逊上发表
"The ultimate guide" is a perfect title for this book. While I've read quite a few Unity-specific books, few go as in-depth on the fundamentals of game development and how to integrate with Azure cloud services.

The beginning chapters cover all the Unity basics (with many screenshots to help readers follow along), basic scripting concepts, developing UIs, creating animations, understanding the physics system, and integrating audio and video. The first two parts are as you'd expect from a Unity book. The author does a good job covering the basics, but part 3 of the book is where the fun starts!

Part 3 is all about advanced scripting! Here is where the author dives into the mathematics of computer graphics, the scriptable render pipeline, DOTS, and ends with how to integrate with the Azure Cloud using blob storage and PlayFab.

Again, this book is well-deserving of its title as the ultimate guide to Unity development. It covers so much that even if you have experience with Unity, there's probably something here to expand on your knowledge. I can easily recommend it.

Christopher West
5.0 颗星，最多 5 颗星 Excellent book for .net Developers that want to Learn Unity and Game Development!
2022年6月11日 - 已在美国亚马逊上发表
This book was an excellent read! As a .net developer for the last 20 years who is working on breaking into the Game Development sector of the industry, this book was chock full of knowledge that allowed me to pick up on the new Unity concepts while utilizing my .net expertise.

In the first few chapters, the book covers what Unity is and why you want to use it, how scripting works in unity, and the lifecycle of the Unity script processing pipeline. In the next part of the book, there are several chapters covering UI, animations, Physics, and audio/video concepts, as well as touching on a few performance tips. In the third part of the book more advanced topics are covered. Topics include game math, render pipelines, shaders, renderers, Unity's DOTS system, and serialization and assets management. The final chapter deals with utilizing Microsoft's cloud offerings via Azure for game development and assets management in Unity.

I found this book well written and useful and I recommend it to any .net engineer looking to learn Unity!
阅读更多
1 个人发现此评论有用

The book felt well ordered and precise in the sections as you start from the beginning. When things are set up so well I can't argue with calling it an ultimate guide and I hope the author continues his approach in future publications.

At not time did I feel lost and the amount that is covered can really help you get from point A to point B if you're genuinely trying to learn about Unity game development!
阅读更多
1 个人发现此评论有用

I've been an indie dev for the past 6 years or so and pieced together my understanding from blogs and online docs. This book has gone a long way to help me make sense of Unity and how all the pieces fit.

This book would be great for new Unity devs as well as those wanting to expand their knowledge. I suggest you have some understanding of C# before you begin. Though the script examples are not complex, it is not a C# primer.

If I had this resource earlier, it could have saved me many frustrating hours. The great thing is with the new things I have learned, I am inspired to try out some new things!

I have learned a lot from Jiadong's book and look forward to future publications. Thanks!
阅读更多
1 个人发现此评论有用

Travis A Lynn
4.0 颗星，最多 5 颗星 As advertised. Aimed for .net Developers.
2022年7月26日 - 已在美国亚马逊上发表
I don't often find any books that supply more information than what the Unity documentation present. As the book states, it is aimed at those with some fundamental understanding of programming & scripting.

The first few chapters are well structured and catch anyone up to speed with Unity. From there the book takes off with some more in-depth scripting and really helps readers understand the depth of what is possible. If you're looking to expand your scripting knowledge this is a great book to get into.

My one caveat keeping it from 5*, I would have liked to see more connections to game design best practices and how the programming aspects work in the larger scope of game development. Knowing what is possible is a great start and many will find it helpful. How to use these Unity systems appropriately in different game projects is another.

Overall I think it's a great asset to have on your shelf.
阅读更多