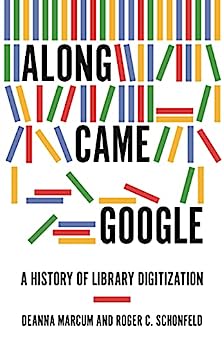 Libraries have long talked about providing comprehensive access to information for everyone. But when Google announced in 2004 that it planned to digitize books to make the world's knowledge accessible to all, questions were raised about the roles and responsibilities of libraries, the rights of authors and publishers, and whether a powerful corporation should be the conveyor of such a fundamental public good. Along Came Google traces the history of Google's book digitization project and its implications for us today.

Deanna Marcum and Roger Schonfeld draw on in-depth interviews with those who both embraced and resisted Google's plans, from librarians and technologists to university leaders, tech executives, and the heads of leading publishing houses. They look at earlier digital initiatives to provide open access to knowledge, and describe how Google founders Sergey Brin and Larry Page made the case for a universal digital library and drew on their company's considerable financial resources to make it a reality. Marcum and Schonfeld examine how librarians and scholars organized a legal response to Google, and reveal the missed opportunities when a settlement with the tech giant failed.

Along Came Google sheds light on the transformational effects of the Google Books project on scholarship and discusses how we can continue to think imaginatively and collaboratively about expanding the digital availability of knowledge.

Brad Pritts
5.0 颗星，最多 5 颗星 Well told history
2021年10月19日 - 已在美国亚马逊上发表
已确认购买
To put my comments in context it may help to know a little about my background. I hold a bachelor’s in computer science from Ohio State – completed 1975, a time when OSU was a leader in library automation with an early online catalog, developed in collaboration with the Ohio College Library Center, now the cataloging behemoth OCLC. I’m also a Michigan alum. My wife is a career long Technical Service librarian who started typing catalog cards; became an OCLC user; and has worked with multiple library bibliographic systems. This included her employment for nearly a decade at the University of Michigan, where she has met several of the individual leaders in the book, though never working in this project herself. So I consider myself a well informed bystander.
I found the history of the early digitization of the catalog well documented.
The moves toward digitizing full text were fascinating. I was aware of some of the early efforts here and they are well described. And the Google/Google Books story is told well.
The difficulties in establishing collaborative organizations are documented reasonably well; it is ironic that an obvious point of concern – the different perspectives of Google as a for profit and the libraries as nonprofit was easy to see. More subtle was the fact that many of the universities approached regarding the Hathitrust were concerned that Michigan would control the processes. Trust and collaboration has its limits, even with nonprofit universities.
There is just one area where my perspective differs from the authors. In multiple areas, Marcum and Schonfeld characterize the Google/publisher/author legal dispute as “legal wrangling” and minimize the substance of the concern. I have a strong personal bias in favor of IP protection, and therefore consider this far more than legal technicalities. If you came into my garage and drove my car away without permission in advance, I’d be unhappy even if you told me that you would get the oil changed and fill the tank before you returned it! Why do so many people seem to think that IP is more trivial than physical/ personal property? The authors do state that many of the participating universities’ legal counsel were concerned on this point as well. If the authors and publishers really believed in this attitude, perhaps they should offer the book at no charge, with licensing by the Creative Commons. But they chose traditional copyright by their distributor, and specifically remind all that permission is needed to reproduce in any way!

avid reader
1.0 颗星，最多 5 颗星 Virtually unreadable
2022年1月26日 - 已在美国亚马逊上发表
Dry awkward language. I wanted to read about the machines used to read books, to convert images to text, and to make the text searchable. All that is such a marvelous series of innovations. It is a shame that that is not even addressed.
阅读更多

Ginny
5.0 颗星，最多 5 颗星 Decent Sad History, From a Participant
2021年10月25日 - 已在美国亚马逊上发表
已确认购买
As one of the founder of the Universal Digital Library at Carnegie Mellon University (who actually did the first 100 book projects), I found this is book about as good a history as could be written on the subject of making digital writings accessible to all. The book captures some of the essential detail and like most high quality newspapers lets the truth leak out.

It is definitely a great read for people who want to understand the missed opportunities due to ignorance and greed. Sadly the protectors of books did not learn from history, at least the way most people would have liked, I think.

Recently Raj Reddy proposed an effort to get copyright laws adjusted for the digital age. I wholly agree with that. This effort was not addressed in this book except very tangentially.

Also, I wish the authors would read and appreciate "How Wikipedia Works" which is a book that describes how valuable content can be made free without single authors, with virtually no copyright, and made continually relevant. That is another book, besides this one, very much worth the study.

Again, the authors deserve credit for this history. I think the lesson that we (all the people on Earth) missed a series of great opportunities is pretty clear. That moment will not return as the digital universe evolves past it.
阅读更多
2 个人发现此评论有用