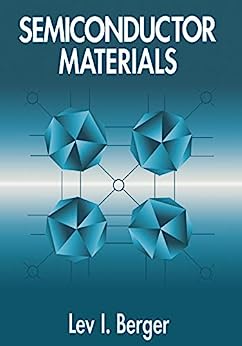 英语版本 Lev I. Berger (作者) 格式: Kindle电子书
属于：Physical Sciences References（1 本书）
|
分享
分享 <分享样章>
广告
显示所有 格式和版本 隐藏其他格式和版本
Semiconductor Materials presents physico-chemical, electronic, electrical, elastic, mechanical, magnetic, optical, and other properties of a vast group of elemental, binary, and ternary inorganic semiconductors and their solid solutions. It also discusses the properties of organic semiconductors. Descriptions are given of the most commonly used semiconductor devices-charge-coupled devices, field-effect transistors, unijunction transistors, thyristors, Zener and avalanche diodes, and photodiodes and lasers. The current trend of transitioning from silicon technology to gallium arsenide technology in field-effect-based electronic devices is a special feature that is also covered.
More than 300 figures and 100 tables highlight discussions in the text, and more than 2,000 references guide you to further sources on specific topics. Semiconductor Materials is a relatively compact book containing vast information on semiconductor material properties. Readers can compare results of the property measurements that have been reported by different authors and critically compare the data using the reference information contained in the book.
Engineers who design and improve semiconductor devices, researchers in physics and chemistry, and students of materials science and electronics will find this a valuable guide.
阅读更多
›  查看更多商品促销信息

W Boudville
4.0 颗星，最多 5 颗星 A Good Reference, Rather than a Text
2004年1月24日 - 已在美国亚马逊上发表
Brings together under one cover a diverse compendium of physical, electronic, magneto-optical and other properties of the most common semiconductor materials, including of course silicon and gallium arsenide.
There is also data on less frequently used compounds, like other 3-5 and 2-6 materials. Typically, these might be more of interest to a physicist or chemist than to an engineer, as these are more research oriented.
Various semiconductor devices are also described, like tunnel diodes and Zener diodes. Here, perhaps, this book faces more competition from other books that are explicitly on semiconductor devices. In this book, the descriptions are mostly just that, descriptions. Whereas other semiconductor texts would give lengthier, explanatory passages.
The book claims to describe the transitioning from Si to GaAs in MOSFET manufacturing. A bit of a stretch. Yes, GaAs is heavier used in certain, high speed devices. But the vast majority of MOSFETS are still Si based, and there is no indication of that changing.
In summary, the book is more of a reference than a text. Its best value is in the gathering of the material properties and the references therein to the original papers from which these are collated.