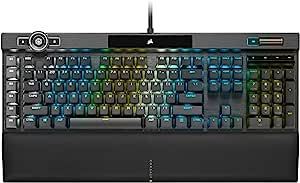 Sae
4.0 颗星，最多 5 颗星 A solid keyboard, but the k95 was just built slightly better.
2020年10月17日 - 已在美国亚马逊上发表
样式: Cherry MX
This is a test of the typing on the Corsair K100. It seems very different from the K95 Platinum. I don't know if I enjoy it more or less than the previous version. I think it sounds a little clunky, but not too bad. The optic switches are insanely fast.

I don't think there's a huge difference between 1000hz polling and 4000hz polling. I'd like to think I can see a difference with my typing and gaming, but I really can't. I don't seem to have too much trouble finding the keys without looking at the keyboard, so that's a plus. I also only really type with my thumb and two forefingers, so this keyboard seems to be better, as the keys are less spaced out than the k95 Platinum. The "U" key seems to give me a little trouble.

The scroll weel is kinda pointless. I can't think of a real reason to use it, so it's just going to sit on my keyboard looking fancy. I think that if you already have the k95 Platinum, then you should stick with it, especially if you're thinking about getting the speed switches for the k100, as they are the exact same switches. The only reason I could see upgrading is for the optic switches, which are super touchy.

Going into detail on the optic switches, I swore I wasn't going to notice a difference, but I did indeed notice a huge one. Luckily, I'm already used to speed switches, so this won't be too hard to learn. Anyone used to any other switch should avoid this keyboard, unless you are willing to get used to the Speed or OPX switches.

When I bought the k95, I was coming from Cherry MX Blues. Anyone with experience with the Blue switches will tell you that they have an extremely clicky actuation point. They have a 2.2mm travel distance with a bottom of 4.0mm and require 50 grams of force to activate. Speeds are a lot quicker. They actuate at 1.2mm with a 3.4mm total travel distance. The force is similar at 45 grams. So as you may guess, it took a long time to get used to the speed and weight at which the Speeds activated.

Now, Corsair's OPX Switches take the Speeds a bit further. This is both impressive and intimidating, as the Cherry MX Speeds were previously considered the world's fastest mechanical switch. OPX actuates at just 1mm, which is insanely low. I can put my lightest touch, not bottoming out, on these switches and they actuate. I assume that, other than being optical and having a faster actuation point, that the rest is similar to the Speeds. I will say that due to how the keyboard and keys are built vs. the k95, typing is much louder on the k100. I would highly suggest some different or custom keycaps.

It is a well-rounded keyboard that's just a bit pricey for what you get. I don't think the wrist rest is anywhere near as well made as the k95. I hope we get a version like the k95 for the k100 in the future. The keys themselves feel... thinner? I dunno. I don't think they are. The scroll wheel for audio definitely feels a little cheaper than it's previous version. It's also hella touchy, moreso than the k95, which was already a problem for me. The media keys feel a lot jankier and wobble, whereas they never did on the k95. This next one is just personal taste, but I think the glass piece on the top center of the keyboard is unneeded, and not very attractive. I don't see the point of it, other than to say it has glass to up the price for "premium build materials".

I can't tell you much about the software. You'll have to familiarize yourself with the convoluted and over-complicated iCue software. I will say that after upgrading the firmware for the k100, it ported all my macros and lighting effects from the k95, which was a huge plus.

If you read this to the bottom, thank you. It was a type test in Word that turned into a very lengthy review. I enjoyed typing on these switches so much that I just kept typing and typing. I will continue to update this review if I run into any problems.

Edit 11/19: After about a month of owning this keyboard, there is a slight to glaring flaw, depending on which key this happens to. It's avoidable, but still extremely annoying for such a high priced product. The wrist rest will slide up with use over time. Eventually, this will push hard against the keys, either making them feel like they don't press, or making them stay down.

I ran into this problem a little while ago, but that was when I was moving the keyboard around. This time it inched up by itself and held my alt key down. It was a pain figuring out why my keyboard wasn't typing. I seriously thought it broke. Turns out the left side of the wrist rest was pressed up against the left side keys.

Corsair, if you read this, please make a K95-style wrist rest. I will gladly buy it over this memory foam nightmare you gave us.

Ethan
3.0 颗星，最多 5 颗星 More sensitive than expected.
2020年12月3日 - 已在美国亚马逊上发表
样式: Cherry MX已确认购买
Overall I like the look, feel, and speed of the keyboard. I do take issue with a couple things that I'd like you to keep in mind.

1) Cherry MX Silver switches are significantly more sensitive than I expected. I constantly fat-finger things when I'm typing. Sometimes I start turning left, only to realize that just the weight of my ring finger on "a" is activating it, when I don't even feel that I'm pressing the key.

These 2 issues get quite annoying, but I still like it, and will continue to work with it to build new muscle memory.

For context, I changed to this keyboard from Mad Catz STRIKE7.

UPDATE a week later: I give up. Switched back to my Mad Catz. I will not be buying Cherry MX Silver in the future.

I got over the G keys for the most part, but typing extra letters in every sentence got old quick.

Also, not for nothing, iCue really realllly sucks. It is not intuitive, and doesn't load the profile you had last, so you have to open and set it every time you turn on your computer. Also, the profiles are saved on the software, not the board, so it's full and lifeless unless you're running iCue. What is this, 1997?

I had never used MX Cherry 'short' switches before, and they have more of a mooshy feel than they do a 'snappy' feel than MX Browns, but I have to admit, after practicing a little bit I like them better than the browns. The short action requires very little effort to actuate, and it ends up adjusting your typing style from a tapping style to a gliding one. I can still burst up to 150WPM easily, which I was only able to achieve using my Das Keyboard Ultimate.

It's a little expensive. I just happen to be fairly prosperous right now, so I splurged a bit. I imagine to the ordinary consumer looking for a 'dollar per feature' comparison might find themselves better luck with an off-brand.