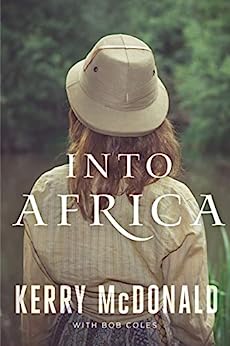 The untold story of 'Stanley and Livingston', and the woman who made their fame possible.

No one had heard from Janet Livingston's brother in years. The world-famous missionary and explorer had captured the imagination of millions with his book about his travels through the Colonial British Empire... but then he simply vanished.

So when Janet received a cryptic message from Africa, along with a necklace their father gave him, she knew he was still alive and needed her help. But a woman traveling alone to the farthest corners of the Empire was simply out of the question.

Enter Henry Stanley, the over-confident American explorer. All too happy to make his mark by finding David Livingston, he was not about to let a woman, of all things, slow him down. He'd lead the team, assuming Janet, who had never left her tiny Scottish town, would simply drop out before they even started.

INTO AFRICA is the thrilling story of Janet Livingston, her epic clash with Henry Stanley and her surprising relationship with their guide, Goma Foutou, amidst the brutal reality of a continent ravaged by the slave trade and European colonialism.

Fans of Chocolat and Apocalyse Now will love this "emotionally empathetic" adaptation. (Screencraft)

Sue Gaffney
4.0 颗星，最多 5 颗星 Into Africa interesting
2022年7月1日 - 已在美国亚马逊上发表
已确认购买
Intriguing read. Held my interest throughout the book and kept me occupied at a time in my life when I definitely needed distraction! Loved it. Thank you for a good story!
阅读更多

michelle levy
5.0 颗星，最多 5 颗星 Captivating
2020年10月4日 - 已在美国亚马逊上发表
已确认购买
This story introduced me to a world I might never have gotten a glimpse into. Terrific narrative that engaged all my senses... When the travelers encounter lions, it is truly hair-raising and haunting. I loved seeing this story through a woman's perspective. Themes of colonialism, intimidation, family bonds, and the roots of capitalism are explored, in a raw and real style. I felt for the characters, and would recommend this to historical fiction fans as well as anyone looking for a good international adventure tale.
阅读更多
6 个人发现此评论有用

yvonna Smart
4.0 颗星，最多 5 颗星 Exciting
2021年1月21日 - 已在美国亚马逊上发表
已确认购买
An adventure of a true story. Seeing Africa through the eyes of a Scottish spinster in the late nineteenth century. A look at slavery in Africa and the people who made money from human flesh.
阅读更多
3 个人发现此评论有用

Ann
4.0 颗星，最多 5 颗星 Fascinating read
2021年3月8日 - 已在美国亚马逊上发表
已确认购买
A page turning glimpse of Africa's beauty and multi-edged conflicts, just before the rush to colonize all of it. The heroine's exploits are fictional.
阅读更多
1 个人发现此评论有用