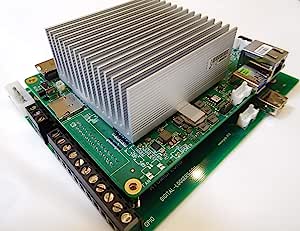 Thomas b.
4.0 颗星，最多 5 颗星 Bottom line: you're getting a salvaged x86 sbc for $40
2020年8月24日 - 已在美国亚马逊上发表
已确认购买早期评论人奖励(这是什么？)
Knocked off a star cause the power supply situation is atrocious (i mean how hard would it have been to put in a barrel jack, right?) but they're fix is to include the (enchilada) dev board which has screw terminal or molex (why???) power inputs. I got it hooked up with a switching power supply, its much less than elegant.

Other than that tho, for $5 more than a Raspberry Pi 4 (rn they $35) its a total steal. Like it literally feels like buying stolen merchandise you get so much for so little (actually iirc theyre salvaged from some failed robot). The enchilada board has a spot to solder in a arduino nano and a prototyping area amongst a thousand other features ill never use.

Is the Atomic Pi practical to use as a general purpose computer? No. Is it the best bang for your buck SBC? Who cares its only $40. That said its one of the few ambian fueled impulse purchases I haven't ended up returning yet.
阅读更多

ups user
5.0 颗星，最多 5 颗星 AtomicPis work well and are of great quality.
2020年10月5日 - 已在美国亚马逊上发表
已确认购买
Bought another AtomicPi for experimenting since the other two are now "working" utility servers. Below is my original review, since it still applies. I have been monitoring CPU temperatures and they have not exceeded 42deg C. Typical temps are consistent ranging from 39 to 42 deg C. I am comfortable with my decision to not add a fan. To power this one, I put a Molex connector on an old Compaq laptop power supply that provided 12v and 5v from a DIN connector. Yes... it is that old since laptop power supplies haven't provided those voltages this century. I prefer to repurpose working electronics... so I commend DLI again for saving and repurposing these SBCs as AtomicPis.

Bought two to use with OpenBSD as low power utility servers. Both SBCs work great. I love the Molex connectors on the breakout boards. They allow me to power both SBCs with a single small PC power supply without my having to make any wiring changes. Even a single SBC pulls enough current to bring the small 120W power supply into regulation without an added load resistor. The SBCs run very cool so I didn't add the fan I had planned on. Makes things super quiet. Any OS that supports UEFI booting should work, but there is no legacy bios support. Glad that these are surplus boards. Not only does this reduce e-waste, but it means that the physical quality of the SBCs is much higher than what could be produced at this price point. DLI did a great job on the breakout board that really helps to make these SBCs useable with minimal effort. I'll probably pick up a couple more in the future for some other projects. I actually appreciate that no power supply is provided. Most people considering these SBC's have plenty of options for powering them, and there is no point to inundate the world with more wall warts, not to mention the extra cost.
阅读更多
2 个人发现此评论有用

If you're looking for a cheap Atom based board this is okay, but... by the time you add a decent power supply and case you would be better off buying a used tiny ThinkCentre or similar machine. The form factor is unique so you either need to buy a $20 case or print one yourself.

If an SBC is what you're looking for then other platforms have better software support. Using the GPIO ports is a kludge compared to Arduino type boards.

Mine required more power than expected and ran warm enough that you can't leave your hand on the heatsink comfortably. I would recommend a fan unless you are planning on REALLY light usage.

I spent days fighting with bad drivers, drivers that were recommended on popular YouTube videos. Once you find the proper drivers it works okay, until then you can expect crashes. Even after I got the board working there were a couple devices without working drivers.

Having worked with computers since the 1970s I sometimes buy stuff like this to play with, this was not worth the time. I'll be sticking with Arduino, ESP32 and Pi typed products for future projects. Amazon has everything you need for these projects with mainstream support.
阅读更多
加入亚马逊Prime，从此免运费
亚马逊Prime会员可享海外购美/英/日/德跨境免邮，全年无限次！更有免费无限次阅读电子书服务
> 立即加入
了解我们
合作信息
帮助中心和购物指南