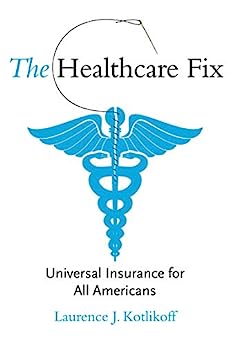 The shocking statistic is that forty-seven million Americans have no health insurance. When uninsured Americans go to the emergency room for treatment, however, they do receive care, and a bill. Many hospitals now require uninsured patients to put their treatment on a credit card which can saddle a low-income household with unpayably high balances that can lead to personal bankruptcy. Why don't these people just buy health insurance? Because the cost of coverage that doesn't come through an employer is more than many low- and middle-income households make in a year. Meanwhile, rising healthcare costs for employees are driving many businesses under. As for government-supplied health care, ever higher costs and added benefits (for example, Part D, Medicare's new prescription drug coverage) make both Medicare and Medicaid impossible to sustain fiscally; benefits grow faster than the national per-capita income. It's obvious the system is broken. What can we do?

In The Healthcare Fix, economist Laurence Kotlikoff proposes a simple, straightforward approach to the problem that would create one system that works for everyone and secure America's fiscal and economic future. Kotlikoff's proposed Medical Security System is not the "socialized medicine" so feared by Republicans and libertarians; it's a plan for universal health insurance. Because everyone would be insured, it's also a plan for universal healthcare. Participants—including all who are currently uninsured, all Medicaid and Medicare recipients, and all with private or employer-supplied insurance—would receive annual vouchers for health insurance, the amount of which would be based on their current medical condition. Insurance companies would willingly accept people with health problems because their vouchers would be higher. And the government could control costs by establishing the values of the vouchers so that benefit growth no longer outstrips growth of the nation's per capita income. It's a "single-payer" plan, but a single payer for insurance. The American healthcare industry would remain competitive, innovative, strong, and private.

Kotlikoff's plan is strong medicine for America's healthcare crisis, but brilliant in its simplicity. Its provisions can fit on a postcard and Kotlikoff provides one, ready to be copied and mailed to your representative in Congress.

Kotlikoff's book sends the strong message that all -- not just the uninsured, the elderly, the middle class, or the politicians -- are placing themselves and future generations in fiscal jeopardy through the current medical/financial free-for-all. Whether you agree with his solution or not, time is running out. Affordable medical care is everyone's problem. Most know John Donne's line, 'Send not to know for whom the bell tolls, it tolls for thee.' Fewer remember the more mundane words of the World War I trench ditty, 'The bells of Hell go ding-a-ling-a-ling for you but not for me...' The health care bells are ringing -- not just for you, but for me. Read Kotlikoff's book, ponder his solution, and be warned. -- Markley H. Boyer, MD, DPhil, MPH Tufts University School of Medicine JAMA Kotlikoff's passionate exposition of the details of his plan is sure to add to the growing health care debate. PW Web Exclusive Reviews With the earnest tone of a teacher aching for his students to understand, Kotlikoff creates a stark picture of our looming financial straits. TIME --此文字指其他 kindle_edition 版本。

Laurence J. Kotlikoff, one of the nation's leading experts on fiscal policy, national saving, and personal finance and a columnist for Bloomberg, is Professor of Economics at Boston University. His writings and views appear in Forbes, the Economist, the Financial Times, the Wall Street Journal, the New York Times, and other leading media outlets. --此文字指其他 kindle_edition 版本。

D
4.0 颗星，最多 5 颗星 Great Book
2010年9月12日 - 已在美国亚马逊上发表
已确认购买
As a nurse who is always looking for things to read about how to fix our healthcare system, this book is a must read. It is a short quick read and in my opinion, this author knows what he is talking about
阅读更多
1 个人发现此评论有用

Loyd Eskildson
4.0 颗星，最多 5 颗星 A Good Prescription -
2011年8月9日 - 已在美国亚马逊上发表
Healthcare is driving America to ruin, says author Kotlikoff. Today's Medicare/Medicaid/Social Security (MMS) payment per elderly is $30, 304 - 79% of current per capita income. In 1965 it was only 28%, and by 2010 it is expected to be 83% - about 10% of GDP in total. Medicare and Medicaid represent just over half the total MMS spending, and rising. Meanwhile, 47 million, almost one in five of working age and younger) have no health insurance.

Fee-for-service payment is the primary factor in excessive MM growth. The other is the amount of treatment received. One study found 31% of Medicare participants in 1987 were treated for 5 or more conditions, accounting for half of Medicare spending; in 2002 it was over half. This treatment growth, in turn, is acerbated by poor health habits - in 1987, less than 10% of Medicare recipients were obese, it's now over 20%. Variation in Medicare spending have little impact on prolonging life, per Wennberg et al.

Managed care has helped. In 1991, 9.5% of Medicaid enrollees were in managed care, not it is 64%. The annual growth in real Medicaid expenditures/year/enrollee during 1970-90 was 5.33%; only 1.02% since the early 1990s. Unfortunately, giving Medicare participants discretion in choosing whether to join an HMO has encouraged adverse selection, with good risks joining HMOs. In turn, the meant the HMOs were overpaid since they were reimbursed the average costs of all Medicare enrollees.

U.S. healthcare is the most expensive in the world, our outcomes aren't commensurate, and overheads consume 31% of spending (vs. 17% in Canada). Kotlikoff proposes universal coverage, with each American given an annual voucher to cover their expected costs. Tax breaks would be eliminated. Plans could offer rebates for healthy behaviors and acceptance of deductibles and co-pays.

Kotlikoff's recommendations are simple and sensible; my one wish is that his book incorporated information from other nations regarding how excessive payments, overheads, and service utilization are discouraged. For example, per material from Kaiser Permanente, U.S. providers are paid about 2X those in Canada.

Laurence Kotlikoff is an economics professor at Boston University. Mr. Kotlikoff thinks he's the Man with the Plan for universal healthcare in the U.S. The book he's written is a short, fast read which presents a straightforward message:

Medicare and Medicaid, because of their billing policies are bankrupting the country by feeding healthcare inflation. The fix, according to Kotlikoff is to scrap the two federal programs and replace them with universal health adjusted medical insurance vouchers. A young healthy individual would receive a small voucher say $5000 per year while an older less healthy individual would get a voucher of say $50,000 to buy a full private insurance policy.

This would incentivize private insurers to write policies for these insured as follows. If the oldster only needed $10,000 in health spending for the year the insurer profits by $40,000. OTOH if the youngster was hit with a $30,000 medical expense the insurer would take a -$25000 hit. The latter is less likely than the former. Also, the vouchers would be health history adjusted so that the older patient might get a lower voucher for having a good year.

What's attractive about Kotlikoff's fix is that the voucher system has a built in mechanism for monitoring spending, it eliminates cherry picking of patients and it's universal. However, as is the case with a short somewhat glib book Kotlikoff glosses quite a bit. He even glosses in error.

In one example he mis-characterizes Mitt Romney's role in signing a law that charges $300 per employer annually to fund health insurance for all in Massachusetts. The $300 fee was passed OVER Romney's line item veto. The main part of the bill is a punitive mandate that requires all taxpayers* acquire health insurance. Those who don't face monthly penalties enforced by Massachusetts' version of the IRS. The MA health insurance law funding comes in part from the $300 fee but mostly from shifting uncompensated healthcare funds to subsidizing premiums for poor and lower wage workers. The Massachusetts law does little to contain the soaring costs of the commonwealth's pet industry.

This kind of glossing is what troubles me about this otherwise interesting and provocative book. Kotlikoff is hardly naive about the economic and political realities facing his proposal. Libertarians don't like government programs. Healthcare professionals feel entitled to unlimited compensation. Patients want the best healthcare others' money can buy. Hospitals love their high tech profit centers. Then there are the myriad of big and small suppliers that profit from over priced products, waste and techno-churn.

America's healthcare problem is not the lack of universal healthcare. It's the lack of universal fairness in health insurance. Employer ensured workers, especially high income professionals, have their premiums paid. But they pay no taxes on this imputed income. An uninsured taxpayer showing up at the hospital had better have a bunch of high balance credit cards and be prepared for bankruptcy. Yet his taxes compensate for the lower taxes of his fortunate and better paid neighbor. Kotlikoff would do away with this asymmetry and use the 'higher taxation' to help fund his scheme. One could expect Republicans to rail against this while Democrats knee-jerk against vouchers. He also suggests savings and thus funding could be found in reducing administrative costs in the healthcare system. Good luck on reducing hospital fat and red tape. One other loose end in Kotlikoff's plan is where do the insurer's profits go? Shareholders? High CEO pay? Into lower premiums?

Notwithstanding its holes and loose ends Kotlikoff has made a provocative case that is a must read piece of food for thought. Regardless what you think of his proposed fix, Kotlikoff is right about one thing ... Our profligate healthcare industrial complex is threatening our fiscal future.

* In Massachusetts a young tax cheat can buy one of the special subsidized young person's
policies which doesn't require proof of income.
阅读更多
15 个人发现此评论有用

J. Davis
4.0 颗星，最多 5 颗星 Very thoughtful book but the conclusion is questionable
2011年7月15日 - 已在美国亚马逊上发表
There are essentially 2 parts of this book: the problem and the solution. I almost completely agree with his diagnosis of the health care disaster that is our system. Costs are out of control, many people are uninsured, and the various "solutions" being proposed won't help the problem (mandates, for one). He argues persuasively that the employer based system we presently have is unfair and inefficient.

As for his solution, it is better than our current system, but it is not the one I would choose. He would have the government be a "single payer" of health insurance, by giving every American a voucher they can use at any insurance company. The amount would be adjusted according to the cost of the insured person. I prefer a single-payer system, which would be much less complicated and costly than the voucher idea. As he himself points out, we waste far more health care dollars than any other country. Most of that is the insurance companies' cut.

At the end of the book, he says his plan would keep the insurance industry strong, competitive, innovative, and private. I can't say I care about those things--I worry a lot more about the quality of health care for Americans than the strength of the insurance companies. Like France, they should only be involved as voluntary supplemental insurance.
阅读更多
2 个人发现此评论有用
加入亚马逊Prime，从此免运费
亚马逊Prime会员可享海外购美/英/日/德0门槛跨境免邮，更有会员专享折扣！
> 立即加入
了解我们
合作信息
帮助中心和购物指南