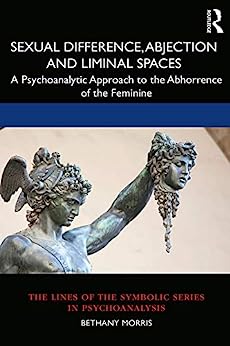 Sexual Difference, Abjection and Liminal Spaces: A Psychoanalytic Approach to the Abhorrence of the Feminine (Lines of the Symboic Series in Psychoanalysis) (English Edition) 1第一 版本, Kindle电子书

This book uses an interdisciplinary approach to explore the ways in which sexual difference can be understood as an encounter with otherness through the abjected, investigating social discourses and unconscious anxieties around "monstrous" women throughout history and how they may challenge these characterizations.

The author expands on Barbara Creed’s notion of the monstrous-feminine to give a specifically Lacanian analysis of different types of feminine monsters, such as Mary Toft, Andrea Yates, Lillith, and Medusa. Drawing on Lacan’s theory of "sexuation," the book interrogates characterizations of pregnant women during the Enlightenment, women who commit filicide, mothers in the psychoanalytic clinic, and women with borderline personality disorder. Chapters explore how encounters with a feminine subject in the Lacanian sense can manifest in misogynistic practices aimed at women, as well as how a Deleuzian notion of becoming-other may pose a challenge to their interpretation in a phallocentric meaning-making system. Creatively engaging the work of both Jacques Lacan and Gilles Deleuze, the text goes beyond simply identifying misogynistic practices by probing the relational, unconscious dynamics between hegemonic groups and those designated as "other."

Approaching the concept of the borderline from a critical and transdisciplinary perspective, this text will appeal to postgraduate students and researchers from Lacanian psychoanalysis, gender studies, cultural studies, and critical psychology.