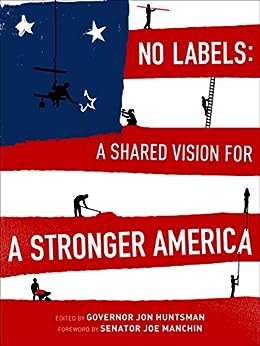 No Labels: A Shared Vision for a Stronger America (English Edition) Kindle电子书

Every year the President stands before Congress and the American people to deliver a State of the Union Address. What was once an opportunity for honest reflection on accomplishments and goals has become more of a laundry list than a speech—a grab bag of policy ideas, partisan rhetoric, and a healthy dose of wishful thinking. Meanwhile, the gridlock in Washington means that virtually nothing in that speech will amount to anything but talk.

Governor Jon Huntsman and Senator Joe Manchin, two of the most respected and straightforward political leaders in America, have a simple solution for Washington's gridlock. It begins with getting our leaders together at the table to agree to goals not just for their party but for the whole country.

In this book, Huntsman and Manchin are joined by experts and politicians from both sides of the aisle, including thought leaders from business, economics, and academia. Contributors include two former White House Chiefs of Staff; former OMB Director Alice Rivlin; Glenn Hubbard, Dean of Columbia Business School; nine members of Congress committed to solving Washington's endemic problems; and more contributors from every walk of life. These contributors are all making a loud call for a new process of running the United States of America.

“Politics doesn’t have to be a zero-sum game—we are going to share the future, and so we need to find ways to work together…a timely book.” —President Bill Clinton

“President Clinton and I disagreed on many things, but we did agree on two very large goals—balanced budgets and welfare reform. These shared goals allowed us to focus energy on bridging the gap between the parties…By proposing four large goals around which to rally the country, No Labels: A Shared Vision for a Stronger America lays the groundwork for a return to meaningful bipartisan accomplishment in Washington.”—Newt Gingrich
阅读更多
›  查看更多商品促销信息

Jonathan m. Topodas
5.0 颗星，最多 5 颗星 Compromise & Collaboration: No Longer "Dirty Words"
2014年2月19日 - 已在美国亚马逊上发表
已确认购买
In "No Labels: A Shared Vision For A Stronger America," former Utah Governor Jon Huntsman (R-UT) and former Governor and current US Senator Joe Manchin (D-WV) have set forth a vision for America and a path to get there. They challenge each of us (starting with Washington) both to turn our focus to the process of achieving shared national goals and to turn away from the politics of partisanship which increasingly has undermined any chance to advance the country's policy objectives.

Our political process has become a laughable national embarrassment. Over the last three decades we have allowed political posturing to swallow sound policy objectives. Making laws in Washington is giving sausage-making a bad name. Members of Congress look solely for momentary political street cred and care less and less about actually accomplishing something for the country. We have turned working across the aisle and compromise into dirty words as competing intransigent ideologies are fast becoming the death knell to passing legislation. The Congressional combatants merely move on to the next war of words while the rest of us suffer the consequences of their failure.

The health care debate of 2008-2010 is an unfortunate microcosm of what's wrong with Washington. One side primarily cared about passing a bill for the sake of winning, even if they had to pass it first to know what was in it. The other side sought only to defeat any health care bill and worse yet, to reject any "fixes" to improve the bill. All outside suggestions to facilitate real compromise were rejected by both sides. No fixing; just fighting. Neither side was on the side of everyday Americans.

Manchin and Huntsman are telling us enough is enough. In their book, they use a collection of personal accounts and reflections from political, business and other leaders to point the way for America to get its (government) act together: shared goals; commitment to collaborate and compromise for the common good; "fixing, not fighting." They have identified four issues critical to America's future (Jobs & Economy; Entitlement Reform; Debt & Deficit; and Energy) and have coupled them to measurable time-frame goals. The challenge is to rally our leaders to address these issues with a plan and a strategy.

No Labels, the group Huntsman and Manchin co-founded, was formed as a "citizen movement" to push our leaders to cut through the partisan gridlock to make government work--to promote a "new politics of problem solving." This group is all about getting everyday citizens (irrespective of party) engaged in the political process and focused on common goals while making it demonstrably comfortable for our legislators and leaders to actually work with (and not against) each other in order to forge the legislative solutions we so desperately need.

Reading this book is a good first step towards a better understanding of both the problems with government and the pathway to solving those problems. Anyone who believes that it is imperative that our leaders publicly and openly commit, to each other and the voters, to work together and embrace compromise should read this book. And we would be best off if our leaders in Washington began to practice what the book preaches.

Daren Coppock
5.0 颗星，最多 5 颗星 Finally a voice of common sense in politics!
2014年4月15日 - 已在美国亚马逊上发表
已确认购买
Love this book and the vision of No Labels. Political leaders are too focused on positioning for the next elections and affixing blame and not focused enough on finding common ground and crafting the long-term solutions that our country needs. It's a well-written book but also not overly complex. It also proposes some common sense national strategic objectives that can serve to focus our attention and ambition as a country, moving us past the mudslinging of our present political discourse. This is the best vision I've seen for getting past a dysfunctional Congress and a White House more inclined to ruling by unilateral fiat than finding common ground. Highly recommended. Hopefully this book and the No Labels movement starts to bear fruit in the 2014 elections.
阅读更多
1 个人发现此评论有用