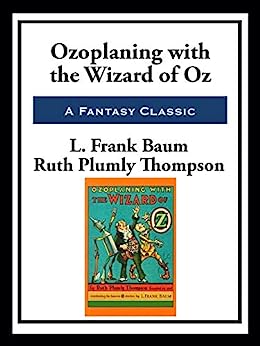 Ozoplaning with the Wizard of Oz (English Edition) Kindle电子书

英语版本 Ruth Plumly Thompson (作者) 格式: Kindle电子书
|
分享
分享 <分享样章>
广告
显示所有 格式和版本 隐藏其他格式和版本
Ozoplaning with the Wizard of Oz is the thirty-third in the series of Oz books created by L. Frank Baum and his successors, and the nineteenth and last written by Ruth Plumly Thompson. The Wizard unveils the newly created ozoplanes, and a chaotic flight takes them to a previously unexplored sky-country called Stratovania.
阅读更多
Previous page
Next page
›  查看更多商品促销信息

Sara M Remson
5.0 颗星，最多 5 颗星 Five Stars
2014年12月10日 - 已在美国亚马逊上发表
已确认购买
While this is not the same as the original books, Thompson does an incredible job with the story.
阅读更多
1 个人发现此评论有用

The Wingchair Critic
5.0 颗星，最多 5 颗星 The Oz Royal Family Takes To The Air
2003年3月4日 - 已在美国亚马逊上发表
1939 was a banner year for Oz: MGM studios released its classic film adaptation of 'The Wonderful Wizard Of Oz,' and Royal Historian Ruth Plumly Thompson issued her last official Oz novel, 'Ozoplaning With The Wizard Of Oz,' which, as serendipity would have it, was also one of her finest.

Sparing no detail and demonstrating Oz's reality principle, an elaborate cake has been prepared with a model of Dorothy's Kansas house in its center, the house that fell to Oz in a cyclone and happily, accidentally, and conveniently crushed the Wicked Witch Of The East.

The Little Wizard, who has grown quite stout, has another surprise: his latest invention, two airships that are equal part rocket, airplane, and hot air balloon. With Ozma temporarily away from the Emerald City, the group, accompanied by newly matured maid-in-waiting Jellia Jamb ('Jelly and Jam') and the Soldier With The Green Whiskers, take to the skies adventuring.

After several weak and disposable titles, Thompson's 'Ozoplaning With The Wizard Of Oz' has the distinction of being the fastest moving and most economic novel in the entire Oz chronicle.

There is no superfluous padding whatsoever, and, looking ahead to illustrator John R. Neill's 'The Wonder City In Oz' (1940), the novel has a loose, kooky, post-Romantic tone which perfectly suits Baum's utopist fairyland.

No longer a 'sweet, darling little maid' perennially restricted to the background, Jellia Jamb is modern young lady--not a little girl--with a feisty, determined spirit and a bright mind.

Happily, it is Jellia, and not Dorothy (who, in defiance of the laws of the kingdom, also seems to have matured considerably), who is the book's protagonist.

Thompson also allows the Scarecrow and the Tin Woodman to stand center stage, utterly freeing the characters from the dreary limitations Baum often saddled them with in his later titles.

Never has the Tin Woodman been this lively, decisive, vigorous, and comical. Thompson's characterization of the Cowardly Lion was the most realized of any of the Oz writers, a talent again demonstrated here. Thankfully, none of the lead characters are transformed into beasts, no overly-sweet or obnoxious sidekick animals are introduced, and no one speaks in broken baby talk.

Though the narrative eventually falls back on the overused idea of the Emerald City being invaded by outside forces, the writing throughout is so rollicking and enthusiastic that the inevitable invasion seems almost fresh.

In an unusual touch, Thompson has the only briefly seen Trot, Betsy, Tik-Tok, and the Patchwork Girl fleeing the invasion rather than heroically standing their ground.

In another refreshing twist, aggressive flying King Strut of The Strat decides to attack the Emerald City only after the Tin Woodman declares Strut's sky kingdom a new colony of Oz. Deeply offended when told that he and his people are now subjects of Ozma, Strut reasonably feels that it is his kingdom that has been invaded, and decides to take the offensive.

'Ozoplaning With The Wizard Of Oz' is one of the classic entries in the series, touching as it does on both established Oz history as well as Oz history to come.

At the fireside party in the opening chapters, early Oz history is thoroughly and joyfully recounted by the attendees.

Thompson's Jellia Jamb will remind readers of a kinder, less boisterous Jenny Jump, and the Wizard's cat-like "kit bag" of magic may have been the inspiration for Jenny Jump's "handbag of fairy gifts." For reasons unknown, Thompson changes the true name of the Soldier With The Green Whiskers from the established Omby Amby to Wantowin Battles ('Want To Win Battles'), but, regardless, the Soldier, who is far more of a coward than the Lion, adds excellent comic relief to the story.

As Oz scholars know, Oz is not only a non-earthly paradise but also an approximation of the Christian concept of the afterlife.

Presuming she is genuinely alive in the earthly sense of the word, Jellia will live to be a million, and, in fact, will live forever, since no one dies in Oz and only the unlucky or unfavored--like the Wicked Witch of the West--can be destroyed.

Not only does the opening chapter take the unusual step of informing the reader that it is autumn in Oz (one of the airships has been christened "the Oztober"), but, at the book's end, Dorothy mentions Halloween. Unfortunately the highly potent idea of celebrating Halloween in Oz is explored no further.

Reflecting the book's light, fun tone, John R. Neill's illustrations are among his most brazenly comic. Particularly interesting is Neill's drawing of Glinda the Good's castle in the red Quadling country, which is unexpectedly massive beyond belief.

Highly recommended for both children and adults, as well as for established Oz fans and new readers.