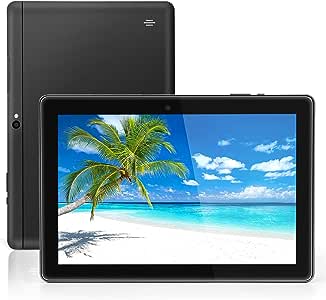 Barbara CA
5.0 颗星，最多 5 颗星 Beautiful picture, awesome battery life! Better than expected!
2020年3月11日 - 已在美国亚马逊上发表
已确认购买
I bought this to replace my daughters 3 year old LG tablet.. looking to save some money I decided to try out something different, so happy I did. What Drew me to this tablet mostly was the long battery life it claimed, And it really does live up to the expectations and more! The battery life is absolutely amazing. My daughter uses it on a regular basis and we’ve had it for a little over 2 weeks now and it holds a charge for a good 2-3 days.. also the picture quality is superb, it compares to my husbands 4K Television, Absolutely wonderful! Also Really powerful with fast search speeds.. This tablet really is all that I wanted and more.. extremely impressed! It even came with screen protectors so I didn’t have to go crazy trying to find the perfect size.. also very durable and lightweight for its size.. Highly recommended, Worth every penny!
阅读更多

JRRinBoston
5.0 颗星，最多 5 颗星 Great Daily Tablet
2020年3月22日 - 已在美国亚马逊上发表
已确认购买
The LLLtrade 10 inch tablet works fine for the price. The 10 inch IPS LCD display shows great colors and picture is sharp. The viewing angle stability is excellent. It's clear when reading with it on the couch. For watching movies, the large bezels make for ideal holding places and the screen is bright and clear.

The 4GB RAM is also adequate. Most apps and light games work fine as I did not expect too much for a tablet at this price point. I only use it for limited tasks - web browsing, browsing cloud photos, reddit, YouTube, Netflix and not a lot else. For video streaming or surfing the Internet, the tablet is fast enough and the screen is gorgeous.

The tablet runs the android 9.0 operating system. I really like the Google Assistant. I think it works as well as Alexa. Typing on the tablet is perfect. And you can actually easily expand the memory by putting a memory card in the slot, which takes seconds! So far the 64GB memory is enough for me.

All in all, I really do like it. It works as a fully functional tablet and is comfortable to use for entertainment and productivity.

willisota
5.0 颗星，最多 5 颗星 Great tool, great toy
2020年3月26日 - 已在美国亚马逊上发表
已确认购买
When I was young, I believed that by now, the news paper companies would have transitioned to all digital, and be giving tablets away for free to get you to subscribe. The phone companies did it first, who would have known.
This tablet though, it is almost exactly what I envisioned all those years ago.
It is light weight, so it doesn’t kill my wrist when I’m using it. It is sturdy piece of hardware though, which is unexpected with as light as it is.
I LOVE that it has a full size SD card port on it. That is so convenient for me I simply can not adequately express it. I have roughly a billion microSD adapters, so that’s no issue at all. But all of the SD cards and devices I have are fully compatible. Very nice.
It’s very quick too. Now I have iPads, but my last android based tablet lags so terribly it is not worth firing up for anything but frustrating myself. This one loads apps as quickly as my iPad does. And it lets me do lots the iPad doesn’t.
Some people try to focus on the iOS versus android debate, as if one is better than the other. They are tools, each with their better uses.
I find this very useful for pulling photos off of SD cards in the field, tweaking them, minimal photoshop type editing, and uploading them to the internet. This is an amazing tool for that.
The battery lasts for hours of use, and it charges fairly quick.
It is also great for running Netflix, Hulu, prime video, and Disney +. It is also great for loading up with ripped and downloaded movies. My grand daughter absolutely loves it in the car, as I have loaded hundreds of gigs of videos onto SD cards for her to watch. I love it because she is occupied.
It also connects nicely to her Bluetooth headset, so I do not have to learn again that the wheels on the bus do indeed go round and round too.
It came with a screen protector which is nice. These days it seems like even looking at a screen without a protector on it gives me a weak stomach. It’s nice knowing I was protected right out of the box with this.
All together, it is a powerful, and versatile tool. It works great for my work, as well as for entertaining the kids. It charges quickly, and the charge lasts or hours. It is fast enough to run modern apps properly, and let you stream anything you could want.