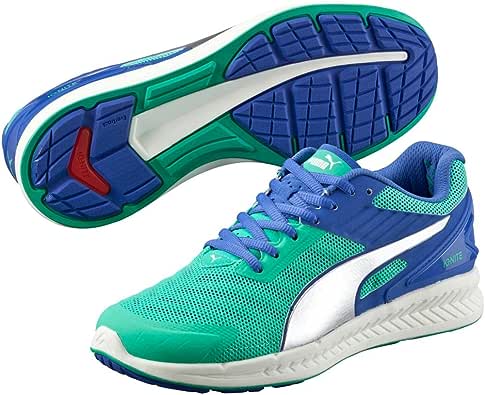 Leigh
5.0 颗星，最多 5 颗星 Finally found THE shoe I have been in search of for the last five years....
2016年9月5日 - 已在美国亚马逊上发表
已确认购买
This was probably one of the best purchases I have made. I previously wore Asics shoes and ended up switching to Puma ignites when I purchased a pair at a retail clothing store. I took a chance and so glad I did!! I like them so much that I ordered several pair a few months ago...some dedicated to run in and another just to wear.

Although I sent this particular pair back because I discovered that I like the plain Ignites better than the V2... the return process was absolutely seamless. I wore them on a five-mile run and just felt that the extra padding in the heel felt weird to me. So I contacted Puma and they told me there was a 30-day test ride in addition to free returns. Even though I bought these from Amazon, I was given the same warranty as if I would have purchased them directly from the Puma site. I returned these V2s and ordered the regular Puma Ignites and I will not switch....

I just LOVE these shoes!! I purchased 3 pairs for what I would have paid if I caught one pair of my old running shoes on sale!! I bought the coral pair because they were cheap. I thought the color was a little out there but I have received a lot of compliments on them which surprised me.

Please don't ever stop making these!! They are light, comfy, and just right for us no-frill runners and active people that just want a great pair of shoes for running, daily wear, and the gym (although I only run in my designated running pair). Love love love love LOVE!!!!!
阅读更多
3 个人发现此评论有用

Becca
5.0 颗星，最多 5 颗星 Perfect size 8 fit.
2016年8月5日 - 已在美国亚马逊上发表
已确认购买
Super comfortable. Very lightweight with plenty of cushion. I think Pumas tend to run a little narrow, but I was impressed how well these fit, especially in the toe box. I really love the sort of rubber coating around the front of the shoe. Seems most of my shoes that have the mesh overlay tend to rip there, but hopefully these won't. I had them in my cart for a few days and the price dropped to about 30 bucks! I couldn't pass that up. Thanks Amazon!
阅读更多
3 个人发现此评论有用

city mouse country mouse
3.0 颗星，最多 5 颗星 more fashion than fitness
2018年4月9日 - 已在美国亚马逊上发表
已确认购买
3.5 stars: These feel more like fashion sneakers than joggers, but they are super cute. The interior foot-bed has an odd ribbed texture that could probably be ameliorated by an insert. It's a bit distracting when you're jogging. However- I can wear these to the store post-work out and not feel like a bum. I'll probably go back to Saucony after these wear out.
阅读更多

SD
4.0 颗星，最多 5 颗星 Soft
2017年4月25日 - 已在美国亚马逊上发表
已确认购买
Comfortable but not as soft as v1 (which had a terrible foam bottom that ripped and deteriorated after a month). I have a heel bone spur and was getting shots every four months - I have not experienced any heel pain as long as I wear these shoes in house and out. I can definitely feel the pain coming back if I wear other shoes or no shoes while inside the house
阅读更多

Zhadia
2.0 颗星，最多 5 颗星 On the positive this is a good looking sneaker
2016年10月22日 - 已在美国亚马逊上发表
已确认购买
On the positive this is a good looking sneaker, on the negative the interior sole has a wave design that you can feel and it took me a few to get used to this. The negative is the front flap of the shoe slides across it does not matter how tight I tie my shoelace that pies slides over just slightly
then you end up w/the knot of your shoelace on your ankle. You may not notice but for doing Zumba and other moving activity this is bit annoying so I have to watch what days I pull them for the gym. So that I am not distracted in class pulling them into place. Not a happy camper.
阅读更多
加入亚马逊Prime，从此免运费
亚马逊Prime会员可享海外购美/英/日/德跨境免邮，全年无限次！更有免费无限次阅读电子书服务
> 立即加入
了解我们
合作信息
帮助中心和购物指南