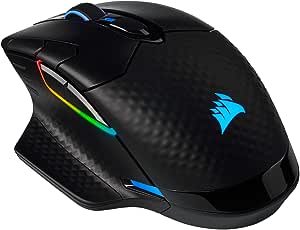 Brandon
2.0 颗星，最多 5 颗星 Seemed promising, but..
2020年4月24日 - 已在美国亚马逊上发表
样式: 标准充电已确认购买
Let me start off by saying this is my first time buying a Corsair mouse. And I had high hopes for this mouse. Liked how it looked, and it seemed to fit my needs and wants from a new mouse. And this would have been the case, minus this annoying squeak that came from both right click and the mouse wheel. Over time the right click squeak went away, but the wheel seems to have gotten worse. Can't seem to scroll up without it squeaking nonstop. I know I ordered a mouse, but this is ridiculous. Honestly considering returning it as is. This is unacceptable and not at all what I expected from a mouse that costs more than AAA game and then some.
阅读更多
29 个人发现此评论有用

Christian Cruz
2.0 颗星，最多 5 颗星 Good mouse... for about a month
2020年5月11日 - 已在美国亚马逊上发表
样式: Qi Wireless Charging已确认购买
This is only the second wireless mouse I have ever owned. The first was a Razer Ouroboros and that lasted me a good 4-5 years. The first 3 1/2 years went fine without a problem and the first thing to fail was the battery. No problem, I'll just use it wired. Awesome until the end of its life.

Now I have owned mostly wired mice from Corsair and they haven't lasted me nearly as long as my Razer Ouroboros. The last one before my current Dark Core Pro RGB SE was the M65 Pro RGB and that was fine until the scroll wheel and the right click started squeaking about a year and a half later after some mid to heavy use gaming. Before the M65 Pro RGB, I was rocking the Glaive for about 2 years and the problem was the right click also being squeaky.

I finally decided to purchase a wireless mouse once again since wireless mice have become a lot faster in polling rate and provide less input lag now, barely-even noticeable between my M65 Pro. I purchased this mouse on April 8th and it arrived April 11th. I specifically bought the SE version to also use my wireless charger that I already owned.

Here I am ONE MONTH later and these are the problems I've have with it:

-Right-click squeaking when playing something like League of Legends

-Battery drain is too fast, lasts about 2 days max of medium to heavy use

-In wireless dongle mode, I sometimes get weird stutter like a slight disconnection despite being only like 2ft. away from the dongle itself

-One night I left my mouse charging overnight on my wireless charger and not only did it not charge, it also overheated and was pretty hot to the touch. I let it cool for about an hour and just now charge it with the included USB-C cable.

Here are the good things that I like about the mouse when I initially got it:

-Very comfortable to use for long periods of time, I would say my grip is between a palm grip and fingertip grip

-Super responsive, setting the polling rate to 2000Hz and giving the mouse the 0.5ms made the mouse feel amazing

-The placement of the two buttons on the left-click is great for assigning stuff like pings or interacts in games like League, CoD:Warezone, Apex, and OW

-The included grip on the right side makes it more comfortable for me personally, I love side grips like the Ouroboros

Dave H.
3.0 颗星，最多 5 颗星 I tried to love it but ended up returning
2020年7月25日 - 已在美国亚马逊上发表
样式: Qi Wireless Charging已确认购买
I have heard a lot of good things about Corsair. I have a Corsair K70 RGB Rapidfire keyboard that I like and so I kind of wanted to convert all of my peripherals to Corsair so I could use just one software for RGB and whatnot.

This mouse just didn't do it for me. I didn't enjoy using it. I have always been a Logitech guy for mice and took a leap on the Corsair Dark Core RGB Pro SE.

The reasons I returned it:
The mouse is a little more... square than my previous Logitech mice I have used before. Everyone knows that Logitech makes very ergonomic mice. The Corsair wasn't awful but it just wasn't as comfortable. It felt a little more blocky than my liking.

I think the thing that really killed it for me and ultimate caused me to return the mouse is that the plastic on the sides are a little slicker than I would have liked. My Logitech mice have a somewhat-rubbery texture that just feels better to my grip. The Corsair, while had a texture, just wasn't as grippy I guess. It felt kind of slick and it really bugged me but that may just be because I was used to the Logitechs.

So I ended up returning it and picked up a Logitech G502 Lightspeed instead.
阅读更多
17 个人发现此评论有用

Deaveon
4.0 颗星，最多 5 颗星 Nice all-round mouse with one flaw
2020年5月8日 - 已在美国亚马逊上发表
样式: 标准充电已确认购买
This is a pretty good mouse, if you have large hands this mouse can easily accommodate and still fell extremely comfortable, and if you're someone who doesn't have issues with icue then the mouse works perfectly with the software as well good amount of options to help fit your needs and everyday use. However my only complaint is that the latency when using the USB wireless is not the best, I can go really good for 10-15 mins then have to wait 15 sec as my mouse becomes unresponsive or shoots my view to one side. Outside of this issue mouse is a dream. (Review for Crosair Dark Core RGB Pro)
阅读更多
14 个人发现此评论有用
加入亚马逊Prime，从此免运费
亚马逊Prime会员可享海外购美/英/日/德跨境免邮，全年无限次！更有免费无限次阅读电子书服务
> 立即加入
了解我们
合作信息
帮助中心和购物指南