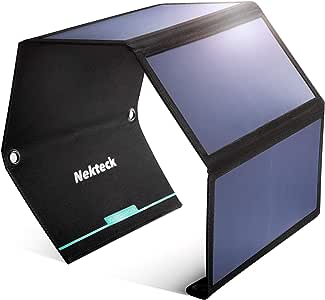 Andrea Howard
4.0 颗星，最多 5 颗星 Functional, durable, can it charge faster?
2020年7月10日 - 已在美国亚马逊上发表
已确认购买
This is my first solar charger. Overall I like the durability and functionality. I was HOPING it would charge faster.
Here's my experience:
CONDITIONS/ EXPOSURE: I was on the boat on a very sunny day. I laid it flat in full sun, and later, when we put the awning up, I used the clips to hang it in full sun from the awning. 95% of the time it was in full sun during midday. The other 5% it had a small shaded spot.
CHARGING TIME: At 1:00 my phone was 53%. At 3pm my phone was 97%. For me this seemed long. During this time my phone was almost completely unused. I took a couple screenshots to note the time.
DURABILITY: Awesome! It was on the boat floor....2 dogs in the boat occasionally walking on it and water getting dripped all over. Looks brand new.
FUNCTIONALITY: It's a little big, but also not. It fit easily in my bag because its thin when folded. The hooks are great. The zipper pocket is a nice touch for cord storage and to protect the connection a bit.

A side note, not affecting the review: why make a solar charger without a power bank?
It doesn't seem like weight/size would be effected that much for hiking, etc. If it was purse size, then I can see that being an issue.
It just seemed to take a long time to charge.

Alice Asbury
4.0 颗星，最多 5 颗星 A good solar charger for a decent price
2020年7月11日 - 已在美国亚马逊上发表
已确认购买
I bought this solar charger out of curiosity - do a few small solar panels really produce enough electricity to charge a phone? After buying and trying this item out, I can confidently say that they do!

The solar charger is made well, with a nice sturdy and rigid feel. It folds up nicely to tuck away into a bag or in a car, and without many cables in the pouch, it's surprisingly thin. Keep in mind if you put a bunch of cables in the pouch, it will add to the thickness, but it's still not thick enough to be a burden.

I should add that the charger comes with a micro USB cable, which I wish was USB C at this price point but I have plenty of USB C cables lying around. You also get two carabiners which could come in handy to attach it to a backpack or other surface using the attached mounting holes.

As I said before, the solar charger comes with an attached zip pouch that you can put your phone in while it's charging, as well as store cables and other necessary items when the charger is not in use. The pouch comes in handy for protecting your phone from the heat of the sun while you charge it, so that's a big plus. Inside the pouch is a plastic brick with two USB ports, so you can charge two items at the same time. I wouldn't recommend charging two at the same time, but I'll get to that later.

Next up, I'll give some information about how well the charger works. As I said, I was curious, if not a bit skeptical before purchasing this product. To test it out with a variety of phones, I plugged in a Samsung Galaxy S10+, an iPhone 11 Pro Max, and an iPhone 7+. While the charger does not support fast charge for Android phones, it gets the job done. When two devices were plugged in at the same time, there was a slow down in charge speeds. The slower charge rate while trying to charge multiple devices was expected, but it's nice to have the option in case you need to charge two things at once in a pinch and you're not in a hurry.

I have seen some other reviews saying that the charger slows down when it is partially covered by shade, but this only happened to me when 2 out of the 4 solar panels were covered. When just one panel was covered, I did not see a decrease in charge speeds.

All in all, I'd say this is a pretty good charger for what it is. I would like it to be a bit cheaper, but overall I'm satisfied. I'm planning to keep this charger in my car in case of emergencies and I'm sure it'll come in handy if I ever need to use it.
阅读更多

David E
5.0 颗星，最多 5 颗星 Works great! It even charges without direct sunlight!
2020年6月19日 - 已在美国亚马逊上发表
已确认购买
I opened the solar panel at my dining room table and was surprised when I noticed a green led was shining from the usb ports of the solar panel. It was being powered by the ceiling light I had turned on above the table! Pretty cool! I plugged in a power bank to see if it would charge by a ceiling light. I didn't expect it to, and it didn't; but I had to try to satisfy my curiosity. I later put the panel in the sunlight that was streaming through a window, and that did charge the power bank. Not as quickly as being outdoors, but it's convenient that it can even work when left indoors by a window (in case rain is in the forecast for instance). After using it a bit, I can say that I'm very happy to have it. It provides nice peace of mind to know that I can charge up our phones if we're away from or without power. A couple thoughts on the construction of the solar panel: I think the general construction is very good. The nylon and Velcro looks and feels durable and strong, and it has a good zipper on the pouch. No complaints!
阅读更多
2 个人发现此评论有用
加入亚马逊Prime，从此免运费
亚马逊Prime会员可享海外购美/英/日/德跨境免邮，全年无限次！更有免费无限次阅读电子书服务
> 立即加入
了解我们
合作信息
帮助中心和购物指南