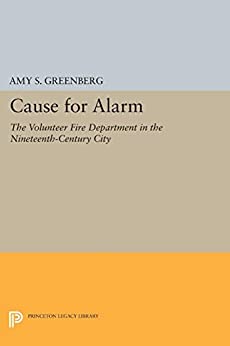 Though central to the social, political, and cultural life of the nineteenth-century city, the urban volunteer fire department has nevertheless been largely ignored by historians. Redressing this neglect, Amy Greenberg reveals the meaning of this central institution by comparing the fire departments of Baltimore, St. Louis, and San Francisco from the late eighteenth to the mid-nineteenth century. Volunteer fire companies protected highly flammable cities from fire and provided many men with friendship, brotherhood, and a way to prove their civic virtue. While other scholars have claimed that fire companies were primarily working class, Greenberg shows that they were actually mixed social groups: merchants and working men, immigrants and native-born--all found a common identity as firemen. Cause for Alarm presents a new vision of urban culture, one defined not by class but by gender. Volunteer firefighting united men in a shared masculine celebration of strength and bravery, skill and appearance. In an otherwise alienating environment, fire companies provided men from all walks of life with status, community, and an outlet for competition, which sometimes even led to elaborate brawls.

While this culture was fully respected in the early nineteenth century, changing social norms eventually demonized the firemen's vision of masculinity. Greenberg assesses the legitimacy of accusations of violence and political corruption against the firemen in each city, and places the municipalization of firefighting in the context of urban social change, new ideals of citizenship, the rapid spread of fire insurance, and new firefighting technologies.

The Princeton Legacy Library uses the latest print-on-demand technology to again make available previously out-of-print books from the distinguished backlist of Princeton University Press. These editions preserve the original texts of these important books while presenting them in durable paperback and hardcover editions. The goal of the Princeton Legacy Library is to vastly increase access to the rich scholarly heritage found in the thousands of books published by Princeton University Press since its founding in 1905.

Jason Sheldon jes5@netdoor.com
4.0 颗星，最多 5 颗星 Very high in historical value, Excellent,Pioneering research
1999年5月25日 - 已在美国亚马逊上发表
Amy S. Greenberg, Cause for Alarm. (University of Princeton Press 1998). Amy S. Greenberg is an Assistant Professor of History at Pennsylvania State University. She is tackling a largely male-dominated subject, but also one that is for the most part unexplored by historians. Her introduction is jam-packed with information. The introduction is set like that of a Greek drama, bringing the reader up to speed before the meat of the book is consumed. She does an excellent job of placing the volunteer fire fighter on a pedestal and then glorifying him as a demagogue. Later on we see the institution of volunteer firemen corrupted by several factors, and the firemen, like actors, take a great fall from grace due to their tragic flaws.
Greenberg covers several aspects of her work in the cities of Baltimore, St. Louis, and San Francisco. Social, political, and cultural aspects seem to be the main issue here. This book also marks the transition from volunteer fire companies to paid full-time departments as well as the change in the American way of thinking of how and who should fight these fires. It is demonstrated in this book how the volunteers appeared Superman-like on paper as well in the public eye.
The "power trip" some of these men experienced would contribute to their downfall. Always wanting to be the first company on scene, drinking and swearing, and other daralous behavior that the personnel engaged in helped put them out of business.
In an age with any out television, firefighting was a form of entertainment for these men. Simply put, modernization helped to rid the large cities of competitive volunteer fire companies, only to see them replaced by paid personnel. (Don't worry most firefighters of today are every bit as competitive as the ones portrayed in this book) "Firemen provided the stability and order that allowed for the growth of professionalism. And with that transformation, the volunteer fireman fell from grace." Here we see how volunteers started to be seen as a burden, rather than a help to society. Why would a shop owner want to lose his employees for several hours to fight a fire that did not endanger his livelihood? Or better yet why would he close the shop to go to the rescue of some one he had no vested interest in. These are the issues that are struggled with inside the book.
Several documents are used in this book as well as primary and secondary sources. R. N. Seiel gave a favorable review in Choice (January 1999). This book would contribute to anyone's understanding of this subject matter. Today most people would not understand the act of fighting fire and receiving no compensation for it. This book is, as advertised, a cause for alarm.