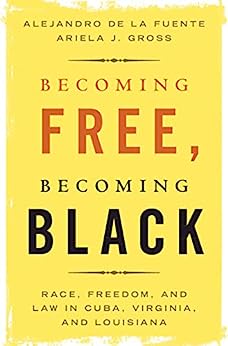 英语版本 Alejandro de la Fuente (作者), Ariela J. Gross (作者) 格式: Kindle电子书
属于：Studies in Legal History（25 本书）
|
分享
分享 <分享样章>
广告
显示所有 格式和版本 隐藏其他格式和版本
How did Africans become 'blacks' in the Americas? Becoming Free, Becoming Black tells the story of enslaved and free people of color who used the law to claim freedom and citizenship for themselves and their loved ones. Their communities challenged slaveholders' efforts to make blackness synonymous with slavery. Looking closely at three slave societies - Cuba, Virginia, and Louisiana - Alejandro de la Fuente and Ariela J. Gross demonstrate that the law of freedom - not slavery - established the meaning of blackness in law. Contests over freedom determined whether and how it was possible to move from slave to free status, and whether claims to citizenship would be tied to racial identity. Laws regulating the lives and institutions of free people of color created the boundaries between black and white, the rights reserved to white people, and the degradations imposed only on black people.
阅读更多
Previous page
Next page
由于文件较大，下载时间可能较长。
›  查看更多商品促销信息

David Keymer
5.0 颗星，最多 5 颗星 THIS IS HOW HISTORY SHOULD BE DONE (4-1/2* out of 5*)
2020年5月31日 - 已在美国亚马逊上发表
免费商品的 Vine 买家评论( 这是什么？ )
Two noted scholars of legal history - De la Fuente (prof., Latin American History and Economics, African and American Studies, Harvard) and Gross (prof., Law and History, USC Gould School of Law) mine the archives in three pre-Civil War slave societies –Cuba, Louisiana and Virginia—to address the question, when and how, in law, did Africans become “blacks” in the Americas? And how much was their increasingly restricted status the product of being slaves or of being black? Their analysis starts with the 12600s and progresses to the eve of the Civil War, in 1860. The outcome is true comparative history with equal time given to each regime and the results of the study of each compared to the others to illuminate trends and consequences. The question they ask is how did slaves go about freeing themselves from being enslaved and how successful were they in doing so. What makes it interesting is that in their heydays, the three regimes operated under different legal systems, Spanish for Cuba, French for /Louisiana and the English common law for Virginia. Also, the three territories were differently prepared to address the question of free men, with Virginia’s and Louisiana’s restriction of rights of manumission and appeal for freedom, and the rights associated with free black status, increasing as the territories grew more comfortable addressing the problems they thought they faced with the specter of freed black people in their midst. Cuba, on the other hand, with a history of law dating back to Roman times and addressing the issue of slave status, was never able to restrict the freeing of slaves or the incorporation of freedmen into their white society as successfully as did either of the two mainland colonies. In all three places, the pattern is the same, though, a ratcheting down of privileges for freed folk and a tightening of the strings on manumission or any other legal device to gain freedom. There may have been a lot of free black people in Cuba, especially in Havana, but in one of the three colonies did the dominant white community see blacks as equally privileged and in all three, especially after the Haitian uprising, followed two decades later by a wave of slave revolts and pressure from abolitionists, the trend in the nineteenth century was toward a punitive, increasingly restrictive regimen that minimized the humanity and capability of freedmen and subsumed them under the category of black and thus meant de facto inferior. The work involved in this study must have been backbreaking but the results are well with it. This is solid history that lets us see clearer just how bad, and sometimes not so bad, it was to be a black slave in colonial America and the Caribbean. This is how history should be done.
阅读更多
5 个人发现此评论有用

BeatleBangs1964
5.0 颗星，最多 5 颗星 Scholarly Work
2021年3月7日 - 已在美国亚马逊上发表
免费商品的 Vine 买家评论( 这是什么？ )
This is brilliant legal history and topics that will always need to be on the table. The slave societies that predate the Civil War in America are Cuba, Louisiana and Virginia. Terminology is also examined - African slaves were referred to as black and some less acceptable terms. I hate the word "negro" with the heat of countless suns and have all my life. My aversion for that word (which happens to be Spanish and Italian for black) increased exponentially when I learned that the racist variant, the infamous N word is a corruption of negro. How I hate that word and the slur it spawned!

The authors of this book are renowed scholars who have credentials in ethic studies as well as law and history. Their areas of expertise cover a wide swath of historical time periods. One issue that doesn't get much coverage is that in some African tribes members were enslaved. Slavery is an atrocious institution that can be traced back to Antiquity. The three slave societies featured in this book are the Spanish rule for Cuba; the French rule for Louisiana which was named for King Louis XIV of France.

Both authors expound on the question of how slaves became manumited or somehow were able to escape. Each of the three territories explored in this book discusses the adjustments each made in having free black people living among the ethnic "ruling" class. Relevant issues are also explored such as the Haitian uprising and slave revolts. Slavery in America which included but was not limited to Louisiana and Virgina has been a bone of contention for many generations. Abolitionists, escapees, Quakers and public figures all played instrumental roles in abolishing slavery. The history and research in exploring slavery in the Carribbean, Cuba and the United States is very thorough, methodical and meticulous. It is important history that should be a part of classes that cover slavery.

Kevin Fontenot
5.0 颗星，最多 5 颗星 Excellent Comparative Legal History
2021年2月1日 - 已在美国亚马逊上发表
免费商品的 Vine 买家评论( 这是什么？ )
Becoming Free, Becoming Black is an excellent academic comparative study of the legal methods by which slaves in three societies were able to gain and maintain freedom. The authors examine both the legal structures and the actual implementation of the laws regarding emancipation and manumission in Virginia, Louisiana, and Cuba. They made extensive use of legal archives and case histories. The choice of regions to investigate is interesting in that Cuba operated in the Spanish legal system (which was rather generous for emancipation, including self purchase), Virginia under the English legal system, and Louisiana which had elements of both those systems with an overlay of French codes. The result is a fine examination of the process of emancipation and freedom gaining in three different, but comparative systems. The strength of the book lies in the authors' masterful use of personal stories and cases, illustrating their arguments with humanity rather than abstract legal constructs. One immediately sees that enslaved people knew about the legal possibilities in each system and availed themselves of those whenever able. This is an academic text, but easily accessible to the lay reader, with terminology understandably defined. I recommend this book to those interested in the three regions in discussion, slavery, legal history, and black history in general.
阅读更多

LB
5.0 颗星，最多 5 颗星 Informative
2020年7月10日 - 已在美国亚马逊上发表
已确认购买
Exceptional speed and well packaged, thank you. I wished I had found this book years ago, might have saved a lot of money on all the books I purchased. This book contained informative detailed data from before slavery, during the attempts of slavery to the displacement of people of color. This one book answered the questions I was looking for, were the books I previously purchased lacked those answers. I highly recommend this book to those who are researching this subject and the speedy delivery.
阅读更多