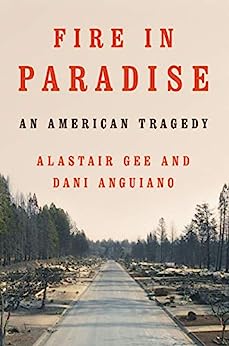 The harrowing story of the most destructive American wildfire in a century.

On November 8, 2018, the ferocious Camp Fire razed nearly every home in Paradise, California, and killed at least 85 people. Journalists Alastair Gee and Dani Anguiano reported on Paradise from the day the fire began and conducted hundreds of in-depth interviews with residents, firefighters and police, and scientific experts. Fire in Paradise is their dramatic narrative of the disaster and an unforgettable story of an American town at the forefront of the climate emergency.

Jim Reynolds
2.0 颗星，最多 5 颗星 Decent Account of a Terrible Tragedy — Skip the Second Half
2020年5月16日 - 已在美国亚马逊上发表
已确认购买
First half of the book was much better than the second part. They clearly ran out of steam when they became so politically partisan. Just give us a good account of what happened, without the politics. Not everybody is a Lefty out there. You are losing half of your audience by being so offensive to conservatives. You probably don’t even realize that you are doing that because you live in a bubble.
阅读更多
50 个人发现此评论有用

S. Peterson
5.0 颗星，最多 5 颗星 Personally difficult to read
2020年4月3日 - 已在美国亚马逊上发表
免费商品的 Vine 买家评论( 这是什么？ )
We live in Santa Rosa, CA and have survived two fires; the Tubbs fire and the Kincade Fire. The Tubbs fire came in the middle of the night for us. We were awakened by frantic neighbors. I ran out into the street in my shorts and could hear nearby explosions and see the firestorm raging in the hills above our house. The two-lane road in front of our house turned into five lane, all exiting toward the safety of the freeway. The scene was surreal as we could hear car horns in the hills coming from families desperate to escape. Our house was spared but 27 of our personal friends and coworkers lost everything. With the Kincade fire we had warning. We could see it in the hills out our front window for 2 days before the mandatory evacuation of a huge part of Sonoma County. What saved us during the second fire is that we learned our lesson from the Tubbs and Paradise fires and we left. We all left. First responders have priorities. Life before property. The Tubbs & Paradise fire they were all directing the surprise evacuation and could not fight the fire. That's why we lost thousands of homes and so many lives. Because we evacuated during the Kincade fire, first responders could fight the fire and my neighborhood, in particular. We were right between both fires and spared both time.

So when I read this book I could relate to everything. The chaos, the clogged roads, the stories of survivors in the hills, and the intensity of it all. We have friends who had firefighting equipment on their property. Had they stayed and tried to fight the fire they would have died. I went with them when they were first allowed back. The ground was still smoking in places where tree roots were glowing. Pools of melted glass and aluminum were everywhere. It was obliterated.

It gave me a mild case of PTSD to read this, to tell the truth. I was highly involved in the relief and evacuation efforts in Sonoma County as we ran an evacuation shelter. Two days after the Paradise fire a group of us went to meet with Paradise survivors sheltering in Sacramento. We were there to offer support and advice. We all gathered in a room and I started to cry because I could see in all of them the familiar "Thousand Yard Stare" and I could smell the smoke on and in them. It's not a campfire smell but a burned chemical smell. It instantly made me emotional and brought me right back to our fires.

So, back to this book. It is accurate and the author does their best to describe the events of that night. But understand there is so much deep emotion and even horror that one cannot capture in words when confronted with a monster like this. We thought the Tubbs fire was a once-in-a-lifetime event. Then came the Paradise fire, and then the Kincade. And I'm not even mentioning the fires in Redding and Southern California. This is going to be the new normal, along with earthquakes, floods, landslides and drought.

arlene key
5.0 颗星，最多 5 颗星 Masterfully woven fabric of tragedy and courage.
2020年5月10日 - 已在美国亚马逊上发表
已确认购买
I read this cover to cover on opening the package because I could not put it down. There is no sensationalism. It’s just there, real, gritty heart pounding account of events as they happened. The heroism of many. The heartbreak of the survivors. The tragedy of those who could not escape as well as those who could have but instead chose to remain and try to help others. I highly recommend this to everyone.
阅读更多
21 个人发现此评论有用

Eileen Phelps
5.0 颗星，最多 5 颗星 This could happen again, anywhere the wind blows.
2020年6月11日 - 已在美国亚马逊上发表
已确认购买
This book is a must read, absolutely. There are a number of books about historical fires that are interesting but don't serve as a warning about what can happen today. We get complacent.
I live part time in California about 70 miles from Paradise and know some of the people who have moved to Grass Valley & Nevada City temporarily. Our Alta Sierra Ranches property lost much of our back yard to a forest fire a couple of years prior and our house was saved only by the wind changing direction and taking two nearby houses instead.
We had four minutes to evacuate and no warning because the fire began about 200 yards down the road and the flames were fifteen feet high by the time they reached us. My son just looked out the window and discovered it. People who do not live in places like this can have no idea what wind can do with a spark and how fast it can do it.
As we fled, a plane was already spreading retardant and a fire truck came up our driveway two minutes later. It stayed there for about five days, putting out hot spots. I can not thank them enough.
阅读更多
17 个人发现此评论有用

Ron Vincent
5.0 颗星，最多 5 颗星 Vivid, visceral descriptions of the Paradise fire
2020年5月27日 - 已在美国亚马逊上发表
已确认购买
The California foothill and mountain communities are often achingly beautiful with serene forests, carpets of leaves and undergrowth, and a sense of splendid isolation. You also have narrow roads with towering trees, limited escape routes, and the ever present risk of wind driven infernos that can turn a neighborhood into a jumble of ashes. This book captures the sudden terror of the Paradise fire with the crisply written prose you would expect from the Guardian’s journalists. I found myself astonished that so many survived this blowtorch of a fire and as a fellow Northern Californian share the sorrow for those who did not. This is a book I will share with friends.
阅读更多
14 个人发现此评论有用