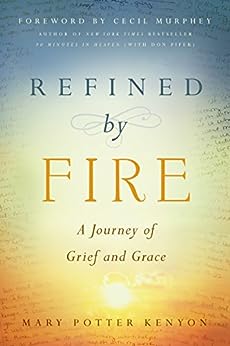 Refined by Fire: A Journey of Grief and Grace (English Edition) Kindle电子书

“Where is the handbook for widows?” Mary Kenyon lamented as she planned a funeral for the beloved husband whose triumph over cancer she chronicled in Chemo-Therapist: How Cancer Cured a Marriage. During the ensuing weeks, as she attempted to make sense of his untimely death, she filled two journals, blogged, and read the inspirational writings of others who had gone down the road of grief before her—authors like C.S. Lewis and Madeleine L’Engle. She eventually found herself studying grief and bereavement in her quest to unearth answers to alleviating the pain associated with profound loss. In the process, she discovered a strength and emotional reserve she didn’t know she had, along with an evolving faith that helped her face the impending loss of an eight-year-old grandson.

“In the midst of the darkness of loss, I found light. Admittedly, in those first weeks, it might have been but a single small spark I sensed deep inside of me, but that spark guided me in the twisted, dark journey of grief. As I stumbled over the roots of hopelessness and despair, that light grew to illuminate my path, a path I sometimes felt very alone on. At some point in the journey I’d turned around, and there was God.

When we experience grief, what we long for most is the hand of someone who knows the depth of our pain. "Refined by Fire" is a friend's hand as you travel your journey of loss. It is the gentle, compassionate voice of someone who's walked in your shoes and who knows the rocks beneath your feet. Mary Kenyon brings practical experience clothed in gentle grace, unflinching truth, and unwavering hope. I recommend this book to pastors, therapists, and anyone who has lost a loved one. Shelly Beach Award-winning author of 10 books, including "Precious Lord, Take My Hand" Managing editor, "Hope in the Mourning Bible" (Zondervan 2013) Co-founder of PTSDPerspectives.org Caring.com expert ShellyBeachOnline.org/PTSDPerspectives.com"

When we experience grief, what we long for most is the hand of someone who knows the depth of our pain. "Refined by Fire" is a friend's hand as you travel your journey of loss. It is the gentle, compassionate voice of someone who's walked in your shoes and who knows the rocks beneath your feet. Mary Kenyon brings practical experience clothed in gentle grace, unflinching truth, and unwavering hope. I recommend this book to pastors, therapists, and anyone who has lost a loved one.

"Mary Kenyon's "Refined by Fire" reminds me of my grandmother, Madeleine L'Engle, who taught so many of us that writing can be a form of prayer that leads us to grace. I was moved to read how her influence inspired Mary to write and heal as well. Mary's writing style is extremely accessible, and her voice raw, authentic and brave. By the end I was crying with her. I would definitely recommend her book to anyone who is going through any type of loss."

"Not long into the writers' workshop I was teaching on a Midwestern college campus, a woman in the front row of desks began to weep. I didn't know why at the time. But I sensed I was witness to something holy happening in that room. The book you hold in your hands is a result of that holy moment when the God of heaven gave the author permission to write out of the midst of her pain to provide a holding-on place for others in theirs. Mary Potter Kenyon's breathtakingly real thoughts reveal that razor edge where despair dances with hope and the ugly becomes elegant. I'm already creating a list of those laid on my heart to receive the gift of the story of Mary's grief journey."

Cynthia Ruchti, author of "Ragged Hope: Surviving the Fallout of Other People's Choices""

Mary Potter Kenyon graduated from the University of Northern Iowa with a BA in Psychology and is the director of the Winthrop Public Library. She is widely published in magazines, newspapers, and anthologies. Her essay on the connection between grief and creativity was published in the January/February 2013 issue of Poets & Writers magazine and she wrote several of the devotions included in the NIV Hope in the Mourning Bible released by Zondervan in 2013. Mary writes a weekly couponing column for the Dubuque Telegraph Herald and conducts writing and couponing workshops for women's groups, libraries, and community colleges. Mary's public speaking repertoire includes the topics of couponing, writing, utilizing your talents in your everyday life, and finding hope and healing in grief. This is Mary's third book published by Familius. Coupon Crazy: The Science, the Savings, and the Stories Behind America's Extreme Obsession was published in 2013, and Chemo-Therapist: How Cancer Cured a Marriage was released in April 2014. Mary lives in Manchester, Iowa, with three of her eight children.

Jimmie Aaron Kepler, EdD
5.0 颗星，最多 5 颗星 She Walks The Journey as Your Guide
2020年9月1日 - 已在美国亚马逊上发表
已确认购买
I bought and read the Kindle Edition of Refined by Fire: A Journey of Grief and Grace by Mary Potter Kenyon. Having my mother pass away in December 2014, my father dies in June 2017, and cancer takes my wife of 43.5 years in April 2018, I have experienced grief and still am. The author has walked the grief highway and shares not only her experience and insights but helps the reader be aware of what they may encounter on the journey. One area I could relate to was my concern for how my children were handling grief and I felt the need to take their feeling into consideration when I made choices I knew would impact my family. Starting new traditions for Thanksgiving and Christmas was a struggle for me. I had my middle child, then 38, graduate from seminary earning a master’s degree just three weeks after my wife’s death. One of my wife’s goals had been to live to see him walk across the stage. Five weeks before the graduation while she was in hospice she said she wouldn’t make it and my heart broke realizing death was imminent. I drove across the country in May 2020 to attend a writer’s conference. During the drive I started talking, forgetting my wife was deceased. I drove past a Cracker Barrel Restaurant between Birmingham and Huntsville Alabama I said we had stopped there to eat on several previous trips to see her sister that lives in eastern Tennessee. I had to pull over and cry for about fifteen minutes. Mary sharing similar events in her book had me realizing my experience was normal for me and needed Kleenex to get through the book which I found hard to read - not because of the writing, but because of the memories reading caused me to relive. I recommend the book. Read in August 2020.
阅读更多
1 个人发现此评论有用

avid reader
5.0 颗星，最多 5 颗星 Dealing with Grief
2018年4月18日 - 已在美国亚马逊上发表
已确认购买
I read the Chemo-Therapist first, a story of the journey of Mary Potter Kenyon and her husband Dave after he was diagnosed with cancer and how this horrible disease ultimately brought them closer together. This book, Refined by Fire, is a continuation of Mary's journey, this time alone, as she deals with the aftermath of losing her husband, not to the cancer, but to a sudden heart attack, plus losing her young grandson to cancer a short time later. Mary writes, with a poetic grace, a story of raw grief, a story of healing, which provides encouragement for anyone trying to cope after a loss.
阅读更多
1 个人发现此评论有用

Dianna Vagianos Armentrout
5.0 颗星，最多 5 颗星 Highly Recommended -- Not Just for Widows but for Mourning Children and Parents
2015年2月17日 - 已在美国亚马逊上发表
已确认购买
As a mother whose one-hour old daughter died a few months ago, with other losses I can attest to the benefit of reading Potter Kenyon's book. After reading several grief books which left me unsatisfied, I will be recommending this book to my therapist and friends who work in health care. I am impressed with the writer's honest and rawness. She writes about being a widow, but also discusses losing her mother and her beloved eight-year-old grandson to cancer. Her reflections on grief are spot on, but also she is researching grief and shares what she finds in writings by L'Engle, C.S. Lewis and others. As a writer I appreciate her skill and authenticity.
阅读更多
1 个人发现此评论有用

Linda DeMaio
5.0 颗星，最多 5 颗星 A Wonderful Read
2021年1月31日 - 已在美国亚马逊上发表
已确认购买
Mary Potter Kenyon is quickly becoming a favorite of mine. This book is written with such care and concern. She must be very well versed on the subject, yet the book is relatable and easily read. As much as I enjoyed it, I will pass it on to a friend. Not fair to keep it to myself! Thank you, Mary!
阅读更多
1 个人发现此评论有用

J. Kramer
5.0 颗星，最多 5 颗星 Uplifting book written by an expert in dealing with loss
2015年8月15日 - 已在美国亚马逊上发表
已确认购买
I read this book in one sitting, staying up way past my usual bedtime. Mary shares the grief she experienced after losing three family members in a short period of time. First her mother, then her husband, and after that a grandson. Even though I am related to the author, and the people she lost, I had seen only glimpses previously of how these losses changed her life. Mary has the ability to speak to her readers in a way which touches the spirit; her works aren't only informative but they soothe the soul.
阅读更多
2 个人发现此评论有用