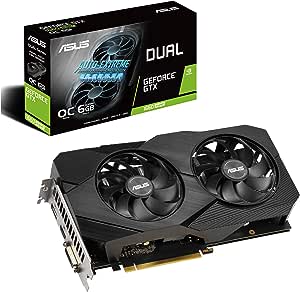 The ASUS Dual GeForce GTX 1660 EVO sets you up with a serious advantage for high definition AAA gaming. Marathon gaming session? Multi-hour raid? With Axial-tech fans and Auto-Extreme technology, the Dual 1660 EVO will keep pumping out frames long after competitors have bitten the dust. If you're looking for a solid, reliable gaming experience, this is it.

Auto-Extreme Technology is an automated manufacturing process that sets new standards in the industry by allowing all soldering to be completed in a single pass. This reduces thermal strain on components and avoids the use of harsh cleaning chemicals, resulting in less environmental impact, lower manufacturing power consumption, and a more reliable product overall.

The ASUS GPU Tweak II utility takes graphics card tuning to the next level. It allows you to tweak critical parameters including GPU core clocks, memory frequency, and voltage settings, with the option to monitor everything in real-time through a customizable on-screen display. Advanced fan control is also included along with many more features to help you get the most out of your graphics card.

Russ
5.0 颗星，最多 5 颗星 Graphics are absolutely mind blowing
2019年12月26日 - 已在美国亚马逊上发表
样式: Dual GTX 1660 SUPER OC已确认购买
So I upgraded this from a GTX 1050 to this 1660 Super and the graphics are so amazing! Even new games like Star Wars Jedi - Fallen Order run with high detail. Some games like the new Halo Reach even run on 1440p. I'm using an Intel Core i5-7500 with only a 430w power supply on a gigabyte GA-H110M-A Micro ATX motherboard. Just thought those specs might be useful to somebody!
阅读更多
88 个人发现此评论有用

James Glynn
4.0 颗星，最多 5 颗星 Almost a 3 slot card
2019年11月10日 - 已在美国亚马逊上发表
样式: Dual GTX 1660 SUPER OC已确认购买
While it does state that there's a 2.7 form factor, I should have checked. I wanted to add this to a microATX board, and there's simply no room. This card is as tall as they come. I'll keep it for a full ATX build, but I doubt it would work in a dual card format. Check your dim's before you order.

EDIT: My (limited) review is for the very thick Asus GeForce GTX 1660 Super Overclocked 6GB GDDR6, a card only released in late October 2019. Most of these reviews are for a GTX 1060 with 6GB GDDR5, from February 2017. Sloppy error.

lolzalot2142
5.0 颗星，最多 5 颗星 1660SuperOC Great card. Practically a 1660TI
2020年1月7日 - 已在美国亚马逊上发表
样式: Dual GTX 1660 SUPER OC已确认购买
I love this card. I did a massive amount of reasearch before I bought this card, and I continuously noticed one thing... It's practically the 1660ti's slightly smaller brother who believes in juicing to get swole built results.
It's lightly overclocked from ASUS... It also has GDDR6 (same as the ti) vs the GDDR5 the entry 1660 series has, which is where the value of this card really is... Makes a big difference.

I've thrown battlefield 1, 4, 5, battlefront 2, destiny 2, World of Warships, RB6 Siege, and GTAV At it.. No issues, all played at ultra settings using the global max settings.

My friend has the 1660TI, and our frames literally are always no different than 2 to 3 fps off from each other when playing games.

My only complaint, is the led set in the card is not controllable by Asus Aura. This is A little irking... Asus Mobo, Asus Mfg'd graphics card.... You would think Aura would just link right up. Nope.
阅读更多

5.0 颗星，最多 5 颗星 1660SuperOC Great card. Practically a 1660TI
2020年1月7日 在美国审核
I love this card. I did a massive amount of reasearch before I bought this card, and I continuously noticed one thing... It's practically the 1660ti's slightly smaller brother who believes in juicing to get swole built results.
It's lightly overclocked from ASUS... It also has GDDR6 (same as the ti) vs the GDDR5 the entry 1660 series has, which is where the value of this card really is... Makes a big difference.

I've thrown battlefield 1, 4, 5, battlefront 2, destiny 2, World of Warships, RB6 Siege, and GTAV At it.. No issues, all played at ultra settings using the global max settings.

My friend has the 1660TI, and our frames literally are always no different than 2 to 3 fps off from each other when playing games.

My only complaint, is the led set in the card is not controllable by Asus Aura. This is A little irking... Asus Mobo, Asus Mfg'd graphics card.... You would think Aura would just link right up. Nope.

CymTyr
5.0 颗星，最多 5 颗星 Beautiful bang for your buck card, with one minor flaw
2017年2月17日 - 已在美国亚马逊上发表
已确认购买
I waited a long time to post this review. I wanted to be sure that the performance was there, how the card handles in modern environments, etc.

This version of the GTX 1060 comes with 6gb of GDDR5 VRAM and a heavily boosted clock speed. Its only knock is the 192 bit bus instead of 256 bit, but the overall specs of this card more than make up for the bus architecture limitations.

My card does rattle sometimes where the HDMI cables are connected, and I'm not sure if it's my particular card, or the card model, or what. I did a search for that problem, and didn't find anything other than complaints about coil whine, which my card does not have. Adjusting the HDMI cables fixes the high pitched rattle (it sounds like coil whine but it's not, sometimes it rattles when I move the case a certain way when cleaning my desk) so it's no big deal.

With up to date drivers, I can max games like The Witcher 3 and Doom with this card and an AMD FX-8320 stock clocked. This game has no issues playing anything I throw at it, but games like Forza Horizon 3 I have not tried maxing, in particular Forza because it's a next gen game, and because I've read horror stories of how it performs when you try to set it too high. Saying that, Forza defaults to all near max settings, and looks absolutely stunning for me. Gears of War 4 looks beautiful. FarCry Primal can be played at near max settings.

Unless you've got the money and the willpower to get a top of the line 1080, or a really really good 1070 on sale, the 1060 is so much bang for your buck, it's unreal. Keep in mind that the best performance gains you'll see will be on modern systems. If you're still using Windows 7 or 8/8.1, you won't see as much of a difference as you will on a Win 10 system, but you WILL still see a performance increase.

Something to think about is that this card is more powerful than the R9 380 it replaced, and uses >maybe< half the power. I went from 2 6-pin connectors on the 380 to 1 6-pin on the 1060. Overall, my cpu runs cooler with the Nvidia 1060 as well, though I suspect that's because the PSU is less taxed (it's just a generic 600w) and not so much from any computations the GPU does.

I hope this article helps. 4/5 stars because of the random whining the card makes, otherwise it's a BEAUTIFUL solid card. Before I forget, its max safe operating temp is 95 degrees Celsius. The highest I've ever seen it get is 81 and that was on Witcher 3 with hairworks enabled and everything maxed.

Good luck and Have Fun!

EDIT 5/14/17: After some more extended use of the card, many testings, a new power supply, etc, I have decided to bump this card up to 5 stars. The whining went away after I replaced one of the HDMI cables with a shorter one. Apparently the weight of the old hdmi cable was weighing on the card and making it uncomfortable... lol. Anyway, as of today, with a stock speed FX 8320, 16gb 1866 DDR3 RAM, and this card, Prey (2017) runs maxed for me at a smooth 60 fps. I know Prey isn't a top taxing game, but still, it is brand new, which shows this card is still very much relevant. Also, since upgrading to a new PSU (power supply) when playing The Witcher 3, the card now only goes up to around 75-76 degrees Celsius max where before it would go up to 78-81 degrees Celsius. Either way there's plenty of headroom as the max safe operating temp is 95 degrees Celsius, but still, I don't like my electronics roasting. If you're looking for a comparable AMD card, the closest offering they have would be the RX 480/580. Honestly, I would still use AMD, but I'm tired of them constantly recycling and rebranding tech. I'm hoping when I'm ready to upgrade this card in 3-5 years, AMD will have advanced to catch up with Nvidia. We'll see.
阅读更多
142 个人发现此评论有用

NoWingedAngel
5.0 颗星，最多 5 颗星 Great Upgrade At A Reasonable Price - 2 HDMI Ports!
2017年10月10日 - 已在美国亚马逊上发表
已确认购买
Over the years, my ol' trusty EVGA GTX 560 has been through many hours of gameplay, however, it was time for an upgrade. I'm a gamer, but not the type of gamer that dedicates his life to games. I'm not a streamer, just your casual gamer who likes to play a couple hours every other day. Planetside 2, Just Survive, and a few others really. A lot of newer games came out that I really wanted to play, but needed an update (PUBG) .. so after months of deliberation, I made my purchase.

To be honest, I'm not very knowledgeable on video cards and didn't know what I was looking for. My last one was an EVGA, so, maybe I'd get another one of those.. right? Doing my research, I settled on the EVGA GTX 1050ti or the 1060 6gb. They both looked great, however, what led me to the ASUS GTX 1060 6gb is the dual HDMI ports. The specs compared strongly with the ECGA 1060 6gb and knew it was time to pull the trigger on the higher end card over the 1050ti. All my friends kept pushing me to get a 1080 or a 1080ti.. but the prices are just insane. As I said, I'm a casual gamer, not someone who was looking to drop $800 on a card!

I got it in and installed it in about 10 minutes (remember to take the protective cover off the PCI chip at the bottom.. duh!) and the driver installed automatically and I was up and running. My computer is quieter than before with my older card and Just Survive and other games run incredible. Really happy and love the dual HDMI ports!
阅读更多
33 个人发现此评论有用
加入亚马逊Prime，从此免运费
亚马逊Prime会员可享海外购美/英/日/德跨境免邮，全年无限次！更有免费无限次阅读电子书服务
> 立即加入
了解我们
合作信息
帮助中心和购物指南