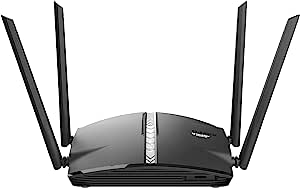 I still have three older, super-reliable, D-link routers active throughout my house as APs.

This thing however. Wow. Ive never seen anything like it. It was chaotic at best. I HAD to have gotten a dud since there's no way the company would survive if all the products were like this.

Problem #1 - The setup. Ive setup 100s of routers in my day. I know all about IPs, SSIDs, channels, wired vs wireless, DNS, WiFi vs mobile data, etc. This thing was the most chaotic setup ever - by a large margin! At least 3 times it would start refusing to connect and would want to start all over again. 4th time was the charm - even though I did nothing different on my phone (Note9)

Updated to the latest 1.04 firmware.

Even though it was setup for DHCP on the "Internet" side, the wireless devices had no connectivity until I rebooted the router twice - making no changes.

Made sure the wireless channels were manually set to open channels per my site survey.

Everyone started complaining that certain URLs would not load (on their wired machines) - even though I was using the same DNS servers as I was in the router it replaced. Hrmm.

20 mins in to it, and the wired connections all dropped. Hrmm. Rebooted. Worked for 30 mins or so....rebooted...

Started noticing some of the wireless devices dropping off frequently even though they werent moving (ex smart switches and appliances). Up and down like a seesaw but different. Some close to the router others 30-40 feet away.

Ignoring that, I even checked to see just how much better the signal strength was with this new router. Ummm. Standing 10 feet from THIS router showed a signal 20+ dbm lower (2.4 and 5Ghz) than the old DIR-628 that was 50 feet away and upstairs on the other side of the house! Checked to make sure there werent any "transmit power" options set to low and noticed that my 40+ active devices were now down to 21. No, they werent asleep.

Use the app to reboot the router and when it came back up, it was starting the initial setup process again!

Reset it and put it back in the box to be returned. Sorry, D-Link, but way too many issues to even bother contacting you about it.

In it's defense, it didnt catch fire in the 6 hours of operation. So there's that on the + side.

I'm hoping this was just a fluke/lemon and not some epic QA failure. My other D-Link's are reliable tanks!

B. Miller
1.0 颗星，最多 5 颗星 Mesh DOES NOT work
2020年1月21日 - 已在美国亚马逊上发表
已确认购买
I bought two of these "DIR-3060", and tried to set up a mesh network using a gigabit ethernet backhaul line. The quick start guide and manual have no instructions on how to properly set them up as a mesh, only as a standalone router. After 45 minutes on the phone with tech support, it was also clear that they have no idea how to mesh network them together. They claim it is possible but had no idea how to do it. They were just telling me the usual basic stuff, restart the device etc...

This is disappointing, as this is marketed as a "mesh router". I have a large house, so mesh is required for me.

Will be returning both. Improve your software and documentation, D-Link!
阅读更多
28 个人发现此评论有用

jorgy
1.0 颗星，最多 5 颗星 Plan to spend a better part of a couple days to get this working
2019年7月18日 - 已在美国亚马逊上发表
已确认购买
This router is a nightmare to setup and get working. After a day of it, I am still struggling.
D-Link tech support was somewhat helpful, but blamed all problems on the McAfee server which they have no control over.
One has to identify all devices connected to the router with very sketching information. Good luck it ain't easy. I still have some that I have no idea and some don't even show up in the list even though they are connected. How do you convert an IP address to an IOT?
The 2 year subscription for the McAfee virus software is also very difficult to implement. It seems you don't really have a single product serial number, it changes with every device and there is no way to link it to a McAfee account. Good luck getting them to help you.
Lastly the range of the Wi-Fi is pathetic. Doesn't reach a couple of my rooms in the house.
This was a good product idea that was launched before anyone tested it to see if it would be something easy to implement. Get the Bbitdefender device, my friend installed it with no issues.
阅读更多
16 个人发现此评论有用

Kindle Customer
1.0 颗星，最多 5 颗星 D-linkDIR-3060 mesh wifi
2020年2月9日 - 已在美国亚马逊上发表
已确认购买
I have used D-Lin products for over 13 years. This new mesh router worked great from 31 Dec 2019 until May 23, 2020! It stopped working! After four hours on the phone with D-Link techs, they determined that it had failed and authorized an RMA for replacement. It cost me $23.00 to return it to them. The replacement under warranty would have taken at least 7 days. We have a home based business so that was unsatisfactory! Because I wanted the replacement faster, I had to pay $229 up front for the replacement and $44.00 two-day shipping for the replacement. The replacement didn't work, either after several more hours with their techs. I'm trying to get them to refund the original cost but neither Amazon nor D-Link is being very helpful! I am going to get a router from my ISP, instead who has technicians in my community if I need help!
阅读更多
7 个人发现此评论有用

OleBill
2.0 颗星，最多 5 颗星 Complex
2020年7月14日 - 已在美国亚马逊上发表
已确认购买
I am returning this product because it is too complicated for me and COVID-19 prevents our getting Geek service on site. The router works fine for ethernet connections, but setting up our own WIFI name and password just does not succeed at being found by iPhone, iPad, nor our EPSON ET-2750 printer. When checking for WIFI networks on our WINDOWS 10, we only see this "NETWORK 2" and that is a D-LINK private network which is not recognized as a WIFI by the EPSON printer (no known password). Lastly, this D-Link AC1900 contains no usable hardcopy to install as we are forced to use QR codes and possibly accept McAfee security (not interested ). We borrowed the D-Link 1700 from our son previously and it worked fine, but our home needs a stronger WIFI.
阅读更多
6 个人发现此评论有用
加入亚马逊Prime，从此免运费
亚马逊Prime会员可享海外购美/英/日/德跨境免邮，全年无限次！更有免费无限次阅读电子书服务
> 立即加入
了解我们
合作信息
帮助中心和购物指南