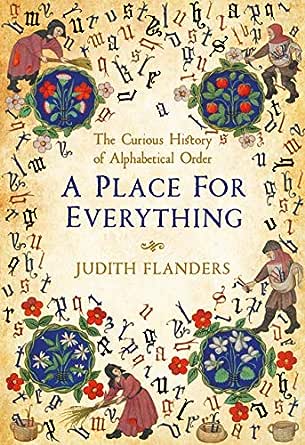 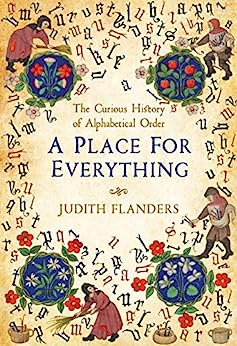 A Place For Everything: The Curious History of Alphabetical Order (English Edition) Kindle电子书

Nina L. Mazzo
5.0 颗星，最多 5 颗星 Don't take the alphabet for granted...
2020年12月17日 - 已在美国亚马逊上发表
已确认购买
The author points out that the alphabet is the means not the end. We take for granted our system of sorting and filing and finding just about everything by using the alphabet. I approached this book out of curiosity but discovered so many interesting and fascinating tidbits. You need not be an academic to enjoy this book simply someone who is curious about learning something new each day.
阅读更多
1 个人发现此评论有用

takingadayoff
4.0 颗星，最多 5 颗星 File Under "F" for Fascinating
2020年10月26日 - 已在美国亚马逊上发表
I have to admit that I never even considered why we order so many things alphabetically, what people did before that, and what people who don't have an alphabet like ours do to put things in order. Judith Flanders answers all these questions, and that is interesting enough, but she also goes off on side trips now and then that are also fascinating. I enjoyed learning that Danish soldiers in the 19th century were categorized according to literacy and there were six levels involving ability write and to read writing or printing. Which makes you think, just what does it mean to be literate? There is also some discussion about Dewey and his decimal system and other forms of organizing and their pluses and minuses. Sometimes the subject at hand was not as interesting to me, but I just skimmed ahead and it was never long before some other intriguing topic came up. The footnotes are a treat and the bibliography is a wealth of leads for further reading. I want to look up a few of the books about the early days of the telephone and operators and telephone numbers. (Thanks to Basic Books and NetGalley for a digital review copy.)
阅读更多
7 个人发现此评论有用

Madrugada Mistral
5.0 颗星，最多 5 颗星 A fabulous book for organization fanatics
2020年12月16日 - 已在美国亚马逊上发表
If you're like me, and you love to classify and organize -- I once wrote a high school biology paper on taxonomy just for fun -- you will devour this book. This author is a woman after my own heart!
阅读更多
2 个人发现此评论有用
加入亚马逊Prime，从此免运费
亚马逊Prime会员可享海外购美/英/日/德跨境免邮，全年无限次！更有免费无限次阅读电子书服务
> 立即加入
了解我们
合作信息
帮助中心和购物指南