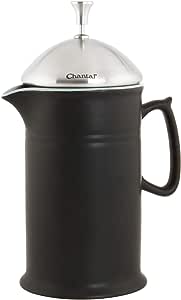 domestic goddess
4.0 颗星，最多 5 颗星 I was worried about lead glaze
2019年5月24日 - 已在美国亚马逊上发表
已确认购买
I was worried about lead in the glaze. After buying I became concerned after reading reviews. I contacted the company but did not get an answer to my question. I ordered a lead testing kit to test myself and was happy to learn that my blue glaze did not react. I really love this and I am very happy with it. I thought it was unfortunate though that I did not hear from Chantal.
阅读更多

A. G. Gonzalez
3.0 颗星，最多 5 颗星 Good Enough
2019年6月19日 - 已在美国亚马逊上发表
已确认购买
I purchased this French press to use with loose leaf tea because it's all ceramic and SS parts, no plastic. It's very pretty in person and feels well made. Unlike the other reviews, the lid is actually too snug because I have a hard time getting it off when going to rinse it out. The strainer is also quite snug. This is great because I get a clean cup of tea! It's just that it's a struggle to get the entire strainer-plunger-top out and off the pitcher though.
The other issue that I've experienced is that when pouring out the tea into a cup, it only pours out half of the tea. I have to shake the pitcher, while holding it over the cup as if pouring, to get the remaining tea out into my cup. As you can imagine, a lot of the tea ends up on my counter because it sprays everywhere. I must say that the first time I used it, the tea poured out completely and I didn't have to shake it, but it's never been a decent pour since then. I need to figure out if it's me doing something wrong at the moment of pressing the plunger or of it's just a flawed design.
As for holding the temperature, I steep my tea between 10-15 and at the moment of drinking, it's the perfect temp.
If it weren't a struggle to get the top off and the pour didn't require shaking, I'd give it 4-5 stars. Otherwise, it's good enough for now, so 3 stars.

AFM
4.0 颗星，最多 5 颗星 Pretty and usable
2020年5月15日 - 已在美国亚马逊上发表
已确认购买
This press is a very nice size and looks super pretty in person. The original picture on the website made it look much lighter than it turned out to be, but it looks corrected now. The item looks and feels high quality. The only thing I dislike about it is that the press doesn't seem to come off the stem for easier cleaning. I have tried to warm up the press with hot water for a few minutes before doing my coffee to see how much longer it would keep it warm. It does seem to work a bit, but not really long enough for me to do it very often.
阅读更多

Susan
4.0 颗星，最多 5 颗星 Makes great coffee..... but
2019年11月28日 - 已在美国亚马逊上发表
已确认购买
I received the 28 oz Chantal ceramic French Press today. Have been using the 16 oz, but I only get two cups out of it. So I was looking forward to getting the larger one. It arrived today, and when I unpacked it I found a small dent in the stainless steel (plunger) lid. If this item was intended for gifting, I would definitely return it for replacement. Still deciding if I want to go through the hassle just for the sake of perfection.
阅读更多