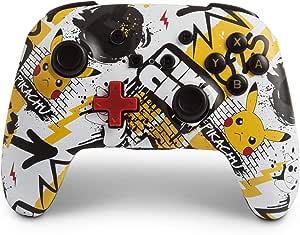 This PowerA Controller is officially licensed for Nintendo Switch. Always look for this seal when buying video game accessories as assurance that the product has gone through Nintendo’s rigorous testing and evaluation process. Products that do not carry this seal may not work at all with your Nintendo system or may have compatibility issues with certain games.

Gaming is better together

Choose from your favourite characters

Nintendo Switch allows up to 8 controller connections in docked mode, or you can link up to 8 systems together to play in tabletop mode. Compared to Joy-Con controllers, Enhanced Wireless Controllers offer improved accuracy and comfort plus larger buttons. Now that you have a more affordable wireless option available in a variety of colours and designs, pick up one or more, gather your friends and share the fun.

At PowerA, our controllers are designed by passionate gamers. Our team has over two decades of experience in the gaming industry designing across all platforms. You’ll be amazed at the features and quality built into this controller.

PowerA wireless controllers free you from being tethered to the console and provide a tangle-free gaming experience. Our design is built for comfort during extended gaming sessions using high-quality materials. Enjoy up to 30 hours of gameplay with new alkaline batteries or add your own rechargeable batteries (other variables affect playing time).

Gain a competitive advantage in your favourite game by mapping additional actions to 2 buttons on the back of the controller. No app or dashboard interaction required. Simply hold the program button for 2 seconds (1) followed by the button you wish to map (2), then select either AGR or AGL (3) to complete the process for quick on-the-fly button mapping.

STRACK®
1.0 颗星，最多 5 颗星 DISSATISFIED!!
2018年11月2日 - 已在美国亚马逊上发表
已确认购买
This controller is pretty legit. I pre-ordered it and I'm very happy with it. Every button works and feels good. The controller is very light so it feels cheap but it works without a doubt. Id give it 5 stars but I'm hesitant due to the fact that ALL switch controllers including the joycons are know for ghosting anolog sticks and my PowerA wired controller is showing signs of ghosting. I'm hoping this controller has upgraded sticks but we will see. If there is no ghosting then this controller WAAAAAY better than Nintendo's Pro Controller
UPDATE: I've been heavily gaming with this controller and it's held up so far. No ghosting in the sticks, and the buttons have no sign of wear. Definitely worth the money!

**UPDATE** MAY 2019
-My controller just died after 7 months of use. I didn't even get a full year out of it. Just shut off and never turned back on even with a fresh set of batteries. Smh...

Loren
3.0 颗星，最多 5 颗星 Very Cheap
2020年3月15日 - 已在美国亚马逊上发表
已确认购买
For the price, it’s a very cheap product. You can’t charge it and the plastic is cheap. I’m very disappointed in this because I was very excited to finally get an animal crossing themed controller. For the same price on my ps4 I can get a really nice controller. I guess I’ll keep it though because my lizard likes to sit on it
阅读更多

CWat
2.0 颗星，最多 5 颗星 Lasts about TWO MONTHS
2019年4月21日 - 已在美国亚马逊上发表
已确认购买
I'm a 15 year old that plays way too many video games. Got this controller about three months ago for the advanced gaming buttons on the back, which actually work quite well, are very easy to program, but are awkward to reach and press. For the first month I was rather in denial, the controller feels extremely cheap, very very low quality plastic, only about a month in I found myself wishing I just forked over the extra 20 bucks for the real deal. I decided to keep going with it because the buttons on the back were very handy, but I was just constantly disappointed. The buttons click super loud and are obnoxious to deal with, the weight is not balanced whatsoever, making it feel very uncomfortable, the joysticks feel unresponsive, and the product as a whole feels clunky and awkward.
Anyways, ignoring these slight disadvantages, the controller lasted me about two months, now it is very unresponsive, with the buttons and joystick inputs barely working, the joysticks have gotten extremely loose and are starting to drift my character in a way I did not input.
Overall, very disappointed. You can tell that PowerA was out to save every last penny with these controllers. The only good thing about this controller is the buttons on the back which are actually not realistically usable because of their troublesome position. Everything else about it looks cheap, feels cheap, and is not durable whatsoever.
Just put in the extra 20$
阅读更多
116 个人发现此评论有用

Luke
4.0 颗星，最多 5 颗星 Very good alternative to Pro Controller
2018年11月26日 - 已在美国亚马逊上发表
已确认购买
I was a bit skeptical that such a cool looking controller would be decent but I was pleasantly surprised (I bough the Mario version). I tried it on Mega Man 11 and Street Fighter just to see the responsiveness and it passed with flying colors. The extra buttons seem well placed and easy to use but I haven't tried them out yet. Seems like you could hit them by accident but again, I haven't actually set them up. Controller is easy to set up BTW. Just one button needed to sync unlike some other controllers.

So why four stars? Well it is AA battery powered, so not rechargeable. Not a huge deal and I kind of like being able to just add batteries instead of waiting for it to charge. But it is an extra expense you have to deal with. Batteries lasted pretty good so far. I ahve about 8 hours of play on it and it still works fine. Also, a point off for no rumble function. Not a huge deal for me but worth mentioning. And finally, it's not red all over. Would have been really cool but it's still decent looking with the black back panel. Overall, very nice controller and I will prob order the zelda one soon.
阅读更多
83 个人发现此评论有用
加入亚马逊Prime，从此免运费
亚马逊Prime会员可享海外购美/英/日/德跨境免邮，全年无限次！更有免费无限次阅读电子书服务
> 立即加入