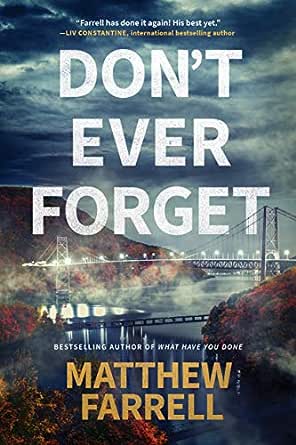 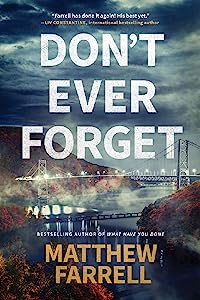 Cid Herman
1.0 颗星，最多 5 颗星 This book is just terrible. I urge you to pick something different.
2020年8月2日 - 已在美国亚马逊上发表
已确认购买
I am a big fan of police procedurals and crime novels. I read a ton, and there is a lot of really good books in the genre. DON'T EVER FORGET isn't one of them. This book was my FIRST READS choice for August. I'm underwhelmed and unimpressed ...and i don't think i'm that picky!! I want a good plot that is somewhat plausible, AND decent character development, so I can actually care about what happens to the people in the book. I want people to behave somewhat like real people would behave in a similar situation. Mathew Farrell's DON'T EVER FORGET has none of that.

The only good thing I can say about the book is that the author does tie up all the loose ends. It doesn't make up for the ridiculous, convoluted, complicated plot: a conspiracy involving many people, who are not criminals and do not know each other, coming together to commit a terrible crime, for the most flimsy of reasons. Absolutely none of their motivations (all are different) make any sense. Here is an example: a promise that in exchange for kidnapping and murdering someone, your elderly mother will get an immediate liver transplant. (She has been denied because she is apparently considered too old for the operation.) This promise is made in a shadowy text message, by an unknown person, who there is NO reason to believe could have any influence or say in the matter. The motivations of the other co-conspirators are no more believable.

One last thought: How many psychos and serial killers is too many? Read this book, to find out. I don't like to be mean, but this story is flat-out ridiculous. I will actively avoid reading anything else by the author of this one. This book is missing almost everything that makes reading a pleasure.

This book is just terrible. I urge you to pick another one, instead.

A.M. Nixon
5.0 颗星，最多 5 颗星 Read it in one sitting.
2020年8月3日 - 已在美国亚马逊上发表
已确认购买
I don't normally read police proc. But I read the first pages, (even though it was free to me from Prime first reads) I already have a ton in my TBR, but as soon as I started reading, I wanted to read on and unlike the one negative review, I don't agree with, I thought it was very entertaining and not at all unbelievable. People who commit murder are a bit unhinged and unpredictable. I thoroughly enjoyed every page. Yes, there is some extra police procedure info, but as a Law and Order SVU fan I'm familiar with most. I believed it and thought the end was satisfying and unpredictable.
阅读更多
75 个人发现此评论有用
加入亚马逊Prime，从此免运费
亚马逊Prime会员可享海外购美/英/日/德跨境免邮，全年无限次！更有免费无限次阅读电子书服务
> 立即加入
了解我们
合作信息
帮助中心和购物指南