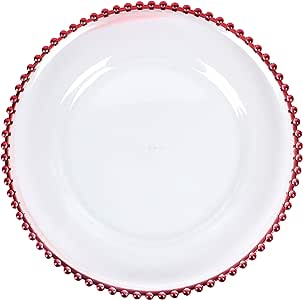 Ma in Birmingham
4.0 颗星，最多 5 颗星 Added necessary ambiance
2019年12月17日 - 已在美国亚马逊上发表
颜色: 金色已确认购买
I've reviewed these chargers before, however previous reviews were done before they were actually used. Overall, I'm still pleased with the purchase. I needed 300 chargers for my daughter's wedding which was held on November 29th of this year. I was originally ordering glass chargers, but after a while the gold beaded were no longer available, so I found these plastic ones instead. Originally they were $49 for a set of 12; but the price eventually rose to $52.99. Since I needed so many I actually contacted the company to request a discount, but that didn't pan out. They began including gold mats to add color underneath the charger. Nice but not something that i needed. The company was overall very efficient. They always arrived in a timely manner, and out of the more than 200 chargers that I ordered, there was only one broken as you can see from the above picture. Fortunately I didn't need as many chargers as I thought, so it worked out.
As you can see from the first two pictures above, the chargers are beautiful! If you don't lift them, it's difficult to tell that they are plastic. They in no way look cheap. To be honest, side by side with the glass, it's difficult to tell the difference.
These are the reasons however that I did not give them five stars: first, after using them, I noticed smudges and scratches from the plates that sat on them. They were not severely damaged from that one-time use, but after several more uses they will probably show wear quickly. Secondly, there are no care instructions included. While repackaging after the wedding reception, of course there was food stuck to some. I was afraid to emerge them in hot soapy water for fear that the gold might come off, so I watered down some Windex and cleaned them that way. I tried to avoid the gold beads, but on a couple I had to wipe food from that area as well, and as I feared, some of the gold flaked. And then there was one broken. It was at the very bottom of one of the boxes, so maybe it was dropped.
All in all I was pleased. They provided the ambiance that I wanted for my daughter's wedding. I hope this review was helpful. Beverly in Birmingham.

Zephanie Curlett
5.0 颗星，最多 5 颗星 Loved them!
2019年4月2日 - 已在美国亚马逊上发表
颜色: 金色已确认购买
The only thing I didn’t like is the fact that I didn’t order more, now they are no longer available
阅读更多
2 个人发现此评论有用

Griller57
2.0 颗星，最多 5 颗星 Nice looking but cheap material
2019年12月13日 - 已在美国亚马逊上发表
颜色: 透明已确认购买
Nice looking. VERY Thin. 2 were broken in the middle of the stack. Amazon did provide a small credit as we had ordered them for a party and didn't have time to return and replace them. Look elsewhere, we will in the future. Dollar Tree has much heavier charger plates.
阅读更多

Elaine
3.0 颗星，最多 5 颗星 Nice
2019年12月17日 - 已在美国亚马逊上发表
颜色: 银色已确认购买
I bought the used ones. For the most part they were all fine except scuffs in some areas. One of the chargers were broken. Of course the broken one was placed at the bottom of the stack...I felt that was done deliberately.
阅读更多