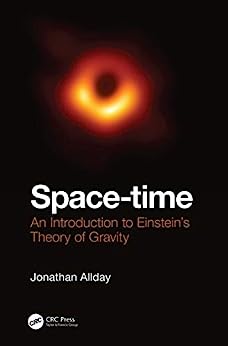 This book, suitable for interested post-16 school pupils or undergraduates looking for a supplement to their course text, develops our modern view of space-time and its implications in the theories of gravity and cosmology. While aspects of this topic are inevitably abstract, the book seeks to ground thinking in observational and experimental evidence where possible. In addition, some of Einstein’s philosophical thoughts are explored and contrasted with our modern views.

Written in an accessible yet rigorous style, Jonathan Allday, a highly accomplished writer, brings his trademark clarity and engagement to these fascinating subjects, which underpin so much of modern physics.

John Moore
5.0 颗星，最多 5 颗星 A Book Worth Your Time
2020年7月18日 - 已在美国亚马逊上发表
已确认购买
Coming to terms with Einstein's Theory of General Relativity has been a long-term objective of mine. Trained as an electrical engineer I figured it would not be impossible for me to come to grips with the concepts presented by his theory. Thus I began what has become a long journey through a not insignificant number of popular and technical texts on the subject. Jonathan Allday's Space-Time: An Introductin to Einstein's Theory of Gravity has proven to be the best of the books I have so far come across. Dr. Allday's treatment is complete (for my purposes), relatively gentle, and entertaining. He presents the mathematics and physics of the subject as well as some of the philosophy that is necessary to obtain a grasp of the significance of the theory. For my money, Chapter 4 (Space-Time) is worth the price of the book -- among other things it provides the best explanation of length contraction and time dilation that I have ever read. The book is not an easy read, and all but the most mathematically astute readers will likely find some difficult spots, however, a slow, careful reading of this text will pay enormous dividends towards enhancing one's understanding of the subject. I rated it five stars, but somehow even that feels like it falls short of what this book deserves. Highly recommended.
阅读更多
2 个人发现此评论有用

Publius
5.0 颗星，最多 5 颗星 A Goldilocks Text for General Relativity
2020年9月1日 - 已在美国亚马逊上发表
已确认购买
Review of Jonathan Allday’s Space-Time
I am a member of a science book club. We have been studying Einstein’s General Relativity for a long time now. We have used a number of textbooks along the way as our guide from more undergraduate popular accounts to graduate level texts. None has been completely satisfactory to meet the needs of a set of physicists, engineers and mathemati cians. The lower level texts just do not address the need for explanation that naturally come up. Finally, we all bought Jonathan Allday’s Space-Time: An Introduction to Einstein’s Theory of Gravity. For our book club, it truly was the Goldilocks text.
As some examples, the topic of curved space is central to General Relativity. The origin of Riemann Tensor is treated as in other texts. However, Allday goes the extra step by describing why the Riemann Tensor indices are covariant and contravariant-I have found no text that explains this. As another example under the heading of the Field Equations, Allday gives a physical interpretation of the Ricci tensor (“controlling how volume of an element evolves during geodesic flow”). Allday deepens my understanding of what the Ricci Tensor (which forms an element of the Einstein Field Equations) is and is not. Because the Ricci Tensor is a contraction-the only viable one- of the Riemann Tensor, the curvature of space-time is only partly determined by matter and energy. Allday describes the Weyl tensor-the remnants of the Riemann Tensor-and how this expresses how curvature determines curvature. The Weyl tensor governs how gravitational waves move through space-time. These examples show the depth of explanation Allday provides.
In the area of Special Relativity-a prelude to the central theme of General Relativity-Allday gives one of the best explications of time dilation and length contraction. I believe I finally have a good understanding of the effects. Moving forward to General Relativity, Allday contrasts the nature of time dilation in General Relativity with that of Special Relativity.
If I could, I would give this book six stars! It provides answers to questions that I have without having to delve into a much more mathematical treatment.

Scott H.
5.0 颗星，最多 5 颗星 A comprehensive, detailed, friendly introduction to general relativity. Excellent!
2021年2月3日 - 已在美国亚马逊上发表
已确认购买
I discovered and purchased Jonathan Allday’s Space-Time while working to learn the basics of general relativity (GR) as part of a local science book group (members have technical graduate degrees). Our group acquired a variety of texts (see text list below). None in our group had more than a brief exposure to special relativity in college. Finding satisfying explanations of GR concepts suitable for our experience and mathematical background was a challenge.

Space-Time hits a sweet spot between highly abstract and overly simplified explanation. Keeping the mathematics to a level familiar to math and science-oriented undergraduates, Dr. Allday clearly and methodically derives results he needs to advance from Newtonian mechanics through special relativity and into general relativity. He uses his own development of differential calculus to make his book accessible to people who may not have that background. His approach is to explain the rationale for construction of required equations, then write the equations with notation typically used in pre-calculus. This slightly alters the appearance of classic equations ( Maxwell’s equations, Poisson’s equation, etc.) but provides excellent insight into the equations’ origins and uses.

Topic areas from Space-Time I found helpful for understanding GR:
a) The significance of invariants: Allday gives a detailed explanation of why and how the Lorentz transformation is central to special relativity, and how quantities that retain their value despite transformation (invariants) are fundamental building blocks of the physical world. The mathematics required is familiarity with matrix multiplication and trigonometry.
b) Tensors and their application: Space-Time introduces tensors by showing a limitation of a vector: it can’t express the electromagnetic (EM) field, relativistically. This immediately motivates the need for a tensor. Elements of tensor calculation are brought in as needed for expressing the EM field. Later, Allday shows tensors’ application expressing other physical quantities. This is in contrast to other texts, where the mathematics of tensors is introduced first, often with puzzling terminology for the novice. I was more engaged by Space-Time’s “practical” approach of ‘motivate-then-backfill’ using the simplest tensor math possible.
c) The energy density tensor: Allday provides a valuable historical review of mass and energy to motivate the derivation of the energy density tensor T appearing in Einstein’s field equations. Detailed development of vectors in 4D space-time and Lorentz tensor transformation in earlier chapters allow him to demonstrate the construction of the energy density tensor and explain the meanings of each term in the matrix. Mathematics required is still at the matrix multiplication level; however the concepts of differential change of several variables are critical, whether obtained from this book or prior experience in calculus.
d) The metric and curvature of space: Allday supplies historical and philosophical background (citing A. Einstein, S. Weinberg, H. Bondi and others) to introduce the concept of curved space, the metric, and the Einstein tensor G. Treatments of the underlying mathematics - differential geometry - vary widely among texts, and can quickly bog down beginners’ discussion. Space-Time presents the essential math within the bounds of the skeleton calculus and tensor notation developed in the book. While this generates many equations (partly due to Allday's including helpful intermediate steps in derivations), the text emphasizes the physical ideas encoded in the equations.

The topics above are discussed in Chapters 1- 7. Einstein’s general relativity equation is G=kT, so at this stage the Space-Time reader has covered the basics of Einstein’s theory. To quote one of Allday’s many conversational asides to the reader, “I, for one, think we all deserve a cup of tea.”

The remainder of the book, Chapters 8-13, explores the applications of GR to situations of interest: our earthbound experience of GR and how it resulted in Newton’s laws, black holes, gravitational waves, cosmology, and the problematic reconciliation of GR with quantum theory. Equations are developed to support each topic, including a calculation for the age of the universe (in “The Recipe for the Universe” section of Chapt 12). Allday’s gratification comes through in a footnote: “There is something satisfying in using a spreadsheet to calculate the age of the universe and getting an acceptable value while sitting on a train to London.”

Space-Time brings the reader up to present day research in Chapter 13, with equations showing the basics of quantum gravity, quantum field theory, Hawking radiation, and the inflationary expansion of the universe (involving the Higgs field). Nonetheless, Allday remains at the same mathematical level (though the integral sign has appeared). He accomplishes this mathematical simplification by keeping the discussion to the basic elements of these subjects: what length, time, and energy scales constitute the domain of quantum gravity; what equation describes the rate of black hole evaporation; what is the expected extent of cosmic microwave background isotropy if there were no inflation; how is the energy density tensor T altered to account for energy responsible for universe inflation, and what makes that plausible? At the level of this book the depth of treatment of these complex subjects is limited, but my interests were satisfied.

In summary Space-Time was the single resource that covered general relativity most usefully for our technical book group. I found the mathematics accessible, the physical explanations compelling, and the historical context and conversational tone engaging. Space-Time is excellent.