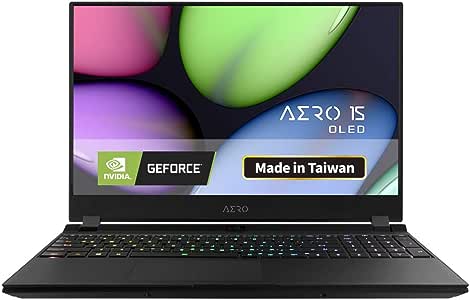 AERO: Unbridled Performance, Endless Possibilities Ultra-light, super-fast, with a gorgeous OLED display, the AERO 15 OLED is the first laptop designed specifically with digital creators in mind. Perfect for photographers, graphic designers and entrepreneurs on the go, the AERO 15 OLED offers unparalleled performance, stability, and does it all without overheating. From the beginning, the AERO series raised the bar of what a high-performance laptop should be; ultra-light, ultra-fast, with no limitations. Cutting edge engineering enhanced the end user experience by tackling the finer details, optimizing performance through calibration. The all new AERO evolves again from the inside out with an upgraded cooling system, refined aesthetics with an unparalleled visual experience, giving users the power to realize endless creative possibilities. With the AERO series, users can have lightning fast video or 3D rendering, or embrace smooth as butter gameplay of AAA game titles.

Derp
5.0 颗星，最多 5 颗星 Nothing Short of expectations - Both Pros and Cons.
2018年6月12日 - 已在美国亚马逊上发表
已确认购买
I’m writing this review 2 weeks into using the GIGABYTE Aero 15X v8-BK4 15" Ultra Slim Gaming Laptop 144Hz FHD Thin Bezel X-Rite i7-8750H, GeForce GTX 1070, 16G RAM, 512GB SSD, Metal Chassis, RGB Keyboard, Longer Battery Life”
**Note** Before I begin, I wanted to say the ‘cons’ part of the review goes out of the window if you have a little knowledge about computers and know how to clean install Windows and its drivers.
Cons:
- The screen bleed and bounce:

Now, because they have tried to reduce the weight of the laptop, they have compromised on the screen weight causing it to bounce a little bit (This is my logic but could be absolutely wrong). It is not the worst but I would expect better from a $2400 Laptop.

When you start the Laptop, you can see that screen bleed is present. This could be at random places for random machines. Mine is at both the bottom corners. It does not affect the screen when you use it but as someone with OCD it does bother me a bit that my screen bleeds.
Recommendation: Live with it
- The Bloatware:
I am a strong believer of harnessing the true powers of the hardware your computer possesses. This Laptop is a beast in that aspect. Naturally the bloatware slows it down.

Recommendation: I would highly recommend that the company come out with a version that doesn’t have bloatware. Charge $50-100 more if need be. If you’re a non-technical user, go to your local computer shop and get a clean windows install done. It makes this Laptop a beast.

- Mouse Hangs:
They use the ELAN driver to run the mouse. When we start an intensive process, the mouse will hang for about less than a second and go back to normal. This is something I would not expect from a laptop of this specifications.
Recommendation: Clean install does the trick.

Recommendation: The work around is to visit the Gigabyte website and download what they have up on there. It went back to normal.

- Caps doesn’t have a light:

This is a minor issue but the Caps lock button does not have a light to indicate if its on or not. The screen does show it but a light would be better.
Recommendation: Live with it.

- Games do not load sometimes.
Initially (I faced this the first week) the laptop takes time to switch from power saver mode to performance/game mode. This causes performance drops and Games do not load. The GPU suffers with power saver mode and the switch is not immediate (I understand where Gigabytes comes from because their marketing is based on the battery)
Recommendation: Get past the first week of frustration, update your drivers and this goes away and the PC performs flawlessly.

- Sound is above average at best
Now I’m no DJ or I do not work with sound or use my laptop’s speakers but the sound is somewhat weird. Like its coming out of a $10-dollar Bluetooth speaker. They do have fancy Dolby Drivers in there but I’m not sure if the hardware lives up to it.

- Drivers not in place = BSOD
I’m not sure which GPU is causing it but sometimes on startup I face BSOD due to a Video Graphics error. It is due to one of the Graphic cards. I’ve updated both the 1070 and the intel but still facing it occasionally.
My YouTube stopped working recently because of GPU Driver update. I did a clean install of the driver and it works fine now.
Pros:
- Light for what it packs:

You will immediately notice how sleek elegant and light the laptop is. I was truly impressed by how light it is despite having a metal chassis and the Hardware it has.

- Battery Life:
The battery life on this beast is phenomenal. Gives me 8 hours for office work and about 4 hours on intense gaming. Note: I would recommend plugging in when you game for better performance.

- The screen as clear as it gets:
The screen is beautiful and I can see every pixel on Adam Levine’s face on YouTube.

- Thunderbolt port:
It comes with a thunderbolt port and plenty of other USB ports. This means its future proof at least for the next 4-5 years.

- Fan Doesn’t sound like a helicopter or heat up as much:
If you plan on buying a laptop with this configuration, unless you set up some sort of water cooling, it is going to warm up. I purchased one of the cooling pads available on amazon but this laptop does not heat up as much as some others do. Stays silent too. Would recommend getting a cooling pad to extend the life of the laptop though.

- Overall handles intensive tasks with ease.
As an example: I run 3 Virtual machines talking to each other + Team Viewer simultaneously with ease and without lag. This set up gives me 4 hours of battery which is phenomenal. My GNS3, Pycharm, Photoshop also breezes through.
- Easy to upgrade:
Opening the laptop and upgrading it is easy. Anyone with YouTube can do it.

- The NIC on it is Blazing Fast:
The WiFi Adapter on this PC is amazing. The download speeds for me have been 10mbps- 15mbps on an average.
- Two Year warranty:
Most companies give you a year worth of warranty but Gigabyte gives you two.

Conclusion:
I spent a lot of time deciding between this the MSI variant (similar specs with 256 gb SSD) at 2k and the Razor (Ditto specs at 2.8K) and settled for this.
If you’re a power user go for it. It’s worth the money. Zippy and Light. If you’re a moderate user: Go for something cheaper and If you’re rich: Just buy it anyway.
I would love to end this by repeating that doing a clean install of windows on this will make you fall in love with this laptop.

The hardware on this machinery is amazing:
- No coil while
- Very low fan sounds (almost none)
- No light bleed
- The webcam position is not great, but personally I am not planning on using it
- For being a gaming laptop, it is very light and portable ~4.5 pounds (almost same as the macbook pro)
- Battery on Windows around ~9 hours (2 hours if freezing cursor fix is applied). With my Ubuntu settings around ~4 hours, I haven't been able to achieve greater than that. I tried switching to Intel, using "prime-select intel" but it consumes more energy.
- I've tested a couple of high intensity graphic games and it really looks pretty solid. No frame drop using all high settings

The software out of the box is not so great:
- I had some issues with the keyboard. While typing, it was performing double strokes occasionally. (Fixed with latest firmware update using Windows Gigabyte software Smart Update)
- Out of the box, the touchpad is not great on Windows 10, but it works perfectly on Ubuntu 18.04. (Fixed by updating drivers manually by right clicking on device manager and performing an automatic update. It works even better by using Microsoft Precision drivers)
- Cursor freezing problems related to Intel CPU + GTX Nvidia - This also happens on Razer and other computer brands. (Gigabyte has a fix on their support page called WakeupGpu, at the cost of battery life)
- While installing Ubuntu 18.04 I had some installation issues. I was not able to proceed as it was constantly freezing during install (Fixed by installing Ubuntu using wifi and adding "nomodeset" only during installation boot)

Overall:
I would say this computer is amazing, their software is not that great out of the box but it can be tuned to make it perfect
阅读更多