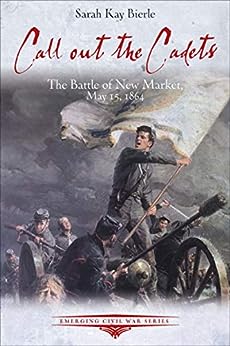 The battle of New Market came at a crucial moment in the Union’s offensive movements. It would also be the last major Confederate victory in the Shenandoah Valley. The outcome altered campaign plans across the North and South, while the bloody battle changed the lives of those who witnessed or fought it.

In the spring of 1864, Union Maj. Gen. Franz Sigel prepared to lead a new invasion into the Valley. Confederate Maj. Gen. John C. Breckinridge scrambled to organize a defense. Young cadets from the Virginia Military Institute were called to the battle lines just days after leaving their studies. When the opposing divisions clashed on May 15th, 1864, local civilians watched as the combat unfold in their streets and churchyards and aided the fallen.

In Call Out the Cadets, Sarah Kay Bierle traces the history of this battle, covering its military aspects and shedding light on the lives it forever changed. Youth and veterans, generals and privates, farmers and teachers—all were called into the conflict or its aftermath, an event that changed a community, a military institute, and the very fate of the Shenandoah Valley.
阅读更多
Previous page
Next page
由于文件较大，下载时间可能较长。
›  查看更多商品促销信息

cwgvmi
5.0 颗星，最多 5 颗星 Call to duty
2021年6月8日 - 已在美国亚马逊上发表
已确认购买
Excellent book about a pivotal battle in the Shenandoah Valley and the part played by the VMI Corps of cadets
阅读更多
1 个人发现此评论有用

yawaysvoice
5.0 颗星，最多 5 颗星 battle of new Market
2020年7月7日 - 已在美国亚马逊上发表
已确认购买
in this day and age its important to continue to educate ones self about one of the most important chapters in our history this book helps do just that with the little big battle in the valley of Northern Virginia.
阅读更多
2 个人发现此评论有用

Teddy S. Stotler
1.0 颗星，最多 5 颗星 Historically Unsound
2021年6月15日 - 已在美国亚马逊上发表
已确认购买
I was shocked to find out what an unprofessional and totally unsound work this is. No bibliography or footnotes. Went to website cited on table of contents page for footnotes but the title was not even cited. Anyone citing this for any college level course would be asking to have his paper returned as unacceptable.
阅读更多
1 个人发现此评论有用

David Marshall
5.0 颗星，最多 5 颗星 Great battlefield guide that goes along with the classic books
2019年6月4日 - 已在美国亚马逊上发表
Numerous battlefield tour guides have appeared in recent years. Most of them have provided a guide to a major engagement, while a few have covered movements prior to or after the battle. The guides vary in the detail in the narrative and the number of visited sites. Sarah Kay Bierle’s “Call Out the Cadets”, looks at the battle of New Market from May 15, 1864.

Unlike the typical guide, this new work published by Savas-Beatie covers the changing nature of Civil War combat and horrific casualties. This outstanding volume of the Emerging Civil War Series takes place in Virginia in 1864, where the Confederate Army led by General John C. Breckinridge faced the Union Army led by General Franz Siegel. One of the war’s important but smaller battles is unique because of the fighting by the Virginia Military Institute Cadet Corps as an independent unit. These brave young men were identified by the commanding general for greatly assisting in a Confederate victory. The fighting was fierce, but portrays individuals as courageous, driven to succeed and commitment to a cause.

The author has included 16 important stops throughout this narrative on this lengthy tour with GPS coordinates at each site. The driving tour follows the New Market State Battlefield Historical Park and the Shenandoah Valley Battlefield Foundation’s tours of the area, along with a few locations off the beaten path driving tour. The author wants all trampers to be cognizant that there are no safe pull-outs on the drive along Route 211 to the top of New Market gap to view the scenery. People will be able to enjoy the many monuments and markers that are nicely identified by the authors. It is suggested whenever possible to park on the road shoulders while not protruding into the roadway. Caution is urged while following the tour especially on congested and busy roads that have developed around all locations.

A tour guide that has many sites and embraces so many miles must be clear and precise in its directions, which this guide does well. The detail provided at each stop is well-written and not overwhelming. This great historian author uses quotes from participants judiciously. The book is well researched and examines key moments of the battle from both a strategic and tactical perspective. Readers will not only learn what happened but will be provided to why from both a Northern and Southern perspective. The writing is clear, balanced and informative.
Ten detailed maps clearly illustrate key moments during this battle as well as the troop movements. Cartographer Hal Jespersen produced a series of clear, concise and detailed maps that appear in this 192-page volume which will be helpful to everyone who reads and uses this volume as they drive throughout the battlefields. An understanding of terrain is crucial in any engagement, and the authors include a good breakdown of it. With each phase of the battle, the author reveals how the terrain features helped and hindered attackers and defenders. There are 180 helpful images with photos of key players that will enhance the reading of this readable narrative. For people that love monuments, you will not be disappointed by the photos and insight provided. Both visitors and armchair enthusiasts will love the many pictures and maps. For individuals who enjoy studying artillery, you are going to learn and become even more informed.

The author has been studying the Civil War for several years and is currently the managing editor for Emerging Civil War blog. Colonel Keith E. Gibson wrote a wonderful and helpful foreword for this tome. Bierle has been assisted or inspired by/with her research by has been helped by Shenandoah Valley Battlefield Foundation members Dara Green, Kevin Walker and historian Dan Davis.

This tour will undoubtedly take several hours which for a casual visitor to the battlefield, the text should be a welcome companion. Serious Civil War buffs will find the narrative to have much to offer, novices should enjoy the introductory story and battlefield trampers will love a well-planned route and excellent tour.