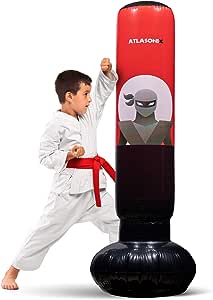 Sparty
4.0 颗星，最多 5 颗星 Design flaw but Amazing Customer Service
2019年11月27日 - 已在美国亚马逊上发表
已确认购买
My 7 year old busted this in less than 1 day. He wasn't doing anything overly aggressive, just punching it with some kid boxing gloves. After a few hours of playing with it, it began to leak air and sag. It no longer holds air as there is a tiny hole somewhere along the seam (I'm guessing).

Speaking about the seam. Just a word of caution. The seam running up and down the punching bag sticks out maybe 1/8 of an inch. That does not seem like a lot visually, but the seam is finished with a harder plastic edge. Because of this if someone is punching the bag and another person gets hit with the seam side, it can actually scratch them. This was definitely a buzz kill for my kid. A quick fix was covering the seam with electric tape. However, i do not feel like its the consumers job to fix a product so it will not scratch them right out of the box.

In summary, next time i will pay a little more $$$ to purchase a product that is built more sturdy, and not a scratching hazard.

***UPDATE***
Let me just say how impressed I am with the Customer Service. The seller immediately contacted me to discuss the issues i had. They were professional and apologetic. They told me they would be contacting the manufacturer to inquire about the seam scratching (which to me is a bigger deal than a one off defective bag). Not only did they give me a full refund without me even asking about it, but they also offered to send a free replacement. As a customer, that is all i can ask for. I adjusted my rating of the sellers based off their amazing Customer Service.

May
5.0 颗星，最多 5 颗星 My Karate kid loves it
2019年11月3日 - 已在美国亚马逊上发表
已确认购买
Got it for my almost 5 years old karate kid, my son started Martial art classes since July of this year , so he is fairly new to it , this is a great way to practice his PUNCH PUNCH KICK KICK moves , he absolutely loves it , sometimes we take it out to the backyard so he can practice with my husband away from my toddler, we used water to weight it down
Just have a pump handy before you get it , we didn’t but it wasn’t a big deal, I ended up finding a hand pump at the dollar store so I have it handy if we need to put more air in the future.
Overall great buy

Gloria Ballard
4.0 颗星，最多 5 颗星 Lasted less than six hours U(PDATED)
2020年2月13日 - 已在美国亚马逊上发表
已确认购买
This arrived yesterday. It assembled easily (I used an air mattress pump) and my 7-year-old was delighted with it. He immediately began in on it - punching and kicking almost without interruption for about two hours straight. And I thought I’d finally found a way for him to take out his boundless energy on something other than his sister...

Less than six hours later it had a hole on the top that I’d had to duck tape because it bumped up against an air conditioning vent, and the bottom was leaking water. It’s currently sitting in my tub, completely deflated and slowly draining the water.

He and I are both very disappointed, to say the least. I expected better for $40, and the fact that he spent all of his Christmas money on it makes it worse. My son was pretty rough with it, but it’s a punching bag, for crying out loud. It’s supposed to be made to be punched and kicked and generally abused.

UPDATE: After my last review, the business owner quickly contacted me and offered me a full refund AND a free replacement. When the second one arrived we set it up again, with a couple of changes: I swept out the garage (TWICE) to ensure that there was nothing on the floor that could puncture the plastic if it were to land on it, told my son to keep it in the EXACT MIDDLE of the garage so it wouldn't bump up against anything, and filled the bottom with aquarium gravel instead of water.

We're on day four or five of having it set up, and so far it's holding up great. He's been pretty rough with it, and so far it's not leaking air or showing much sign of wear and tear. Granted, we're being pretty careful as far as not letting it touch anything other than a well-swept floor, but still. Which has been a godsend, because we are a week into self-quarantining for Coronavirus, and it's been helpful in keeping the my high-energy, extroverted seven-year-old son sane. Hoping it holds up for however long this lasts. Giving the product four stars just because we're having to be so careful with it - other than that I'm very pleased with it this time around.

O.G.A
5.0 颗星，最多 5 颗星 Great for energetic kids!
2019年11月14日 - 已在美国亚马逊上发表
已确认购买
Bottom line:
MY KIDS LOVED IT!
It kept 6 kids, ages 3-10 very very busy for over an hour! (if you have boys in these ages you'd know they have tons of energy to spend..).
The product came in a small box and you'll need to fill the base with water and fill the 'body' with air.
The base was a bit hard to fill with the hose (not sure if it's something with ours or not though) but since it didn't fit directly, it took some time and some water splashes to fill it out- nothing dramatic, just follow the seller recommendation on the set up, we didn't so it took us longer.

The body part- super quick and easy, we had an old electric pump that did the job and it exactly took 5 minutes.

We got this punching bag a week ago so I can't testify too much about durability yet.

To sum up, I was looking for a punching bag for my kids that wouldn't be pricy but will survive my kids.
looks like this product ticks all the right boxes.
阅读更多