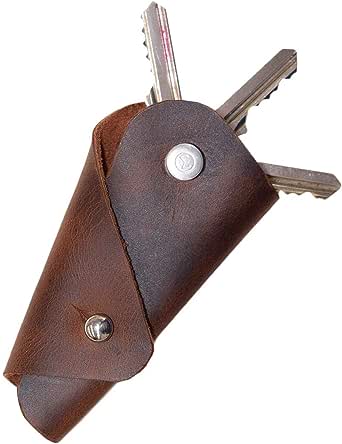 Andrew G
5.0 颗星，最多 5 颗星 Great craftsmanship, needs a little extra to keep other bits and bobs attached
2019年7月27日 - 已在美国亚马逊上发表
已确认购买
I've burned through a handful of key organizers and reinvented keychains. Bought this specifically because I was tired of double-sided key bars and wanted something that would wrap around and keep the keys from jingling around (my previous key organizer was a bar and the keys would constantly come loose).

The leather workmanship is excellent on this . The key bar/post that comes with it is a little too thick for some of my keys, by maybe two millimeters. I disassembled my previous key organizer and used a thinner post from it for my keys. Also included a keychain (should've bought the wrap-around organizer from H&D with a keychain built in) from my old bar.

Feels great, was able to make it exactly what I wanted with a little customization and some spare parts. If you need to attach other keys, get the H&D key organizer with a keychain on it. I'm not brave enough to keep my car keys separate from my house keys and there's not really a good way to attach a keychain to this. Not docking it a star because I bought it because the form and function was exactly what I wanted - keychain was an afterthought.