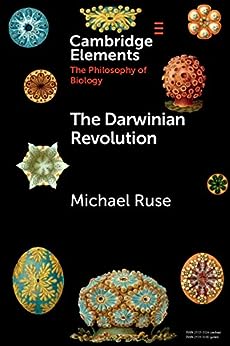 R. Albin
4.0 颗星，最多 5 颗星 Excellent Intellectual History
2001年1月22日 - 已在美国亚马逊上发表
This is an excellent book by a distinguished scholar who is also a fine writer. The Darwinian Revolution is the story of a scientific community producing and assimilating one of the most momentous sets of ideas in human history. Ruse deals thoughtfully and carefully with the scientific, philosophic, religous, and social background of British biology in the early 19th century, how this community became focused on the issue of evolution, how Darwin integrated himself into this community, and how this community dealt with the consequences of Darwin's work. Ruse does a fine job of describing the work of Darwin and his precursors, provides a nice and concise social history of this community, deals sensitively with the religous dimensions of these issues, and does a really commendable job of examining the state of philosophy of science in the early Victorian period. Written about 20 years ago, the conclusions of this book are still largely valid and Ruse provides a nice afterword to this edition to update his thinking on these questions. Ruse is a clear writer with an almost conversational style. This is really the book for readers interested in beginning an exploration of this interesting topic. This is also an excellent companion volume to Janet Browne's superb biography of Darwin, still incomplete, because it covers much of the same ground but with an emphasis on this community of British scientists rather than Browne's focus on Darwin himself. A particularly interesting feature of the book is Ruse's explanation of the reception of Darwin's ideas by his colleagues. Ruse points out that the academic biologists were largely able to go only part way with Darwin; they accepted evolution as a doctrine but were more resistant to the importance of natural selection. There were both internal scientific and external philosophical/social reasons for this relative resistance to Darwin's scheme. The full triumph of Darwinism has occurred in this century with the development of population genetics and more recently, large scale ecological experiments and studies.
阅读更多
11 个人发现此评论有用

James M. Cargal
5.0 颗星，最多 5 颗星 Fascinating overview of Darwin in his own time
2000年8月28日 - 已在美国亚马逊上发表
Michael Ruse does a masterful job of showing the context of Darwin's work. Ruse, who is a professor of philosophy covers in great detail the culture of Darwin's time with a great deal of information on the biological theories of Darwin's day along with many of the major players and their various attitudes and especially their philosophies of science and in particular biology (and geology). This book is a must for anyone who wants a good historical view of Darwin. It is well written and clear but it is not a light read and it is not for the casual student.
阅读更多
10 个人发现此评论有用