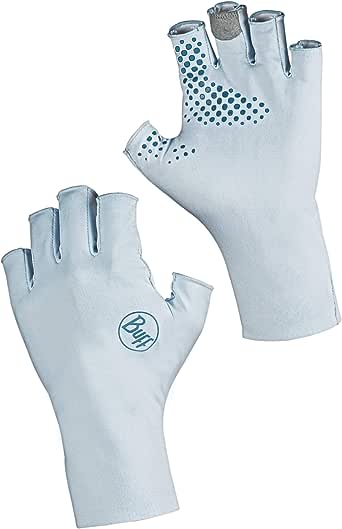 Drummer Boy
4.0 颗星，最多 5 颗星 Very lightweight, which can be good and a compromise at the same time
2019年8月31日 - 已在美国亚马逊上发表
已确认购买
The good:

1) So light that even on the 100 degree day I fished with them, I didn't even feel like I was wearing gloves, unlike the Outdoor Research, Columbia Terminal Tackle and Glacier Gloves I tried on. Those were all so hot and none of them felt like they "breathed" like they claim. In fact, all those other gloves felt like I was suffocating in them, and I only wore them for a few minutes either in my air conditioned house, or at a store! But the Buff gloves feel great, even out in the summer heat.

2) Love the short fingers of the Buffs, unlike the others that are all 3/4 finger length. I don't like gloves where the finger material is so long that it's between my fingers and the rod or reel. You lose feel, and they feel more stifling.

3) Caught 14 bass my first time out with them, and while I normally lip bass, there are times when I have to grab them with my whole hand, which means the palm of the glove is around their body. I had no problem doing either, and the gloves did not slide around, and despite how thin they are no rips developed even with direct contact with the bass.

1) So far, I've used them only once on a 4.5 hour bass fishing outing, and they got filthy, especially since I got the light blue (their color name for light blue is Key West). As mentioned above, I landed 14 bass with them on, with no issues. They didn't stink like fish, but the palm-side of the gloves got very dirty. Although they say to wash with mild detergent, there's no way that would have done anything. I put them on, added some Dawn dishawshing liquid to the palm-side only, and rubbed my palms together. They still looked quite dirty, but I didn't want to keep rubbing for fear of wearing them out (that's how thim they feel). I didn't put soap on the back, because the backs weren't dirty on that side at all, and I suspect they advise using mild detergent so as to not prematurely wear off the SPF protection. But, in the end, just having some material covering the back of your hands is better than nothing, so if the SPF eventually washes off from contact with some soaps, I won't care. Although they don't look as dirty now that they've dried from washing, when (not if, since they're so thin) these wear out I will get the Green Tea color, which is really a grey, so the dirty palms don't look so bad. I recommend you do, too.

2) They are super-thin, and feel kind of like you're pulling on silk glove liners. I feel like I have to be really careful putting them on and taking them off. Although nothing ripped, and no stitching came unraveled, being that they're so thin, I can't see them lasting very long. If I only get a season out of them, and have to get a pair every year, it's still better than risking skin cancer.

3) I think the designers at Buff must only have one finger on each hand, because I really don't see the benefit of having a single finger-pull on only the middle finger. Don't most normal humans have to pull on all fingers and a thumb to properly remove gloves? I can't even imagine what they were thinking at Buff by not putting finger-pulls on ALL fingers and the thumb, because by virtue of these gloves being so thin, I can see that THAT is the one thing that will cause premature stitching failure. Oh wait, maybe that's the reason for not fitting all digits with finger-pulls... so they DO rip, and you have to buy another pair.

Did I mention these gloves are thin?

Seriously, can they be better? Absolutely, by adding finger-pulls to all digits.

Can they be more durable (not that the pair I have failed in one outing)? Probably, but then they'd likely be too darned hot, like all the others. I didn't even bother trying the next Buff model up for that very reason.

Will I buy them again? Unless someone comes out with a glove that feels as good on the hands as these do, without being hot, and has a more durable fee, and/or has more finger-pulls, I would definitely buy these again for $18.
阅读更多
2 个人发现此评论有用

JennaS
4.0 颗星，最多 5 颗星 A very comfortable sun glove
2019年5月28日 - 已在美国亚马逊上发表
已确认购买
These are realy nice sun gloves. They are a bit lighter and less cumbersome than some competing products. The seams are less bulky and the termination of the fabric at the wrist and fingers is heat sealed vs stitched which makes for a easier and more comfortable fit. My only concern is longevity with the lighter fabric, but so far they are holding up well!
阅读更多
2 个人发现此评论有用

Brian
5.0 颗星，最多 5 颗星 Very good on a backpacking trip.
2018年6月25日 - 已在美国亚马逊上发表
已确认购买
Just got back from a week-long backpacking trip in the Sierras. These were very handy; preventing sunburn, abrasions, and slightly helping keep mosquitos away (they can bite right through these, but the gloves help a small bit).
阅读更多
4 个人发现此评论有用

Pat K.
5.0 颗星，最多 5 颗星 Good Quality
2019年6月10日 - 已在美国亚马逊上发表
已确认购买
Nice quality and good fit for my husband who bought these to protect his hands while playing tennis and windsurfing in Florida. He got the idea from a windsurfing instructor who was wearing them.
阅读更多
1 个人发现此评论有用

Karl K. Wilhelm
5.0 颗星，最多 5 颗星 A Fishing Must Have in the Summer Sun
2019年7月23日 - 已在美国亚马逊上发表
已确认购买
Spending long days fishing in the sun this season. These gloves have done yeoman's work. Work perfectly, light, tough (relatively speaking - they are super light), easy to launder. This won't be my last pair, and I'll probably keep an extra or two in the boat next season for guests/clients to use. Great product!
阅读更多
加入亚马逊Prime，从此免运费
亚马逊Prime会员可享海外购美/英/日/德跨境免邮，全年无限次！更有免费无限次阅读电子书服务
> 立即加入
了解我们
合作信息
帮助中心和购物指南