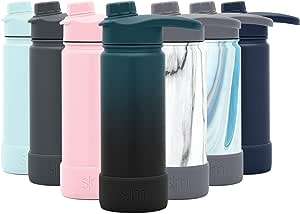 Customer
4.0 颗星，最多 5 颗星 Awesome Quality! Ice Cubes Last For HOURS
2019年10月25日 - 已在美国亚马逊上发表
已确认购买
I bought this after I rendered my previous bottle unusable (long story short, I dropped it on cement). I was debating between this or the Hydro Flask. Both had great reviews but I eventually decided on this one because I really liked the colors that they have. Of course the fact that it’s cheaper also works in my favor too.

Like most people I bring it to work with me. I simply refuse to buy bottled water, it’s a waste of money and bad for the environment. Every morning I fill the bottle up from my water pitcher in the fridge. I add a few ice cubes, close the lid and go on my way. The first time I used it I was surprised the ice cubes actually lasted the whole day. I’m not kidding when I say that they were still there 8 hours later. Obviously they shrunk a bit but the fact that they’re still there was impressive in itself. With my other bottle, the cubes lasted a couple of hours tops.

Hot drinks: I don’t drink hot drinks nearly as often but I did try it for coffee the other day. It held the temperature just all well. In fact it was so hot even after I got to work that I had to open the lid for 10 minutes to let it cool down.

As far as I’m concerned the bottle is well made. It comes with two lids but I usually only use one since the other one is meant for hot beverages. If you want you can stick a straw in too, I do that sometimes. I haven’t dropped it yet (and don’t plan to) but my overall impression so far is positive. Nothing flakes off even if you wash it. I’ve put it in the dishwasher (always top shelf) with the rest of my things and it came out perfectly fine. Usually however I wash it in the sink. I have a bottle brush that I use that makes it easy to clean it effectively. The only caveat is that I have to rinse it with vinegar afterwards if I use it for coffee otherwise it leaves a coffee after taste.

Other pros that are worth mentioning:
- Fits nicely in most cup holders
- Came with a coupon that gives you a free cap (you pay shipping)
- No leaks or spills
- Matte/powdered finish looks sleek and modern
- Dozens of colors that you can choose

Cons:
- Your nose will touch the flip part when you’re drinking
- Sometimes the lid is hard to open and close
- The plastic on the handle is a little sharp on the hands

I definitely like it a lot better than my old better. I highly recommend them. They come in so many sizes and you get free lids too! Fabulous. I want to say I’ll buy a second but seeing as how its holding up so well that might not be for a while.

Nicholas
2.0 颗星，最多 5 颗星 It's vacuum insulation is astonishing... but it becomes useless if the lids are not well designed.
2018年6月4日 - 已在美国亚马逊上发表
已确认购买
It's vacuum insulation is astonishing... but it becomes useless if the lids are not well designed.
The 22 oz version comes along with a stainless steel lid and a flip lid. The stainless steel lid provides vacuum insulation and is leak proof, both of which are great BUT when it comes to usability it fails: the hole for drinking is too wide, so forget about drinking while on the move if you don't want to splash water all over.
The flip lid solves that problem, the drinking hole is small so you can drink while on the bus or walking BUT it's not vacuum insulated nor leak proof, so forget about cold drinks (the lid sweats A LOT) or putting the bottle in your bag (it will leak).
What's worse, I contacted Simple Modern about this and they just replied the do have a lid that is vacuum insulated, leak proof and has a small hole for drinking, so I could proceed and buy it. To be fair, they gave me a coupon so the lid would be free when buying from their webpage BUT I would have to pay for the shipping. I don't live on the US, and every buy I make comes with extra taxes. I decided not to buy the extra lid, cause I think that when you buy a product, that's it, you shouldn't have to pay extra in order to rectify deficiencys.
阅读更多
270 个人发现此评论有用

Ntombi A. Peters
5.0 颗星，最多 5 颗星 This might be The One!
2018年8月11日 - 已在美国亚马逊上发表
已确认购买
Probably like many of you, I’ve been searching for the perfect water bottle for a couple of decades now. Every time I think I’ve found one, a glaring defect emerges. It leaks, it doesn’t hold enough, the opening is inconvenient, it’s too wide for the cup holder, etc. etc. etc. I began to think I was searching for a unicorn, something that doesn’t exist in my reality.

And then Prime Day came along. I wasn’t planning to buy anything, but I browsed anyway. And there, among the rest, was the Simple Modern Summit water bottle. Eighteen bucks normally, and even cheaper on Prime Day? Eh, I’ll give it a go. The worst that could happen is that it’ll end up in the cupboard I call Graveyard of Disappointing Water Bottles, like all the rest.

I chose the 22oz, which is the largest capacity that will still fit into my Toyota Corolla’s slightly-too-narrow cup holders. It’s actually a really good size, as it’s enough water for a few hours out and about, without being too heavy to carry comfortably in one hand.

The double insulation is extremely effective: it’ll keep fridge-cold water cold for 24 hours in a car sitting in direct sun during a ridiculous heat wave. Maybe even longer, but I ended my test at the 24-hour mark, because let’s not get ridiculous. I also often have tea in it, which will stay hot—very hot—for many hours, including overnight. Be careful with hot beverages: I leave the lid off for ten or so minutes to let it cool enough that I won’t burn my tongue (again) before closing it up.

I like the different lids that come with it, including the chug lid you can get from the company for only the cost of shipping. Unfortunately, there were no lid colors other than black available when I ordered, but whatever.

I did get a bottle washer (I chose OXO’s water bottle washing kit, which is cheap and comes with three pieces for all the parts of the bottle), because it’s almost impossible to effectively clean it otherwise. The bottle body is NOT dishwasher safe, though the lids are.

Okay, I’ve rambled long enough. In closing, I’ll say that, not only is this bottle The One, I appreciate it so much that I bought a second for myself in blue and recommended it to several people. All this, and I’ve only had it for less than a month!

As always, I’ll update if my opinion changes, or it suddenly explodes on me.

~~~~~~Update after seven months~~~~~~
Amazon sent me an email about this review, so I thought I’d update my thoughts.

I still use one or both of my bottles daily, and I’m still super happy with them. In fact, I was extolling the virtues of the bottles to a friend just yesterday.

One of my chug lids broke, but I had a tendancy to hold it at its weakest point, so I’ll count that against both me and the lid.

Other than that, everything is still great.
阅读更多