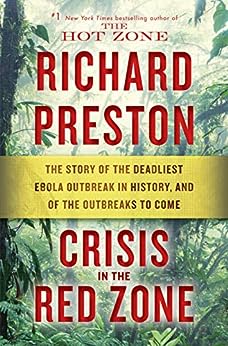 Crisis in the Red Zone: The Story of the Deadliest Ebola Outbreak in History, and of the Outbreaks to Come (English Edition) 1第一 版本, Kindle电子书

“Crisis in the Red Zone reads like a thriller. That the story it tells is all true makes it all more terrifying.”—Elizabeth Kolbert, Pulitzer Prize–winning author of The Sixth Extinction

From the #1 bestselling author of The Hot Zone, now a National Geographic original miniseries . . .

This time, Ebola started with a two-year-old child who likely had contact with a wild creature and whose entire family quickly fell ill and died. The ensuing global drama activated health professionals in North America, Europe, and Africa in a desperate race against time to contain the viral wildfire. By the end—as the virus mutated into its deadliest form, and spread farther and faster than ever before—30,000 people would be infected, and the dead would be spread across eight countries on three continents.

In this taut and suspenseful medical drama, Richard Preston deeply chronicles the pandemic, in which we saw for the first time the specter of Ebola jumping continents, crossing the Atlantic, and infecting people in America. Rich in characters and conflict—physical, emotional, and ethical—Crisis in the Red Zone is an immersion in one of the great public health calamities of our time.

Preston writes of doctors and nurses in the field putting their own lives on the line, of government bureaucrats and NGO administrators moving, often fitfully, to try to contain the outbreak, and of pharmaceutical companies racing to develop drugs to combat the virus. He also explores the charged ethical dilemma over who should and did receive the rare doses of an experimental treatment when they became available at the peak of the disaster.

Crisis in the Red Zone makes clear that the outbreak of 2013–2014 is a harbinger of further, more severe outbreaks, and of emerging viruses heretofore unimagined—in any country, on any continent. In our ever more interconnected world, with roads and towns cut deep into the jungles of equatorial Africa, viruses both familiar and undiscovered are being unleashed into more densely populated areas than ever before.

Dandy
5.0 颗星，最多 5 颗星 A life or death learning experience
2019年8月11日 - 已在美国亚马逊上发表
已确认购买
I have read all of Richard Preston's books. The first one I read, "The Demon In The Freezer" was very exciting. I thought it was fiction. Only half way through, did I really check it out and realized, "No, this is REAL." That led to "The Hot Zone" which is scary as hell too. Now the "Red Zone" is about Ebola, 2014 in the Congo and the deathly efforts to contain it. I didn't know, that sweat from an Ebola infected person...who doesn't even KNOW they have it yet, is SO infectious! This book tells just how this virus changes, adapts and lives to infect by changing it's DNA to survive. Why is this so scary? When you have 1000 unvetted people dropped off in Texas from know Ebola infected countries, it scares the hell out of me. There is a 21 day incubation period, that a person might not know they are infected and spreading it. Did I mention how this microscopic monster adapts? What if that incubation period goes from 21 days to 42 days? Two weeks after the news report of the people from Congo, Camaroon, and Ghana were dropped off in Texas, the World Health Organization declared a global emergency on the Congolese Ebola. Why? Because it has spread from that country. The Congo is surrounded by SIX other countries. I think the WHO has declared a global emergency only once or twice in it's history. So, if you are concerned for yourself, your family and friends and want to be prepared, read this book, "The Hot Zone", and especially "The Demon In The Freezer", about smallpox, which has been eradicated due to vaccinations. BUT, it is SO easy so easy to make in a simple basement lab with things bought off the web. Can we say, "bio-terrorism"? One suitcase of smallpox smuggled through drug cartel tunnels in San Diego, could kill hundreds of thousands in six weeks.
阅读更多
35 个人发现此评论有用

Mary C. Barclay
5.0 颗星，最多 5 颗星 A timely read
2020年3月16日 - 已在美国亚马逊上发表
已确认购买
The biology of viruses is both fascinating and frightening, especially when human behaviors are added to the mix. Preston’s in-depth exploration of the 2013-2014 Ebola eruption in Guinea includes the search for patient zero, and a detailed accounting of the fatal virus’ progression. He reaches back to his 1994 non-fiction best-seller, THE HOT ZONE, artfully weaving in details of the Zaire Ebola outbreak of 1976. Preston irrefutably links the consequences of understandable misdiagnoses at the outset and breaches in universal precautions along the way to the explosive spread of Ebola. The gory details are not suitable for squeamish readers, but the horrors are somewhat humanized by the inclusion of stories involving generations-old cultural traditions that helped grieving family and friends; traditions that ultimately became a death sentence to those participating in them. Given the recent global concern regarding COVID-19, Richard Preston’s non-fiction CRISIS IN THE RED ZONE is an educational, timely read.
阅读更多
6 个人发现此评论有用

UK76girl
5.0 颗星，最多 5 颗星 A diverting book that you won’t be able to put down!
2020年7月21日 - 已在美国亚马逊上发表
已确认购买
This is a work of nonfiction, but it reads like a novel. I was riveted from the very beginning! And while it was written prior to Covid 19, we can learn many lessons about what we are dealing with today, and how the Ebola outbreaks were handled. As the author said, the Ebola outbreak ended when people decided to practice the ancient rule and change their behavior. And so it will be for Covid 19.

The author writes beautifully about the people in the hospitals and those that helped them, be it doctors and nurses as well as experts from other countries; especially America. You really care for each and every one of these very brave people. This is an excellent book and I highly recommend it.

Kindle Customer
4.0 颗星，最多 5 颗星 Really good for a deep dive on the 2014 timeline but
2019年12月2日 - 已在美国亚马逊上发表
已确认购买
Not as rich in detail as The Hot Zone was. Or in detail about just how inadequately we are prepared in the US for a level 4 contagious viral outbreak with a high mortality rate. I know that had to be a lot of details to filter through to get it correct and Preston tried to let the personalities shine through the sludge of facts but it all fell a little bit off to me. I understand why the rioting was mentioned many times as it was a factor in MSF's decision to do what they did but it left a lot of issues unanswered for me.

Of course I think everyone should read this and understand that Filoviruses and other emerging viruses are scarier than we could ever imagine.