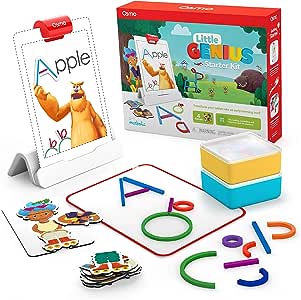 K. Ruger
3.0 颗星，最多 5 颗星 Fails to live up to my expectations...
2019年8月6日 - 已在美国亚马逊上发表
已确认购买
I was really excited when I pre-ordered this. My initial thoughts are that the games are not as well developed as could be. The character and scripts are under developed, and the game doesn’t actually check the work the child is doing so even if the letter is made incorrectly in the alphabet game the character says something from a series of stock phrases. Sometimes the game doesn’t read correctly what is on the mat, so I’m the costume game, for example, we have had trouble moving the story forward because we have the feet with the boat and the game
Still thinks we have the tutu on the character.

There is no number practice, only letters, and I wish there were more learning - phonics, and as I said, numbers, colors, etc. I think this is a good first attempt but I think there is a lot that can be improved. Scripts and character development, more attention to detail, and some additional games not requiring more to buy. This is pretty expensive for what we got. I pay less for Marco Polo for a year and feel like I get more value out of that.
阅读更多
117 个人发现此评论有用

cobaby
5.0 颗星，最多 5 颗星 Perfect addition to our Osmo collection!
2019年7月29日 - 已在美国亚马逊上发表
已确认购买
I had to grab this new kit before school starts up again so that our streaming video service can get a rest haha. My kids are 6 and 4 now and we've had the Genius Kit for a few years already. They enjoy all those games but aside from Monsters the other games are difficult for them to use without help.

This Little Genius kit is much better for both of them, perfect for the last years of pre-school/pre-K and K. So far it seems that they can play the games independently, or with my oldest helping her younger brother. It reminds me a lot of the activities they've been doing in "school" the last few years. Also this is something we could bring with us on vacation because there are fewer little parts and pieces that could get lost compared to the Genius kit.

As always with Osmo the pieces are high quality and cute and well packaged. I wouldn't expect any less for the price point but good to be reassured that they are still making a good product.

T.L.
4.0 颗星，最多 5 颗星 Little Genius Starter Kit, fun games and lots of learning
2019年8月28日 - 已在美国亚马逊上发表
免费商品的 Vine 买家评论( 这是什么？ )已确认购买
I'm a huge fan of the Osmo ecosystem. Our son loves the different games and we have the bases for multiple platforms from other kits we've bought over the years (Kindle Fire, IPad). This particular kit is brand new, includes an IPad base, includes silicon shapes, and costume pieces for use with the associated games. It was neat to read they partnered with Marbotic, a French company, as I've used their Smart Numbers and Smart Letters product / games with my IPad previously and really love them for learning.

The materials themselves seem high quality and the silicon pieces do not seem the sort to easily break from heavy use. The costume pieces are varied and the mat you place things on is made of a nice material.

As for the games themselves they seem alright:

ABCs (4/5): You are shown letters which you then can create using the silicon pieces. The letters shown have colors so it's pretty straightforward for figuring out the best pieces to use once kids get the hang of it. My three year old had fun doing this and was able to make the letters pretty easily without issue. If you get the letter close to what it looks like the avatar gets excited and tells you that looks good but if you fail it only gives you a generic message. I guess the intent is to enforce the good and not punish the negative but once my son realized he could put anything there his mischievous side surfaced and he stopped following the directions creating all sorts of random shapes laughing his head off. I still think it's a good game but I wish it had better structure for showing the correct representation or some form of grading for how close he is so he can strive for a goal there.

Squiggle Magic (5/5): This game reminds me of the creative games Osmo has. You can make pretty much anything using the silicon pieces and it'll be treated like the item you were asked to make. I think this is a positive here as this app is more about self expression than meeting some defined goal (like the letters above). You're given tasks to accomplish which, after doing a certain number, unlock new areas to head to. One for example was some underwater area and tasked my son with creating lots of creatures which moved around somewhat after they were added. My son, of course, went mischievous mode and created all sorts of sea life abominations but he did so with a big grin and lots of laughter so I think it was a huge success here.

Costume Party (3/5): Another neat game. You dress characters up for a party and can configure colors, etc. My son wasn't really interested in this game as he found the others to be more involved. Personally I feel like this game may have been added to justify the addition of the costume pieces as perhaps they felt the stories app wasn't enough of a use case. The stories app is the place where the dress up is of more use.

Stories (4/5): Stories is an interesting game as you are tasked with helping your character through some struggles they encounter in a given narrative. One story for example required the use of the boat feet costume piece to cross some water. Other interactions involve both placing the clothing piece down and then touching some aspect of it on the app itself to trigger its response. For example you may be required to scare something away so you go grab the helmet with a cat on top, put it as your characters hat, and then single tap the cat to activate it. I feel it encourages creativity and problem solving skills. The costumes are pretty varied as well which is nice. My only dislike about the app was that sometimes it felt a bit slow with the transitions between each task.

In general my 3 year old loved the little kit and I wasn't disappointed by it. I do feel like the older kid genius kit comes with more value for what you spend but I don't feel ripped off either. I feel like it's a solid kit that would be a definite recommendation if they could find additional uses for the pieces here and if they improve on some of the experiences in the apps themselves. I'd recommend it if you are looking for an entry into the Osmo ecosystem though as it's a good place to start with kids.
阅读更多
36 个人发现此评论有用

Amazon Customer
5.0 颗星，最多 5 颗星 Get this now-it’s fun for the whole family!
2019年7月28日 - 已在美国亚马逊上发表
已确认购买
This product is a lifesaver! The little ones can be endlessly entertained and I don’t feel guilty because they are learning! We haven’t turned the T.V. on once since we got this. I am looking forward to taking this with us to grandma’s house and on plane trips. The portability factor is really great! Quality and design of all the game pieces is very high. My husband is really impressed with the graphics. This is now my go-to gift for all the littles in my life!
阅读更多
35 个人发现此评论有用

Laura Liebman
5.0 颗星，最多 5 颗星 Osmo for the younger kids
2019年7月29日 - 已在美国亚马逊上发表
已确认购买
Got this for my 4 year old niece who is glued to her iPad. I wanted her to have a more active way to play with it. Osmo's Little Genius fits the bill. So far she's loving the squiggles and ABC games, and I like that it takes action OFF the screen to play. Also nice that it kinda bridges a gap between kiddo's desire to draw/write and the fined tuned motor skills necessary to do so that don't come along til later. The pieces all seem well constructed and durable. Just a matter of keeping them in the little containers Osmo provides.
阅读更多
29 个人发现此评论有用
加入亚马逊Prime，从此免运费
亚马逊Prime会员可享海外购美/英/日/德跨境免邮，全年无限次！更有免费无限次阅读电子书服务
> 立即加入
了解我们
合作信息
帮助中心和购物指南