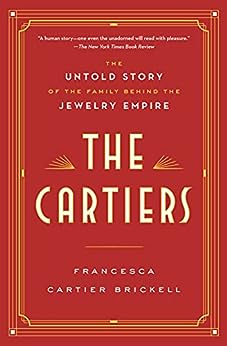 The Cartiers: The Untold Story of the Family Behind the Jewelry Empire (English Edition) Kindle电子书

The Cartiers is the revealing tale of a jewelry dynasty—four generations, from revolutionary France to the 1970s. At its heart are the three Cartier brothers whose motto was “Never copy, only create” and who made their family firm internationally famous in the early days of the twentieth century, thanks to their unique and complementary talents: Louis, the visionary designer who created the first men’s wristwatch to help an aviator friend tell the time without taking his hands off the controls of his flying machine; Pierre, the master dealmaker who bought the New York headquarters on Fifth Avenue for a double-stranded natural pearl necklace; and Jacques, the globe-trotting gemstone expert whose travels to India gave Cartier access to the world’s best rubies, emeralds, and sapphires, inspiring the celebrated Tutti Frutti jewelry.

Francesca Cartier Brickell, whose great-grandfather was the youngest of the brothers, has traveled the world researching her family’s history, tracking down those connected with her ancestors and discovering long-lost pieces of the puzzle along the way. Now she reveals never-before-told dramas, romances, intrigues, betrayals, and more.

The Cartiers also offers a behind-the-scenes look at the firm’s most iconic jewelry—the notoriously cursed Hope Diamond, the Romanov emeralds, the classic panther pieces—and the long line of stars from the worlds of fashion, film, and royalty who wore them, from Indian maharajas and Russian grand duchesses to Wallis Simpson, Coco Chanel, and Elizabeth Taylor.

Published in the two-hundredth anniversary year of the birth of the dynasty’s founder, Louis-François Cartier, this book is a magnificent, definitive, epic social history shown through the deeply personal lens of one legendary family.
阅读更多
Previous page
Next page
由于文件较大，下载时间可能较长。
›  查看更多商品促销信息

Laura Stout
5.0 颗星，最多 5 颗星 A joy to read!
2023年1月26日 - 已在美国亚马逊上发表
已确认购买
The reader gets comprehensive information not only about the famous jewelry business, but also about what was happening around the world through the decades that Cartier was owned and managed by the three Cartier brothers, and how these events impacted society in three different countries.
阅读更多

Amazon Customer
5.0 颗星，最多 5 颗星 This book is fab. Highly recommend it.
2022年12月7日 - 已在美国亚马逊上发表
已确认购买
Great insight into the history of the Cartier eras through the lens of jewelry. I'm sorry it had to end :(
阅读更多

D. Scott Tjaden
5.0 颗星，最多 5 颗星 A book for everyone interested in history, business and beauty.
2019年12月20日 - 已在美国亚马逊上发表
已确认购买
This book is really brilliant. It isn’t a picture book like a coffee-table book First of all, if you’re a reader, 600+ pages is not really a long book for what it covers; which is why it took 10 years to write. It’s filled with comprehensive, authenticated information from access that a writer/biographer wouldn’t normally have access It really is a story about the process to create a successful. Hard work and perseverance through bad times such as the first- and second-world war. Diplomatic relationships between owner and consumer. Creating a product that kept its relevancy over 150 years. I loved the inclusion of family thoughts as it gave the book personality. These relationships affect everything in any family business. I think the three brothers did an excellent job in identifying strengths (both staff and themselves), creating teams of experts. To see an earring design out of the curve of a vase or to see a color combination from a historic object without copying is astonishing. Buy this book not just for the allure of the beautiful objects, but because it covers a lot of business principles and clever deal-making which was the key behind their enduring legacy in history.
阅读更多
26 个人发现此评论有用