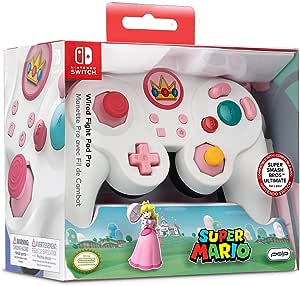 Pick your favorite character and challenge your friends (and enemies!) with this GameCube inspired Pro Controller.

Customize your gaming style by playing with the traditional C-Stick or swap it out for a full-size stick with the innovative detachable design.

The 10 foot USB cable gives you plenty of room to play and ensures you stay connected during crucial battle moments.

Ed W.
2.0 颗星，最多 5 颗星 Great controller for the price point - beware of random input defect
2019年1月4日 - 已在美国亚马逊上发表
已确认购买
UPDATE: Was playing locally with my brother and after having him use the controller we both were able to confirm the random input issue when using the left stick. It seems during quick movement like other reviews suggested, sometimes it will throw a B or A input in. I am contacting support to see if I can resolve without a return. If you purchase I recommend you thoroughly test the controller to ensure you aren't left with a defective controller past the return date.

Really like the feel and grip of the controller. I just got it today so I need to adjust but I like how it feels so far. The triggers were a main selling point, and the overall look of it is a definite plus.

Right now I'm testing out the control stick piece on the C stick. I'm getting the "random button inputs while playing smash" issue others are reporting. I experienced it on my first quick play match online. I hopped into training mode to test for a while. I think the issue may be that I'm bumping the right stick on accident since I made it bigger with replacement. I will keep testing, and give it a 5 once I confirm it's just me. My right stick controls are for tilt attacks, I'll disable it completely and continue to test for input issues.

I don't know if others mentioned it or not, but using a side port of the dock I'm able to power on the console with the home button for only a short time after the switch went to sleep. But after more time waiting then trying, the home button did nothing. Not a huge deal.

It feels just like a GCN controller made by Nintendo, and enhancing and the original design for today's use. I would recommend giving it a try.

Not unplayable, but can mess up games and cause frustration

EDIT: I redact my statement, seems to be happening more often. Is unplayable. Waste of $25
EDIT: EDIT: Not a waste. Just seems to have a programming/electrical glitch when using other USB slots. Changed to 4 stars. Swappable thumbstick and button triggers are cool
阅读更多
13 个人发现此评论有用

This controller is super cute! Looks exactly like the pictures online. I bought this controller because the joycon that came with my (pre-owned) switch were malfunctioning and I needed a quick and cheap replacement. All of the buttons work well, none of them stick when pressed like a lot of 3rd party controllers do. The control sticks work perfectly, there’s no ghosting at all. I tested this controller right out of the box and it worked as soon as it was plugged into the switch, no communication issues. Was tested for ~1 hour on Mario Kart 8 Deluxe.

Cons:
-No vibration
-No motion controls
-Cannot be used in handheld mode
-No NFC/Amiibo reader

The pro/con list is mostly up to preference, I don’t care enough about having vibration or motion controls for it to be a deal breaker for me.
All in all, this controller works exactly for what it's intended for. I’m super pleased with this purchase and would definitely order this brand of controller again in the future :)
Will update this review if any issues pop up with further use!
阅读更多

David Ellis
3.0 颗星，最多 5 颗星 Check full review already updated.
2019年9月27日 - 已在美国亚马逊上发表
已确认购买
I'm making this early review (because I don't have anything better to do) and I will update it depending on the performance of the controller in the next weeks.

Starting this controller is NOT A GAMECUBE CONTROLLER! Is a Gamecube style controller, the quality will feel different, also the buttons specially the triggers, you will have to use the controller to get use to it.

I tried this controller using my switch, in all 3 port the controller felt fine and the issue (read on other reviews) about the left stick randomly sending button inputs when "wave dashing" does not seem present on this controller.

The overall quality of the plastic of the controller is good, the shell plastic feels fine not to cheap and not to good but it gets discoloration scratches really easy because it has like a shiny coat on the plastic, you can even scratch this shiny coat with your fingernail, this is in the sonic model other might be different.
The button plastic (A/B/Y/X) feels great compare with the shell, not as good as a real GC controller but almost.
The bumpers, "triggers" (because the triggers are another set of bumpers to be pressed on an angle) and D-PAD feels like the shell, not as good as the buttons but are decent.
The Analog sticks feels AWESOME in terms of quality, Both of then can be changed to a C-stick which is a nice touch, just wished that they include different sticks or at least 2 C sticks to change them both and have different configuration options.

Now using the buttons feels like they have a little of traveling distance for the input to be send, this includes the bumpers and the triggers, hope this gets soft with usage.
The D-PAD (if I'm not wrong) is smaller than the one on the gamecube, I have big fingers so using this D-PAD for fighting games would be hard, sticking to use it on smash tho.
The sticks (if im not wrong) fell bigger than the one on gamecube so in order to go a full press you will have more travel distance but they dont feel bad at all.

I tried this controller for a little while and dont seems bad... I will further test it and come back with a full review.

UPDATE!: SO after extensive use (Playing SSBU) I can detect some issues, which they are not only made by PDP, nintendo has fault in them as well, I dont understand how they can License this controllers if they dont work properly with their console.

1. The controller has random lag sometimes when connected to the inside port of the dock.

2. This only happens when a GC adaptor is also connected to the dock, random inputs, I dont have this issue when playing alone, but when someone connects a GC adaptor some times it has an "A" or some of the triggers (L or R or ZR or ZL) input, leading to SD or to getting punish when playing, I think that is because the dock or the charger cant handle the energy distribution between 3 usb ports been used for 5 controllers. This is PDP nintendos fault, if they fix this this controller would be PERFECT.

My recommendation is, if you are planning on playing Smash competitive, buy a GC controller, if not then you can buy this, but there is better options.
阅读更多
4 个人发现此评论有用
加入亚马逊Prime，从此免运费
亚马逊Prime会员可享海外购美/英/日/德跨境免邮，全年无限次！更有免费无限次阅读电子书服务
> 立即加入
了解我们
合作信息
帮助中心和购物指南