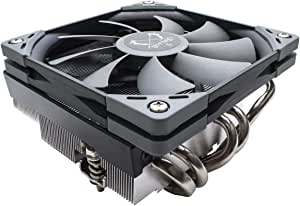 Personally I'm still too paranoid to make the jump to water cooling...and popping in an air cooler seems easier to me in a small build. Plus I had recently started taking interest in slim cases like the Silverstone FTZ01E and the Nouvolo Steck.

My previous build included a Cryorig C1 on an ATX motherboard in a mid tower case. And I was hoping I'd be able to use this big 140mm ITX cooler in a new ITX build. However after some research and testing...the heatsink was just too large for the cases I was looking at. Either Ram clearance became an issue on the ITX boards, or the heatsink would press up against the sides of cases.

I looked at other options for large 140 and 120mm low profile coolers with decent sized heatsinks, but was finding there would be compatibility issues...or lackluster cooling. I checked at a ton of builds on PCpartpicker, Youtube, and different tech forums. I looked over the offerings from Raijintek, Be Quiet, Thermalright, Noctua, you name it.

Then I saw that Scythe came out with the Big Shuriken 3 and it supported AM4 sockets...and I was intrigued. Their claims of total ram compatibility, low cooler height, and good cooling performance had me excited. So I looked at a few reviews on Youtube, read an article or two, then I ordered it.

Tested this baby out on an ASUS B450 ITX motherboard with Gskill TridentZ ram inside a Silverstone FTZ01E case. Absolutely zero issues fitting. The cooler was made in a way, that when oriented with the heatpipe bends pointing up, the cooler overhangs your rear I/O. So tall ram like the TridentZ are 100% compatible.

Cooling was pretty dang good...keeping my 2700X CPU at around 45c idle, 79c at full load in the second floor of a rather warm home. Thats a few degrees cooler than the beefier Cryorig that I previously used. Mind you the Cryorig was a 140mm cooler that was a tad heavier than the Scythe, and also had an extra heatpipe. Yet somehow the Scythe beat it.

And the Scythe fan noise isnt too bad...but I prefer Noctua...so I swapped in a 120mm slim fan from them (cooling performance was the same). All in all, the Big Shuriken 3 is a well performing, highly compatible CPU cooler thats worth a look at. I could really see this thing becoming a popular choice in the ITX & SFF community. Ill try to share some pics at a later date.

PS - Scythe customer service is also great. I had a small issue with the plastic spacers for the mounting bracket being too tight...and they sent me replacements free of charge. Definitely made installation and removal much easier.
阅读更多
20 个人发现此评论有用

MS
5.0 颗星，最多 5 颗星 With a swapped out fan, it's the SFF king!
2019年4月20日 - 已在美国亚马逊上发表
已确认购买
This thing is awesome for small itx builds. It can get a little noisey though. After putting in an sfx PSU in a Silverstone sg13 case I had an extra 20mm from the 62mm clearance I had when there was an ATX PSU in there. So I have enough room for this cooler plus a regular 25mm thick fan instead of the 15mm fan this cooler came with. I slapped a noctua 120mm industrial ippc high static fan on it and decreased my load temps by 5c. Ryzen 1600, slightly undervolted by 0.0325, runs at a cool 63c under load. Even my vrm temps went down by 4-6c. The noctua fan maxes out at 2000 rpm but I never need it to go over 1600. So it cools and keeps the noise down. The bonus was that the scythe fan was the perfect size to tightly wedge between the top frame and the PSU on the right side of the case for exhaust. I keep it running around 45-65 percent to keep the noise down and also balance out the 120mm cougar 3 pin fan I have for intake in the front. Since it's a 3 pin and I had to use the aio pump fan port on my motherboard, that fan is running at 100 percent, 1700rpm all the time and is the loudest fan in the case. I'll eventually swap it out with a 140mm noctua chromax down the road. My budget build mini gaming rig consists of:

I would not hesitate to buy this beefy low profile gem again. Although it does an admirable job with the stock fan, if you have the clearance for a thicker fan, it's a no-brainer.

Update:
Swapped out the fan yet again with the noctua nf-a12(new version) based on a youtube low profile air cooler showdown. Also swapped out the exhaust scype fan for the noctua nf-a12 120mm x 15mm fan. Few degrees cooler now and much, much more quiet. I can't say enough about the BS3 fin stack. Just awesome.
阅读更多
13 个人发现此评论有用

ALEN
5.0 颗星，最多 5 颗星 Easily the best low profile cooler as of now.
2019年3月7日 - 已在美国亚马逊上发表
已确认购买
This particular cooler really helps a lot in situations where you also want to cool down the VRMs on the motherboard. In this case, for an GAAB350N from gigabyte, paired with an 2700x it really helps. Note that I run the processor with stock frequencies, but with an undervolt of around 0.11v. Results are great for a cooler for this type reaching 74 Celsius. Please note also that this cooler does include screws for a 25mm by 120mm fan.
阅读更多

Mark
5.0 颗星，最多 5 颗星 Will be buying another for my second rig
2019年8月1日 - 已在美国亚马逊上发表
已确认购买
Excellent product. For my Ryzen 5 2600x, the Big Shuriken 3 is a significant upgrade from the stock Wraith Spire Cooler, which was good for a stock cooler, but sadly still not quite enough. My rig is based in an EVGA Hadron Air, so ventilation, no matter what you do, is limited. Went from running steady idle temps (with panel closed) in the mid 50s, down to the high low 40s. May not sound like a lot, but any reduction in temps is a piece of mind for me, especially with such limited ventilation.
阅读更多