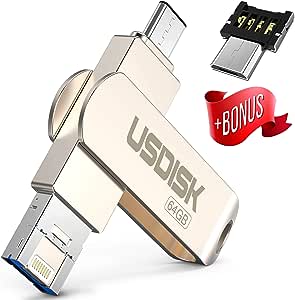 J. Lawrence
3.0 颗星，最多 5 颗星 Absence of a hardware manual
2019年6月25日 - 已在美国亚马逊上发表
颜色: 64GB已确认购买
Received the device today and was anxious to try it out. The paper “manual” that accompanied the device, and the manual shown in the app, is for the app only, and not the actual hardware. Differently stated, there was no documentation about what is what in this small device with four connectors (including what turned out to be the android connector, and shown as a “bonus” item. So I looked at the device and saw the type c connector and the usb connector on the opposite side. What I did not notice was that the usb side had a little hinge which allowed a 90 degree swivel, opening up the lightening connector. Not having noticed that, I began my comedy of errors by taking that little bonus item (which I had not yet identified as an android connector, since I don’t have an android device) and plugged it in (it was a tight fit, but went in snugly), and it, of course, did not plug into my iPad, and it was only then that I noticed the little hinge, which, when swiveled, showed the lightening connector. Ok, felt good,....so I plugged it into the iPad and the app (which I had previously installed) opened up, and with some exploration, I found the files on my iPad and saw how I could copy them onto the flash device. Neat! It even had a player/viewer in the app so I could display pictures and videos, and play music. Pretty cool! So I disconnected the flash device and it was then that I noticed that the little bonus android connector blocked the USB port on the device. Ok, pull it out, I thought. And I tried,...and tried,. ..and tried. No luck. So I found amazon support on the page showing this order, and called them. Someone did the call back I requested, and I got as far as explaining the problem, and the line went dead. So I did the chat that was offered. Type the problem explanation to one person, and he transferred me to another person, who told me to call the manufacturer support. Couldn’t find that on the amazon page displaying this item for sale. So I looked again at the device, shone a flashlight on that small android end, and realized that I had not been pulling in it correctly, and with one final pull, it came loose. I could finally see that the little hinge in the usb end allowed a 90 degree swivel that allowed the usb casing to get out of the way so that the lightening connector was available for use. Maybe I’m not as smart as some of you folks reading this, but some little piece of paper with a picture, or a sentence or two explaining the hardware, would have helped someone like me save an hour of my time. Now that I have this figured out, maybe the item deserves that fourth star, and maybe even 5 stars. But when I started all this, I was not in a generous mood.
阅读更多
8 个人发现此评论有用

Pros:
I can use this device on all of my devices.
For work, I have a Win 7 PC laptop with traditional USB and a USB-C ports so it doesn’t matter which port is free, I can use this.
For personal, I have a Mac mini which only has traditional USB ports and a MacBook Pro that only has USB-C ports, I can use this to transfer data between the two devices.
I have an iPhone X and an iPad Pro with lightning connectors and I can attach the device to both of those.
It has a 64GB storage capacity.

Cons:
None found yet.

I will be attaching this to my keys and only using this USB drive moving forward. I definitely recommend to anyone looking for a new versatile USB drive

Karin
2.0 颗星，最多 5 颗星 file folder is empty
2019年6月21日 - 已在美国亚马逊上发表
颜色: 64GB已确认购买
I'll assign a 2 since I'm still trying to get my photo's to download to the flash drive and will give it the benefit of the doubt. When attached to my Iphone, I selected photo's and it appeared they were successfully transferred to the flashdrive file folder; however, when I attach to my pc's usb port it says there's nothing in the file folder. I'll keep trying different things. Sure hope I can get it to work. I've tried absolutely everything to download photo's to my pc with my usb cable but it will ONLY let me choose photo's that were supposedly not previously downloaded. It used to be so easy but not so anymore. No luck so my last hope is this flashdrive to store 3 years of lost photo's on my computer. I tried every conceivable solution found on the i/n. I know iphone and pc interface can be problematic but surely not impossible. I'll report in later if I can get this flashdrive to work.
阅读更多
4 个人发现此评论有用

R Magar
5.0 颗星，最多 5 颗星 Works Great with iPhone and Mac, Fast, Portable, Durable and Premium Design
2019年4月27日 - 已在美国亚马逊上发表
颜色: 64GB已确认购买
It works great with iPhone and Mac Computer. Lightning, Type C, and USB 3, all works great. It is also fast, portable and premium design. The metal design is great and looks premium quality material. It's small, lightweight, and can be carried with the key ring. You need to download an app from the Apple iOS store to use this flash drive. The only this I didn't like it the adapter that you may lose some point. I wish I could stick the adapter with the drive and keep together. Overall, great value for money, easy to use, and works great.
阅读更多
3 个人发现此评论有用
加入亚马逊Prime，从此免运费
亚马逊Prime会员可享海外购美/英/日/德跨境免邮，全年无限次！更有免费无限次阅读电子书服务
> 立即加入
了解我们
合作信息
支付方式
帮助中心和购物指南