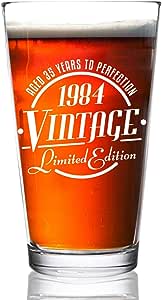 Rook
5.0 颗星，最多 5 颗星 Printing seems fine, glass seems fine... but not "thick" at all as reported in other reviews.
2019年11月27日 - 已在美国亚马逊上发表
颜色: 35th Vintage Beer 2019已确认购买
I bought this and another pint glass with a similar design, both claimed by reviewers to be thick or durable in some notable way. It's not. This is exactly as bog-standard as any normal pint glass I've ever used or owned, matching every other one I have currently and definitely not "thick" like the old one I just dropped the other day, prompting this hopeful purchase. For reference, the truly thick one I had was an old one from a restaurant, probably 15 years back, and was just about double the thickness in the walls and the height of the base, also extending the base even further down around the rim, ramping in towards the concave center. No idea if anyone makes them like that any more, but it was a tank, though nothing escapes the harsh mistress of gravity when lady luck is out of the house.

Not deducting any stars as the seller made no claims to this being anything unusually robust, in either composition or size, and this is a nice normal glass with a cool little print on it, living up to what it was claimed to be.