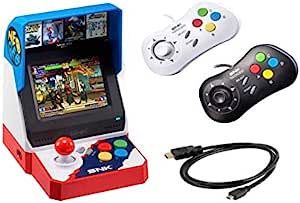 Andrew J. Holland
2.0 颗星，最多 5 颗星 Low res on an HDTV, not the arcade ports
2020年7月23日 - 已在美国亚马逊上发表
已确认购买
I'm a big retro gaming fan. I grew up in the 80s and early 90s at a time the Neo-Geo cabinets were a mainstay in local arcades. Because this product is shaped like an arcade machine, you'd be forgiven for thinking it housed the arcade versions of the titles. You'd be wrong. They're the home ports with limited lives and continues. Good luck with Metal Slug! Despite coming with an HDMI cable, these games look horrible on a modern TV. They image isn't crisp or clear. You can turn on a smoothing feature, but it's the only filter you'll get. Whereas the NES mini, SNES mini, Genesis mini and TG-16 minis I have all output in HDMI with brilliantly clear, crisp images with the aid of multiple filter options, this device has none of that going for it. Which is a real shame, because compilation releases from the PS3 era on up and all of Hamster's excellent Neo-Geo ports look fantastic in HD. Even worse is the fact that if you're willing to mod your mini and void its warranty, you can install an OS that correctly outputs these titles to look stunning on a modern TV. Why Neo-Geo didn't feel this necessary is beyond me. I found the button configuration of the unit a pain, especially where the action button is placed during the many shooter titles. The arcade cabinet itself is pretty boring to look at, even with the included stickers, and the simplistic menu navigation feels super barebones and cheap, especially in light of the fantastic menus on all the other mini consoles I mentioned. On the plus side, because of the horrible image quality, you're getting a solid approximation of what these games must have looked like on a regular TV back in the day. I wouldn't know, affording a Neo-Geo was never in the cards.

Some positives. For the amount of titles and the included controllers, it's a bargain at 70 bucks. Know going in these are the home ports and that video output is abysmal, but it's a good roster with excellent emulation. These titles sell separately for 8 bucks on modern storefronts, so this is a good deal. The video output seems like an easy fix if hackers have already managed to solve the issue, but the build quality is excellent and it's all packaged very well.

I wanted to love this item. Neo-Geo titles stand the test of time quite well. But I couldn't look past the horrible video quality and credit it as the biggest reason for my low score.

AJ
4.0 颗星，最多 5 颗星 PSA: This is NOT the Japanese NeoGeo Mini
2019年5月31日 - 已在美国亚马逊上发表
已确认购买
It is the USA NeoGeo Mini International rerelease in a Japanese shell, the same product as the USA version bundle listed on Amazon.

I ended up hacking mine as since the hack is based off the Japanese firmware, it adds that set of 40 games (14 different games and others containing uncensored blood n' bouncin), along with tons of additional games from the arcade and even home consoles. To save you some time, only the arcade games run well (love that the hack restored Neo Turf Masters and Baseball Stars 2!). The console games all run terribly with horrendous sound, and thus should never be played. Overall, I highly recommend the NeoGeo Mini, but buyer beware that both bundles on Amazon are the same.