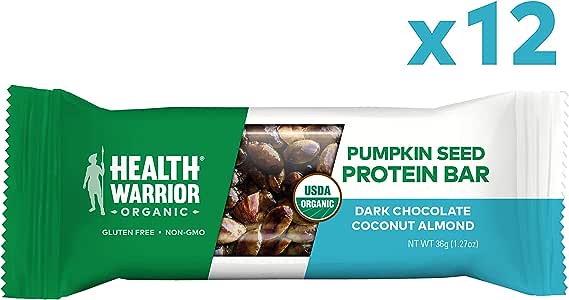 Just coconut nectar, spices and one of the best plant-based sources of protein on the planet, pumpkin seeds, this bar has our simplest ingredient list yet. Now USDA Certified Organic!

NY to VA
5.0 颗星，最多 5 颗星 Delicious + Short Ingredient List
2017年3月30日 - 已在美国亚马逊上发表
已确认购买
Having tried both the cinnamon and the dark chocolate flavors of these bars, I love them both, though personally slightly prefer the chocolate. The nutrient profile is good (170 calories/7g sugar/8g protein) plus packed with magnesium and other nutrients since the bars are just pumpkin seeds plus honey and spices. The texture is pretty soft and chewy, which I prefer to some of the brick-like bars out there. Image attached of the ingredient/nutrient lists for each of the 3 flavors below (source for the images is Health Warrior's website). I will warn that the cinnamon bar has a pretty strong cinnamon/all-spice flavor, so if you're neutral or not big on cinnamon, you might want to go with a different flavor. Definitely recommended!
阅读更多

Jane
5.0 颗星，最多 5 颗星 The Cinnamon Spice flavor is worth its weight in silver!
2018年9月13日 - 已在美国亚马逊上发表
已确认购买
I recently tried the chocolate flavor and it was ok, but not spectacular, so this time I decided to give the cinnamon spice flavor a whirl. I just happened to receive them today when I was hungry and in need of a snack, STAT, so I immediately opened them up and gave them a taste test, along with my 3-year old assistant taste tester. Oh my goodness, let me tell you, these are the best snack bars I have had in a long time, if not ever! If you are a fan of cinnamon or "pumpkin spice" flavored things or chai, these are for you. The cinnamon is very, very prominent in these bars and they also have ginger and allspice in them, so they have lots of flavor and a little bit of kick, but not so much that my 3-year old didn't keep asking for more bites. The pumpkin seeds really compliment the spice combination used here and the sweetness is not overwhelming, although I do feel it could be a touch less sweet and still be yummy. The ingredient list on these is short and every ingredient is recognizable, which I like. Even though I just got a box today, I'm already ordering another box of this flavor because I don't want to run out.
阅读更多
25 个人发现此评论有用

TexasG
5.0 颗星，最多 5 颗星 Wonderfully Chewy and Delicious
2017年9月3日 - 已在美国亚马逊上发表
已确认购买
These Pumpkin Seed Dark Chocolate Bars are the third product I have tried by Health Warrior. They are deliciously chewy, only barely sweet with the chocolate, and make a wonderfully healthy snack any time of day. If my children were still small, I would stock my house with these and never let them eat sugar!
阅读更多

Madison
1.0 颗星，最多 5 颗星 Rancid seeds and taste of mildew
2019年12月4日 - 已在美国亚马逊上发表
已确认购买
We bought the product because it looked so healthy. Two people in the house tried it out. Many of the seeds were rancid and there was a taste of mildew. One person was sick after eating for 3 days, and the other for one night. We called the manufacturer to discover where they got their ingredients. They refused to say. The woman said the ingredients come from many different countries. She said repeatedly she could not give the info of where the ingredients were from. We asked her to check with someone who could. After waiting a long time she came back and said they didn't have the information but if we'd like to give her some personal information and a phone number, someone might contact us. We asked when that would be. She said "maybe within 6 weeks if they have the information." We declined to give our personal info and decided to write this review instead so others won't be affected similarly.
阅读更多
13 个人发现此评论有用

Mauricio Perez
5.0 颗星，最多 5 颗星 Extremely delicious
2017年11月3日 - 已在美国亚马逊上发表
已确认购买
Bitting into it, it’s very smooth, almost a creamy feel to it but still a nice crunch you would want. As you chew the suprisingly soft bar, you get a pleasant taste of chocolate with a sweet honey undertone. If you want a tasty but light snack in between meals I would recommend you try these.
阅读更多
25 个人发现此评论有用
加入亚马逊Prime，从此免运费
亚马逊Prime会员可享海外购美/英/日/德跨境免邮，全年无限次！更有免费无限次阅读电子书服务
> 立即加入
了解我们
合作信息
帮助中心和购物指南