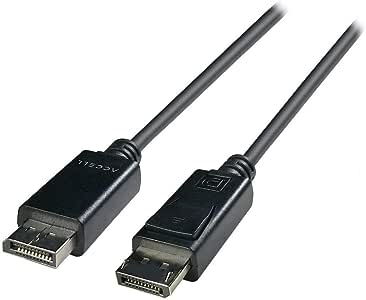 Christopher
1.0 颗星，最多 5 颗星 2nd cable after 1st died in under a year. BEWARE
2017年8月9日 - 已在美国亚马逊上发表
已确认购买
I'm currently on my second of these cables and am not incredibly happy at the moment. My first cable happened to fizzle out a few days ago during that nonsense creators update from Microsoft. At first I was unsure of weather or not it was software or hardware related when my screen stopped working on any display port on my GPU. After quite a bit of headaches I decided to start trying to find a hardware solution, so I bought a new cable to test that first. Lo and behold, my problem is solved now. This tells me that the first cable fizzled out after less than a year of use which is absurd for such an expensive cable. The only reason I ever bought this cable in the first place was due to other, cheaper displayport cables causing flickering on my monitor (which after some searching I found was a common issue with cheap cables that are not VESA certified) I might post an updated review if this one actually lasts a decent amount of time, but for now I can't recommend this product.
阅读更多
14 个人发现此评论有用

Slayer3235
5.0 颗星，最多 5 颗星 Screen stopped flickering! YAY!
2017年2月21日 - 已在美国亚马逊上发表
已确认购买
I have an Asus ROG PG278Q, 1440P 144Hz screen, and apparently the cable I was using was not able to work with the newer card (although it worked fine with an old 770GTX) Switched to a 1070 GTX last week and had issues with the screen flickering which I eventually tracked down to a detection issue; Nvidia Control panel refused to see the correct model of this screen (second different model was fine), and the G-Sync kept enabling and disabling itself, causing the screen to flash. Along with this, the refresh rate kept lowering to 85Hz.

Quick Google search confirmed and told me to replace cable, reviews led me to this cable. I got my screen second hand so I was given a random displayport cable, which has worked perfectly fine for the past 2 years, until now. Swtiched to this cable, works perfectly fine. Don't buy a cheap cable. Spend the extra $8-10 compared to the other cables out there and get one that is certified. There is a difference, which is the first time I've been able to say that confidently. I've been a computer tech for a bit over 3 years, and have never encountered this issue before (granted the high majority of people still rock 1080P).

Cable also supports 4k @ 60Hz, with a lifetime replacement warranty. It is much thicker then my previous cable, and doesn't flex nearly as much. However, you know by the feel that you got a durable cable that will last you quite a long time. Would highly recommend for anyone running above 1080P, regardless of your refresh rate.

Madscientist
5.0 颗星，最多 5 颗星 Will run 1440p and 144 hz!! Get this instead of the Cable Matters junk
2015年8月17日 - 已在美国亚马逊上发表
已确认购买
This cable actually is able to run my new ACER XB270HU at 1440p and 144 hz, I had previously bought a Cable Matters® Gold Plated DisplayPort to DisplayPort Cable 10 Feet - 4K Resolution Ready, Item model number: 102005-10 that was not able to push past 85 hz. This cable is one of the verified DisplayPort Cables that will actually transmit at the required data rates (check out displayport.org for more options).
Hope this helps others not get a crappy cable.