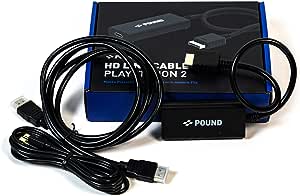 Amazon Customer
2.0 颗星，最多 5 颗星 Id pass on this
2018年11月27日 - 已在美国亚马逊上发表
样式: PS2 & PS1 専用已确认购买
This ps2 hdmi is way better than the generic ones you see usually, but this cable uses rgb instead of component so the picture is way softer than component & lacks 480p which makes games look way better. When using this, the device defualts to a full screen, my 60 inch tv was full no letterbox in site & personally im on the fence about it, it can be changed if your tv has the picture settings to do so. All in all id wait on another product, as like with the other cables this comapny has produced, better cables are to come from others.
阅读更多

2.0 颗星，最多 5 颗星 Id pass on this
2018年11月27日 在美国审核
This ps2 hdmi is way better than the generic ones you see usually, but this cable uses rgb instead of component so the picture is way softer than component & lacks 480p which makes games look way better. When using this, the device defualts to a full screen, my 60 inch tv was full no letterbox in site & personally im on the fence about it, it can be changed if your tv has the picture settings to do so. All in all id wait on another product, as like with the other cables this comapny has produced, better cables are to come from others.
该评价的图片

V. Hase
3.0 颗星，最多 5 颗星 Its ... Okay.
2018年12月2日 - 已在美国亚马逊上发表
样式: PS2 & PS1 専用已确认购买
I use an inexpensive upscaler box, purchased here on Amazon, to get my PS2 Slim signal to my television (https://www.amazon.com/gp/product/B019T0WFA4/) - About $40 dollars. I use a Sony S-Video cable to the unit, and it allows me to play both PS2 and PSone games. This is ALREADY technically a compromise, but one I'm happy to make to allow PSone games to be played, as well (normal HDMI converter/HDTV combo usually can't play PSone - they can't handle the low, 240p resolution - You get a black screen).

This cable offers a lower quality image than my current setup. It falls well above the lower end of standard composite, but just below the higher end of S-Video - Understand, both of those are well below component or digital. My upscaler provides much sharper text and cleaner blacks and brighter picture. However, to be fair, this cable beats the HECK out of just using the standard composite video in (if your TV still supports it).

Also to be fair - It's not the job of this company to offer a widescreen switch option - the PS2 itself has no such option: If you put your PS2 into 16:9 mode, it automatically shows compatible games in widescreen, AND STRETCHES GAMES that don't have the option. That's standard operation for the system. Good retro-gamers make sure their TV has a 4:3 option. =)

Lastly - this cable will be a matter of taste. Quite frankly, PS2 and PSone games look really bad when you upscale them to 720 or 1080, and show them crisp and clean - their low-resolution jagged-edges look painful all cleaned up. It's not like a cute image of a blocky Mario from the days of the NES - It's low-resolution, really jagged, very few polygon, 3D environments - The softer picture may actually be a plus for you - It's like firing up an emulator on your computer and applying a filter. After all, these two systems were created when most people still had picture-tube televisions - they were pretty fuzzy, themselves.

In the end, I'm keeping the cable, even though I'll not be using it - It's good to have in the video game drawer if I want to quickly hook up my original Playstation - or if my upscaler box goes down - It IS very easy to use, comes with all the needed cables, and does, indeed, produce a workable image. It's just not the BEST image. In fact, if you have ONLY the original Playstation, this is actually very good option for that system.

SystemBug
5.0 颗星，最多 5 颗星 Awesome HDMI Link Cable for PS1
2018年12月2日 - 已在美国亚马逊上发表
样式: PS2 & PS1 専用已确认购买
I used the cable for PS1 not PS2. First all, the picture is really awesome to me. Compare with AV output, it fit the widescreen perfectly. It looks clear and sharper than av output.

1. The plug into PS1 is too tight.
2. USB power requirement cause I need to unplug USB from converter every time I turn off console to turn it off, since PS1 doesn't have USB port.
阅读更多
25 个人发现此评论有用

Paulo Santos Alves
5.0 颗星，最多 5 颗星 Works very well with my PS1 - Better than other av to hdmi converters!
2018年12月16日 - 已在美国亚马逊上发表
样式: PS2 & PS1 専用已确认购买
I tested this little fella against another converter to HDMI I had purchased, the KanexPro - which costs close to $100 if you bought an AV cable like I did. This product by pound, at only $30, produced a FAR SUPERIOR image that the KanexPro.

I tested an Original PS1 with Silent Hill 1 - even just the menus and the game intro sequence are good enough to give you an idea of what the game will look like. Though, really any PS1 game should work.

My first impression of this PS1 to HDMI (as that's how I used it) was fantastic: very simple to setup, very few things to deal with when installing this product. Although it did not come with a power adapter, I had a 5v 2amp one lying around. Hook that to the micro-usb cable to the unit, and the unit to the back of your PS1's video out, and using the HDMI cable included I got a nice 720p image to my Vizio flat screen. No issues whatsoever.

The upscaling is done surprisingly well for such a small device, no lines or weird artifacts from the conversion to HDMI are present, and the image in-game still looked nice and sharp. I didn't notice much lag at all, just the terrible control scheme of SH1. And, there was little to no cable clutter - the most I had to do is tuck the HDMI cable a bit.

To test the KanexPro, I removed this device and replaced this simple setup with the AV component cable, the KanexPro, and the HDMI to the TV. It was worse from the getgo, the Playstation splashscreen when the console boots was already distorted and awful looking - like the KanexPro upscaled using interlacing, but didn't de-interlace the final output before going to the TV. It looked terrible at 720p in comparison to the Pound cable, and even worse at 1080p. I immediately removed that setup, and went back to the Pound HD Link cable (what I dubbed the PS1-2-HDMI).

I really enjoy this product. As a new PS1 owner myself, I wanted to get it setup in the simplest way for the modern era of TVs and HDMI signals, and this was the right way to go about it. An easy recommendation from me to any PS1 owner. I cannot speak of it for the PS2 however, keep that in mind.
阅读更多
18 个人发现此评论有用
加入亚马逊Prime，从此免运费
亚马逊Prime会员可享海外购美/英/日/德跨境免邮，全年无限次！更有免费无限次阅读电子书服务
> 立即加入
了解我们
合作信息
帮助中心和购物指南