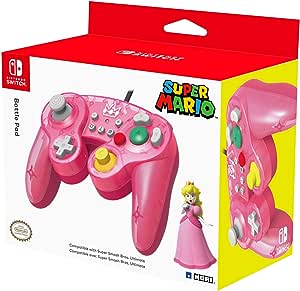 New challenger approaching! HORI is bringing it back to the old school with the Nintendo Switch battle pad. Gamecube-style contours with traditional c-stick will feel at home in the hands of any smash Bros vet, but the battle pad's extra features set it apart from the Pack. Anti-snapback Tech for increased stick precision, and fast-action digital L/R & ZL/ZR for Hyper response speed, and textured grips to keep the battle pad firmly in place - in even the most heated battles. Swap L/R & ZR/ZL functions to play how you want, or get really wild with Turbo settings. Wired USB Controller with 10 ft cable. Featuring your favorite Nintendo characters & colors - choose your fighters and Gear for battle! Officially Licensed by Nintendo.
model_number: NSW-135U
part_number: NSW-135U

Dennis Gagliardotto
5.0 颗星，最多 5 颗星 Slick, responsive, and royal.
2018年11月28日 - 已在美国亚马逊上发表
颜色: Princess Peach已确认购买
It's a beautiful GameCube-style controller with the pallette inspired by Princess Peach, and it feels great with a textured grip in the back to make sure slipping of the hands is a rare occurrence and that gameplay is as optimal as can be. Feels great in the hands and looks great when not in use. HORI really knocked it out of the park with this one - especially with the translucent shell.
阅读更多

Sam Lockshin
5.0 颗星，最多 5 颗星 Best Third-Party GameCube Style Controller
2019年3月14日 - 已在美国亚马逊上发表
已确认购买
Disclaimer: My review mainly focuses on comparing this controller with other third-party "GameCube"-like controllers. I will speak to its merit mostly within these comparisons.

I have the Hori, PDP and wireless PowerA GameCube-style controllers. This is my favorite of the bunch. I mostly play Smash Bros though all controllers are compatible with most of the Switch library. This is worth noting in case you want a controller that can play more games than Smash and don't prefer or want to pay the Pro controller price.

Further disclaimer: All three of these "GameCube" controllers feel more similar than different. The minor differences, however, are what make me prefer the Hori over the other two. If you really like the look of one over the other, it may be worth to buy on those grounds alone. (Or purchase all three like me.)

I prefer the button feel of the Hori over the other two. The Hori buttons are a bit more supple and don't "click" as much as those of the PDP and PowerA, rendering a more smooth and "less-cheap" plastic feel. The difference in feel isn't that noticeable, however.

The analog and C-sticks on the Hori also feel the best among the three. The travel distance on the PDP is WAY too long (probably its biggest knock) while the sticks on the PowerA are really tight, small and need to be broken into.

I prefer the "new" trigger types of the PDP and Hori over the "classic" GameCube-style triggers.

I like the weight of the Hori. It has the lightest weight of the three, which I also prefer. This does make it feel a bit more fragile than the other two. It still has a nice build quality, though. I would call it sleek.

I think the size of the Hori controller is perfect. I have adult man hands and the PDP feels slightly large while the PowerA definitely feels small. (The PDP didn't feel that way until I tried the other two, though.) The Hori definitely has the best fit in the palms.

All in all, the Hori gains my favor because I prefer all the minor characteristics that separate it from the other third-party GameCube-style controllers as described above. If you absolutely need wireless, go with PowerA. If you like a sturdier-feeling controller, go with PDP. If you prefer some of the characteristics I do, then definitely go with the Hori. (I also think the Hori has the best aesthetics.)

Just a few more comments specific to this controller:

My controller has always been responsive to button inputs. Not sure what that's about in others' experience. Perhaps a defective product or the controller wasn't taken care of properly. The Battle Pad is a bit more fragile-feeling than the others so one good drop may mess it up. Just speculation.

The only glaring con of the Hori Battle Pad is an annoying red light stays on while the triggers are swapped to match the trigger configuration of the Pro controller. I put a piece of electrical tape over it. Not enough to knock it a star but a nuisance enough to bring it up in case this is a major turnoff.

E
2.0 颗星，最多 5 颗星 Do not recommend for serious smash players
2018年12月30日 - 已在美国亚马逊上发表
已确认购买
PLEASE READ THIS SHORT REVIEW IF YOU ARE SERIOUS ABOUT SMASH!!
The calibration on this controller is the most frustrating thing if you take smash competitively. If you go to the calibration menu, you can see that there is a strange gravitation towards the X and Y axis. This means if you hold the analog stick directly up and SLIGHTLY to the left/right, the system will still register that as straight up. This is frustrating as i would attempt to use an up-aerial against an opponent slightly diagonal of me and i would either jump straight up or overshoot and miss. This is frustrating because other than that, this is a really good controller. I love the grip and the shoulder buttons but the calibration makes it a liability to use.

Oh and it also has a turbo button so its not tournament legal.
阅读更多
7 个人发现此评论有用

123mb
1.0 颗星，最多 5 颗星 Don't let the awesome designs fool you, this controller is very cheaply made
2019年2月15日 - 已在美国亚马逊上发表
已确认购买
I love the way this controller looks, when I first bought it, I was put off by the rough grip that feels like concrete but I learned to actually like that, it worked fine, although the triggers were very inconsistent, one felt a lot looser than the other but that didn't bother me that much until the left bumper quit on me. I thought this may be just bad luck, maybe mine had a defect or something, so I remapped the controls so I could play Smash Bros without the particular button. A few days after that, the C stick stopped working as well. I've been very lenient with this controller because of how much I love the design, but with no c-stick, I can confidently say this thing is junk, no guarantee it will or will not work, it's your gamble.
阅读更多
4 个人发现此评论有用
加入亚马逊Prime，从此免运费
亚马逊Prime会员可享海外购美/英/日/德跨境免邮，全年无限次！更有免费无限次阅读电子书服务
> 立即加入
了解我们
合作信息
帮助中心和购物指南