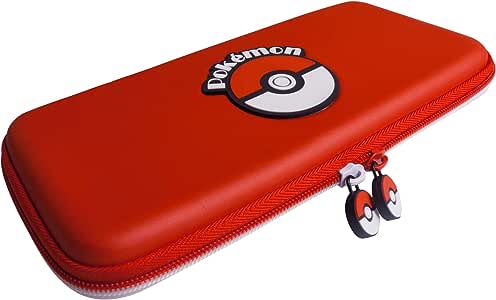 Tally
5.0 颗星，最多 5 颗星 Great product
2020年2月4日 - 已在美国亚马逊上发表
已确认购买
I got this for my brother for Christmas and it came in great condition, and he absolutely loves it for his Nintendo switch!
阅读更多

Michael Kerner
3.0 颗星，最多 5 颗星 Maybe Catch Em All?
2018年11月18日 - 已在美国亚马逊上发表
Honestly, what can do I adore about Nintendo other than the fact that they have had excellent video games, thanks to the Switch. Overall, Nintendo really revised themselves after the despairing sales of Wii U. They needed a great video game system with strong games like Super Mario Odyssey & they delivered for so many gamers. But honestly, while the Switch has been red hot, I wish I could actually say about some of the accessories that have came out for the system, because they have only catered to one way of playing with the hybrid console. Third-party companies haven't really had the best interest for the hard core Nintendo fan. While they have had some moments, they just haven't been making the best accessories. This Pokemon hard shell case for the Nintendo Switch works fairly well, as you can easily store the Switch console, and a few titles like Sonic Mania Plus and Mario Tennis Aces. While it does seem smooth and snug, unfortunately there are a few faults with the Pokemon case. One of them is that I do wish there was a bit more storage for a few extra joy-cons or a USB cable to you can charge up the Switch as you go. Another one is that the logo isn't as strong as the insignia on other Pokemon themed cases. I found a couple of others worked better for me, like the one with the standard poke' ball. Overall, it is a fair case for the Nintendo Switch, but you are better off spending your money elsewhere.