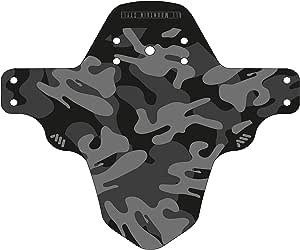 Amazon Customer
3.0 颗星，最多 5 颗星 Nice, but buy your own zip ties.
2019年4月20日 - 已在美国亚马逊上发表
颜色: 黑色/白色已确认购买
At $15.99, I knew I was paying a lot for a piece of plastic. It’s a very nice piece of plastic. But considering your hefty profit margin, could you guys at least throw in the zip ties? That was disappointing.
阅读更多
10 个人发现此评论有用

Michael Oryl
4.0 颗星，最多 5 颗星 It's reversible, for what it's worth
2019年7月9日 - 已在美国亚马逊上发表
颜色: 橙色/黑色已确认购买
I bought the black/orange version because I had been intending to use orange as the accent color on my new Santa Cruz Chameleon, which is equipped with a Fox Rhythm 34 fork. My wife, the resident fashion expert, had different thoughts. She thought I should go with all black, and then suggested that I just turn the mud-flap upside down when I installed it. That worked perfectly since there really is no top or bottom side of the device, it's just that there's only color on one side. So if you want black, you've got black.

I've not had a chance to try it out in the mud yet, but it's been raining for days, so I'll update soon enough. I can say that installing it was pretty simple, provided you are able to supply your own zip ties since the package comes with none.

Update July 10th, 2019: I've uploaded a photo from after a somewhat muddy ride. You can see in the photo that, while the mudgard did pick up a decent amount of mud, it didn't really prevent much mud from hitting the frame. The head tube and fork have been spared, but little else. My face still caught a decent amount of mud as well, since it really isn't protected by the mudguard unless you are positioned a decent amount forward over the bars. It's better than nothing, though, and it looks good. I'm still happy, but I think a bit more length or more of a curve that follows the wheel would have been a lot more effective.

B review
4.0 颗星，最多 5 颗星 Pricey. No zip ties. Good style.
2019年5月23日 - 已在美国亚马逊上发表
颜色: Camo/Black已确认购买
These are pricey for what they are. A cut piece of kydex with no zip ties to install them. They really should include zip ties for the price. Haven't had a chance to test. Fit a 26" fat bike. Hopefully they work.

Update: they are just big enough to keep mud out of your face, but mostly useless on the rear. I used the extras to zip tie around electronics on the e-bikes.
阅读更多

Harold Goff
5.0 颗星，最多 5 颗星 Looks great and well made.
2020年2月19日 - 已在美国亚马逊上发表
已确认购买
All "mud guards" should be labeled "stanchion guards"! I have a Fox 34 factory step cast front suspension. That's nearly $1000.00 retail price and cleaning/upkeep can cost more if you don't keep it clean after a muddy ride. This isn't a MUD guard for YOU. I'm rolling with 29 inch tires and if it's muddy, your going to get (bike too) muddy no matter what. It's more important to keep your stanchions relatively clean DURING your ride in rainy, muddy weather. It will save your seals AND your expensive forks from deteriorating too soon. If your worried about your eyes, get a good pair of glasses or goggles. Buying a mud guard to protect your eyes/clothing is ridiculous. This product works as advertised and looks great. The skull IMO, looks sharp and is the best choice as it has the best contrast. See my pics. Installation took two mins but you must supply four zip ties. Not a deal breaker for me.
阅读更多

Michael McCorkle
5.0 颗星，最多 5 颗星 Does the job with little bonuses
2019年9月22日 - 已在美国亚马逊上发表
颜色: Roning/Grey已确认购买
Does what it's supposed to do, block stuff from smacking me in the face. Didn't know this when ordering, but the package ( if that's what you want to call it) had instructions for install right on it. That was an awesome addition, I mean it is a simple product but that extra care was nice. The picture on the guard haven't worn off or anythjng, we will see how it holds up as I put it under more pressure
阅读更多
2 个人发现此评论有用
加入亚马逊Prime，从此免运费
亚马逊Prime会员可享海外购美/英/日/德跨境免邮，全年无限次！更有免费无限次阅读电子书服务
> 立即加入
了解我们
合作信息
帮助中心和购物指南