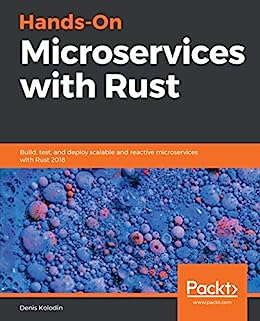 Microservice architecture is sweeping the world as the de facto pattern for building web-based applications. Rust is a language particularly well-suited for building microservices. It is a new system programming language that offers a practical and safe alternative to C.

This book describes web development using the Rust programming language and will get you up and running with modern web frameworks and crates with examples of RESTful microservices creation. You will deep dive into Reactive programming, and asynchronous programming, and split your web application into a set of concurrent actors. The book provides several HTTP-handling examples with manageable memory allocations. You will walk through stateless high-performance microservices, which are ideally suitable for computation or caching tasks, and look at stateful microservices, which are filled with persistent data and database interactions. As we move along, you will learn how to use Rust macros to describe business or protocol entities of our application and compile them into native structs, which will be performed at full speed with the help of the server's CPU.

Finally, you will be taken through examples of how to test and debug microservices and pack them into a tiny monolithic binary or put them into a container and deploy them to modern cloud platforms such as AWS.

This book is for developers who have basic knowledge of RUST, and want to learn how to build, test, scale, and manage RUST microservices. No prior experience of writing microservices in RUST is assumed.

JeffG
5.0 颗星，最多 5 颗星 It's available now in Kindle - excellent book
2019年2月15日 - 已在美国亚马逊上发表
已确认购买
Excellent book. Just getting into second chapter now, but was so impressed with first that I decided to go ahead and review it. This is the book I've been looking for. Real world examples with excellent guidance on using various rust libraries in general, not just how to use rust for microservices, but is excellent from that perspective as well. I've worked through several courses on Udemy, and read lots of online content and watched several conference videos on youtube, but those will only get you so far. Real world examples are the key to really learning a language, and this author took the right approach. The author is also the creator of the Yew framework that's a web assembly UI framework written in rust.
阅读更多
6 个人发现此评论有用

ScarletCarson
1.0 颗星，最多 5 颗星 Books really need more content than a couple dependency recommendations
2020年12月27日 - 已在美国亚马逊上发表
已确认购买
The difference between a blog post and a book is the amount of content... I should feel comfortable at a few chapters that I am learning something. That isn’t the case with this book, a few chapters in and I’m still getting recommendations for using rust instead of learning what makes a good rust micro service. Skip this book as there are more informative blog posts everywhere you look.
阅读更多
2 个人发现此评论有用

Alex Eden
4.0 颗星，最多 5 颗星 I want so much to give this 5 stars, but holy typos
2020年9月12日 - 已在美国亚马逊上发表
已确认购买
I skimmed through the book as soon as I got it, and it indeed fills a MASSIVE gap in the existing resources available to learn rust beyond a beginner level. But, I'm about a hundred pages in now, and there are. so. many. typos. Ultimately I can figure out how the sentences were intended to be written, but the editor(s) was clearly asleep at the wheel.
阅读更多
2 个人发现此评论有用