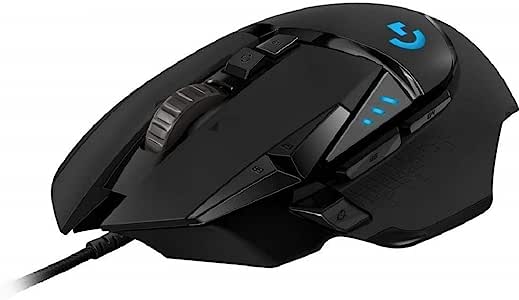 RotCorp
5.0 颗星，最多 5 颗星 Great mouse, except the one flaw
2018年12月1日 - 已在美国亚马逊上发表
样式: Hero已确认购买
I'm no 187329871 IQ pro gamer it's got enough buttons for me. The button location are solid enough for me to be satisfied the only issue I have with this mouse is that the scroll wheel now spins freely and is one hell of a headache playing most fps games as the wheel usually switches weapons in most games.

So for example you run out of ammo in game and want to switch to your secondary.. well you'll switch to it but switch right back about 3 times. Kind of a deal breaker for clutch moment gaming.

Turns out i'm an idiot. There's a button that locks and unlocks the scroll wheel..LMAO sooo yeah no this mouse is great i'm just not smart enough to properly utilize it.

David Likes tech
1.0 颗星，最多 5 颗星 GOT A USED ONE BE CAREFULL
2019年2月2日 - 已在美国亚马逊上发表
样式: Hero已确认购买
I have not even used it yet I bought this and I opened it up Immediately notice that it was used looking at the bottom gliders.. upon further inspection I opened the weight casee and low and behold fingerprint smudges and scratches.
Im pissed
阅读更多

Shi Hao
4.0 颗星，最多 5 颗星 Overall not significantly different from the original, but adds support for the updated software.
2018年10月25日 - 已在美国亚马逊上发表
样式: Hero已确认购买
Let me start by saying that I've used a lot of gaming mice, like, over 50 of them. The Logitech g502 was always a quality mouse and tons of people love the thing just based on the design and overall quality of the mouse; That being said, there are a few things to consider if you're thinking about getting this one in particular.

The Pros of this mouse are fairly straightforward, and are as follows:
- Comfortable shape for most right handed people, but should be more comfortable for people with medium to large size hands.
- Good build quality which easily places it in the same category as other 'premium' around this price point or even a bit higher.
- Scroll wheel: this is one of my personal favorite features of the mouse. Allows infinite scroll to get through annoying EULA pages quicker and also quickly raise or lower volume on YouTube or other video streaming sites, but without sacrificing the much needed precision of the standard mouse wheel steps. Feels satisfying to use, but it is made of metal, which leads to a negative I'll be mentioning later on.
- Sensor: The Logitech Hero sensor has been tested numerous times and found to be roughly on par with the PMW3360 series sensors (including the 3366 on the original g502) while being advantageous for usage in wireless mice due to the lessened draw of power which allows for a longer battery life.

The Cons of this mouse make it hard to recommend to everyone, and are why I don't usually recommend it as a first choice.

-Weight: My god. This thing is one of the heaviest mice I've used for an extended period of time. I don't know exactly how much this weighs, but it feels pretty similar to the original, which I believe weighed in a little over 130 grams. Most gaming mice target a weight of 100g or LIGHTER, since lowering the weight of the mouse will make extended use easier and will allow for a greater degree of control.
- Not a truly "safe" shape, this may or may not matter to you, but I felt that it's worth mentioning. Obviously this is a mouse for right handed people, and it may not necessarily be a great fit for you if your hands are very small (I have very small hands and cannot reach the sniper button at all, but the mouse is still comfortable).

I would say it's a top tier mouse, but only if you can look past the weight. I would recommend that, as always, if you have the ability to do so, you should go to a local store and try some of the mice out to see which feels best to you, and make your decision after you have an idea what type of mouse shape you want.

I won't recommend that you do or don't buy a product, so I'll leave it at that.
阅读更多
161 个人发现此评论有用

HLF
5.0 颗星，最多 5 颗星 Really well made mouse. Logitech did it!
2018年10月9日 - 已在美国亚马逊上发表
样式: Hero已确认购买
This review is for the Hero version of G502. I have stopped using Logitech mice since they discontinued G9. I have been using Roccat Kone XTD since then that died after serving me for over 5 years. After reading reviews about G502 I decided to give it a try as I really liked the overall design and feel , it reminded me of G9.

So when I learned they are refreshing the 502 with a new sensor I was skeptical to pay $30 more for the new one. Now that I used it I am glad I did. The refreshed model has a really thick and flexible cord that was apparently a major weakness in the original 502. Couple that with a really awesome sensor that is super accurate and sensitive to slightest movements and tracks on any surface (seriously I tried everything from a white paper to the palm of my hand) and you have a potential winner. However, the best part of this mouse is not that or the the materials that they used which also feels really nice and durable.

While subjective and relevant to how big or small your hands are for me the way the mouse sits in my hand and how easy it is to access the buttons are the best indicators . The buttons themselves feel very satisfying to press thanks to the spring loaded mechanism. Last but not least is the scroll wheel. This... this scrollwheel I can probably write a whole paragraph on how good it is... Not only does it have the infinite mode that rolls beautifully but also its made from METAL. Its a nice chunk of metal that is just better than a plastic one in every way. I dont think I can go back to plastic mouse-wheels after using my G502. You might never use the 16000DPI sensor but if you used G502 and similar mice in the past and are due for an upgrade the refresh 502 is totally worth the money Logitech is asking for.
阅读更多
54 个人发现此评论有用
加入亚马逊Prime，从此免运费
亚马逊Prime会员可享海外购美/英/日/德跨境免邮，全年无限次！更有免费无限次阅读电子书服务
> 立即加入
了解我们
合作信息
帮助中心和购物指南